When Trayvon Martin was killed, the whole world was suddenly confronted with the terrifying reality of the “Stand Your Ground” laws – an approach to “self-defense” that removes from a would-be-shooter the onus to back down from confrontation. Stand Your Ground is a law that specifically grants a license to kill for merely feeling threatened. Of course, given the news-stoked paranoia surrounding black folks in the United States and Canada, simply being black is a threatening act, thus justifying the lynch-mob fantasy of every nutjob with a gun and a nursed belief that life was better in the “good old days” when black people knew their place. Now, in order to avoid getting shot (with no consequence to the shooter), black folks had to make sure they were super-turbo-extra non-threatening.

Now I am not sure that the removal of legal punishment makes murder more likely. While there are undoubtedly people who go out with the intention of murdering black folks, they are rare, and I sincerely doubt that they factor legal consequences into their plans. The issue with Stand Your Ground laws is that they make confrontation more likely. People know that they have a right to accost ‘threatening’ people, and that if push comes to shove, they are armed and can take matters into their own hands. Stand Your Ground is a nearly perfect equation to result in the death of black folks. Add the nascent fear of The Negro to the fearlessness associated with packing heat, subtract the legal obligation to avoid conflict, and what’s the result? 73% legally justified homicide against black folks:

A Tampa Bay Times analysis of almost 200 cases — the first to examine the role of race in Florida’s “Stand Your Ground” or “Kill at Will” laws — found that people who killed a black person walked free 73 percent of the time, while those who killed a white person went free 59 percent of the time. Questions of race have surrounded Florida’s controversial “Kill at Will” law since George Zimmerman killed unarmed black teenager Trayvon Martin in February. The law made national headlines because it was part of a system of laws that helped keep Zimmerman out of jail for more than a month.

Now I know a lot of readers are here from the United States, so I don’t know if y’all find this nearly as batshit insane as I do. First of all, the idea of someone walking around with a gun strapped to their hip is absolutely nuts here in Canada. Sure, if you’re at a hunting lodge or a woods guide or something it’s not uncommon to walk around with a rifle, but to walk around the streets of your neighbourhood strapped is fucking crazy. 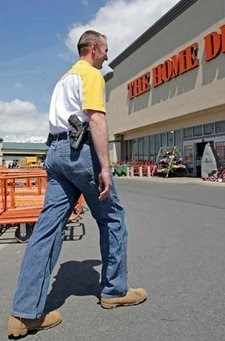 This doesn't happen in Canada

It’s worth noting the 14% discrepancy in conviction rate between races. It should be noted that black decedents were (apparently) more likely to be found with weapons on their person, or caught in the commission of a criminal activity. Of course, knowing what we know about the way in which police will absolutely lie through their teeth when backed into a corner (or when it suits them), you are free to take that figure with a grain or two of skepticism. Whatever the reason, Florida’s gun laws are disproportionately stacked against its black citizens to the tune of 14%.

Like yesterday’s post, any one single aspect of this story could be called into question. This effect is not necessarily due to a racial bias, one might argue. No, but at some point you have to explain why this shit always happens to those lower down on the power ladder, whether that be black people or women:

Marissa Alexander is another victim of Florida’s infamous Stand Your Ground law, proving that Florida statute 776.013 is not for battered women or people who won’t shoot to kill. When attacked by her husband in her home, with an order of protection in place, Marissa Alexander shot into the ceiling, instead of into his body, to scare him away. She is now sitting in a jail cell, awaiting sentencing for assault with a deadly weapon.

Ms. Alexander requested immunity from prosecution but her claim of self-defense based on the Stand Your Ground Statute was rejected. She is now sitting in the Pretrial Detention Facility in Jacksonville FL, Duval County awaiting sentencing – up to 20 years in prison. That is more than George Zimmerman could get it if he is convicted of manslaughter.

Is that the problem? Unless you shoot to kill, are you really in reasonable fear of bodily injury or death? Or is the bias against battered women, specifically battered black women, still going strong in America’s court rooms?

Evidently so, since the State of Florida cited this as part of their reason for denying her immunity from prosecution under the Stand Your Ground statute:

instead of shooting at [husband] (as one would do if they were truly in fear of their life) the Defendant chose to fire mere inches to the right of his face to scare him.

So to make this clear, according to Florida law, only one of these things is illegal: 1) hunting down, confronting, and murdering an unarmed 17 year-old on the streets; 2) firing a warning shot in self-defense against your abusive ex-husband instead of shooting to kill.

Again, any of these things can be explained away – they’re just anecdotes. But when we know what we know about the background of radiation of racism that permeates our society, and being good skeptics, we have to decide which is the more extraordinary claim: that racism plays a role in these extremely unjust legal outcomes that are disproportionately stacked against black people; or that black people are just really really fucking unlucky.

Because I am an atheist: Carina » « Kiva project update: request for projects