If there is one phrase I would like for people to stop using, at least in approving tones, it’s “common sense”. What I’m sure is meant by the term, when used to praise someone’s rationality, is that someone exercising good “common sense” is making a decision based on good, clear thinking as opposed to convoluted and self-contradictory premises. The problem is that the world is often a complicated place that requires convoluted, or at least non-obvious thinking. Too often, “common sense” simply means adherence to stereotypes and cultural memes in the place of evidence-based reasoning. As I’ve said before, the moment that someone makes an appeal to “common sense” is the moment that I stop listening to them.

One of the things I have noticed is how frequently arguments based in “common sense” are used to defend positions based in conservative ideology. I lived in Ontario during the back-to-back reign of premier Mike Harris – an era known by the political monicker “the Common Sense Revolution”. Of course the idea of a conservative revolution boggles the mind, but we’ll deal with counter-intuitive political branding another time. What I remember is that these supposedly revolutionary ideas involves crippling cuts to the public sector (particularly nurses and teachers), expansion of the private sector and a poisonous political climate.

Now, it is entirely possible that, because of my own unabashed liberalism and the very human tendency toward confirmation bias, my association between political conservatism and arguments from “common sense” is merely my brain selectively pairing things I think are stupid. After all, I have heard people from all walks of life, my own liberal father included, talk about “common sense”. A new study, however, suggests that there may be some evidence to support my broad-brush generalization:

The authors designed 4 separate experiments to test the hypothesis that, when the brain is taxed by the need to deal with other stimuli, it solves problems in ways that are consistent with political conservatism. Their contention is that since conservatism is marked by acceptance of hierarchy, emphasis on personal responsibility, and investment in the preservation of the status quo, and that these attitudes have been shown to correlate with low-effort cognitive processing in the literature, that it should be possible to observe a relationship under experimental conditions.

Regular readers may be reminded of a similar study that we looked at a couple months back, where lower cognitive performance was associated with conservatism and racism; however, the Eidelman study’s hypothesis is subtly different. Rather than looking for patterns among those who were less cognitively agile, this study took a non-stratified sample of brains and burdened them with various tasks, in order to see what happens when ‘normal’ brains are stressed and must solve problems.

If the hypothesis is correct, people whose brains are trying to perform multiple tasks will demonstrate a preference for low-effort cognition (i.e., their brains won’t be able to do complex, nuanced processing and will instead rely on stereotype-based problem-solving – a.k.a. “common sense”). These low-effort pathways will be associated with an increased likelihood to respond favourably to conservative arguments rather than liberal ones.

In the first study, people leaving a bar were asked to respond to a political questionnaire in exchange for a blood alcohol content (BAC) test. The data were compared to see if there was an association between being drunk (arguably a taxing state for the conscious brain) and political conservatism.

In the second study, participants were asked to fill out a political affiliation questionnaire under one of two conditions. The experimental group filled out the questionnaire while being asked to identify a number of sounds being played into headphones. The control group was given no such distraction task.

In the third study, participants were asked to recall items from a list of ideas presented to them early in the experiment. The experimental group was time-limited, being presented with the words for 1.5 seconds. The control group had 4.0 seconds to respond.

In the final study, participants were asked to express their level of agreement with a number of political statements under different conditions. The experimental group was asked to give their immediate answer without second-guessing themselves. The control group was asked to take their time and consider each question carefully.

The hypothesis, as explained in the abstract, was supported by findings from all four studies. In each case, when participants were under cognitive duress, they allied themselves more readily with conservative opinions. 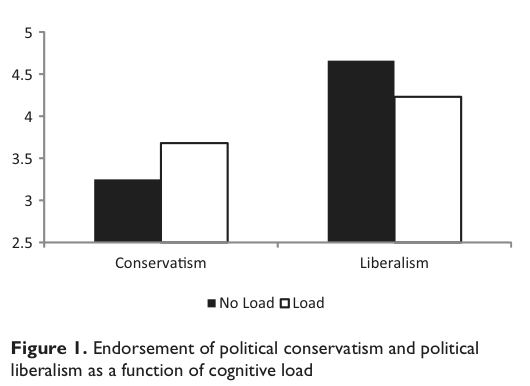 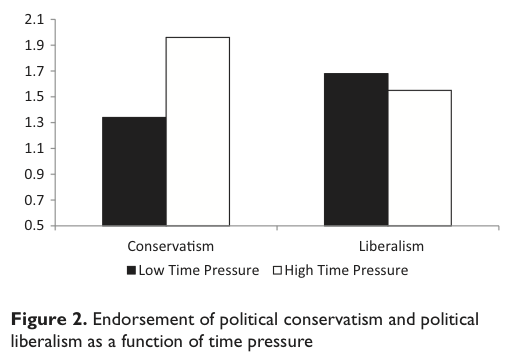 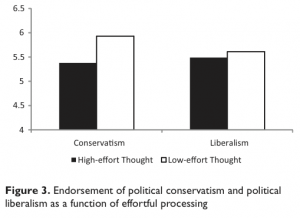 As you can see from the above tables, the taxing the brains of participants caused them to more closely affiliate with conservative ideology, whether that tax came in the form of distraction, time pressure, or the depth of thought each problem was given. Also, booze makes you more conservative (and yes, they measured to see if conservatives were more likely to get drunk).

This study was particularly interesting because it confirms my suspicion that people are just people, and anyone can be talked into a bad idea (like conservatism) under the right conditions. It tessellates well with the Hodson/Busseri finding that lower cognitive ability leads to conservatism – after all, the easier it is to ‘max out’ a brain, the more likely a person is to reach for low-effort cognition. There are a number of questions left unanswered by this study; namely, why people whose brains are capable of complex, nuanced thought still adhere to conservative ideology. After all, these findings would suggest that smart people with ‘good brains’ are just too clever to be conservative. The truth is likely something far more complex than that – if I had to guess I’d think that your home environment, role models, and familiarity with ideological positions plays a large role in worldview formation as well as cognitive workload.

Science is not generally been kind to conservatives, and this paper is no exception to that trend. What these experiments strongly suggest is that the reason why arguments grounded in “common sense” are so popular within conservative circles is that they are easy to recall and ‘reason’ through. What steps we can take to move people away from relying on “common sense” as a problem-solving tool is very much an open question. That being said, whatever answers there are to this question, they will likely be complex and requiring of careful consideration. Conservatives are going to hate them.