Once again, our esteemed federal government has handed us a veritable flood of exciting politics news. This isn’t the kind of excitement that I usually get happy about – it’s the type that makes the adage “may you live in interesting times” a curse rather than a blessing. We’ll skip my usual preamble and just get right to the good stuff.

A Scottish woman married to a Canadian wound up having their baby in a hotel room — across the street from a Vancouver hospital — after she couldn’t get provincial health-care coverage. “Luckily it all went OK and I was able to cope with the pain,” said Lynne Aitchison, who delivered baby Ziggy in the hotel bathtub, without medication or complications.

However, the province told her she couldn’t have any medical coverage because she couldn’t get a letter from the federal Immigration Department verifying her application. She said Citizenship and Immigration refused to give her anything in writing because her application was sitting in a pile with thousands of others, unopened.

So first of all, I need to state unequivocally that I am opposed to naming your child ‘Ziggy’. No child, no matter how untimely, deserves to be stuck with that name. That being said, obviously the greater crime is that someone who, for the want of a letter from the government, was refused medical coverage and had to deliver Ziggy in the bathtub of a hotel overlooking the hospital. Perhaps all of the relevant information is contained within this graph: 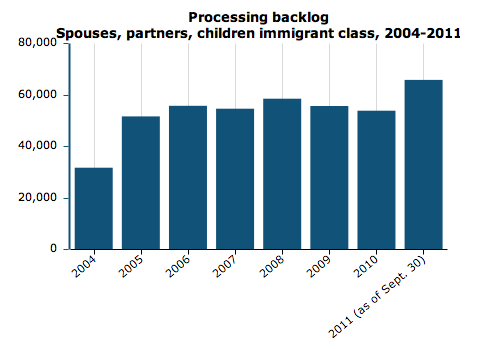 Now if I am interested in being fair (and I usually am), I will have to take Jason Kenney’s word that the problem is that the immigration system is antiquated and needs to be modernized. Even granting that statement as true, there are two things to keep in mind: 1) it has been a problem that started getting worse in 2005 (gee, when did Stephen Harper take power again?) and 2) it has been getting worse, not better, over time. Considering how vital immigration is to Canada’s civic health (and that the economic downturn didn’t seem to affect the backlog), one needs to ask where the government’s priorities have been, that they let the situation deteriorate to this level. Were they asleep?

Why does Tory MP Rob Anders keep falling asleep on the job?

“He was out like a light for about five minutes,” Mr. Lowther said. “He came in late, didn’t ask any questions and then fell asleep. Wow … I couldn’t believe my eyes.” Mr. Anders – the same MP caught falling asleep during Question Period in November in a video that went viral – rubbished Mr. Lowther’s claims.

So this is only funny if you’re particularly cynical. Disrespecting veterans is no laughing matter, especially to a party that has traditionally cast itself as the ‘pro-military’ group. Canada is currently engaged in a war, and as long as politicians are scoring points on the backs of its soldiers, it would be nice if those politicians could at least keep their eyes open long enough to pretend as though they cared. Mr. Anders’ appalling level of disrespect is not funny.

Instead of explaining his behaviour, Mr. Anders accused the veterans advocates of being “in the pocket” of NDP MP Peter Stoffer. “They praised Vladimir Putin, at one point, for the way he deals with veterans, and then he just went on and on praising Peter Stoffer,” Mr. Anders said. “[Mr. Lowther] is the same guy who tried to crash one of the Prime Minister’s rallies and is on NDP press releases.”

It was all the NDP’s fault! They screwed Rob Anders again by being so boring that he fell asleep, and then they cleverly acted reasonably offended in order to trap the totally innocent MP in his cleverly-orchestrated gaffe. Once again, in the name of fairness, Mr. Anders claims that his narcolepsy is a symptom of a car accident. That may very well be true, and it is certainly not his fault if he has a medical condition. However, unless ‘being an asshole’ is also a symptom of the accident, the disrespect charge sticks.

The federal government has given Canada’s spy service the go-ahead to provide information to foreign agencies even when there is a “substantial risk” it will lead to torture, a newly released document shows. Public Safety Minister Vic Toews outlines instructions for sharing information in such cases in a four-page directive to Canadian Security Intelligence Service director Dick Fadden. A copy of the July 2011 directive — secret until now — was released to The Canadian Press under the Access to Information Act.

So there are very few Conservative cabinet members that I can actually stand as human beings. Most of them, based on all the information I have about how they think and how they behave in public, are despicable. But there’s a special place in my heart for Vic “torture is a Canadian value now” Toews. Above and beyond the arch hypocrisy and eagerness to deflect by way of bullying he displayed during the now-notorious “Vikileaks” issue (where publicly-available details about the despicable circumstances leading up to his divorce were released via a Twitter account that was linked to a Liberal party staffer), he seems to have absolutely no shame or sense of human decency when it comes to whether or not it’s okay to torture people.

I would love to have to scour the net for these kinds of stories. There are people who meticulously comb through the news outlets and secret releases and a whole host of other things to expose scandals like this. Any one of these, in a sane universe, would be enough to take these politicians down. But, when filtered through the reality of the apathy of the Canadian electorate, these (and others) don’t even crack their support a little. We don’t live in a sane world – and thus we are cursed to live in interesting times.

Domo Arigato, Mr. Robocallboto » « In which I blur the line unacceptably