Many of the topics we discuss here are personal, at least insofar as race is concerned. We talk about the effect race has on colouring people’s experiences, on how they may perceive identical treatment quite differently. I’ve occasionally shared some anecdotes from my own life to underscore some point or another. This is no accident – race and experiences of racism are incredibly personal, and the facts can often not be divorced from the subjective experience.

That being said, I hope that you haven’t been left with the impression that racism only has interpersonal consequences. From the get-go, I have been trying to convey the fact that attitudes about race work their way into every aspect of our lives, often without our knowledge or consent (and certainly without the consent against whom the weight of racism is pressed).

It is a fact, therefore, that if you scratch the surface of just about any human activity, you will find racism simmering just below the surface:

Blacks are about twice as likely as whites to wind up in the more onerous and costly form of consumer bankruptcy as they try to dig out from their debts, a new study has found. The disparity persisted even when the researchers adjusted for income, homeownership, assets and education. The evidence suggested that lawyers were disproportionately steering blacks into a process that was not as good for them financially, in part because of biases, whether conscious or unconscious.

I spoke recently about the challenge of measuring racism – that it cannot be measured directly, only by stripping away all other explanatory factors. It is a rare study that manages to do that completely, but this one comes pretty damn close. If you can ninja your way around the paywall, the study can be found here*.

This study, much like last week’s, is actually two different experiments with the same model hypothesis: that race plays a role in the type of advice an attorney gives hir client.

Braucher and colleagues identify two different types of bankruptcy filing: Chapter 7 and Chapter 13. Without going into all the details (which I don’t understand fully myself), Chapter 7 can be thought of as “the cheap one”, with an up-front payment and the liquidation of some assets. The authors make this remark:

In practice, chapter 7 seems to maximize the ideal of forgiveness, giving “the honest but unfortunate debtor… a new opportunity in live and a clear field for future effort, unhampered by the pressure and discouragement of pre-existing debt.” (p. 2)

Chapter 13, on the other hand, usually involves 3-5 years of repayment and is much more expensive. The advantage is that this method allows people to hang on to their home or car instead of having it liquidated. However, this means that you are wrangling with bankruptcy for years instead of a one-time procedure that allows you to move on quickly.

The authors hypothesize that racist attitudes extant in attorneys will drive them to recommend differentially between black and white clients, regardless of the other facts of the case.

If the hypothesis is correct, then what we will see is a difference in the type of bankruptcy filings that is explained by race but not by factors like income, location, age, education, or other potentially predictive factors (i.e., race will remain when these other variables are ‘controlled for’ in statistical analysis).

In the first exercise, the authors used data from a questionnaire distributed by the Consumer Bankruptcy Project. These data included all relevant information concerning bankruptcies filed in 2007, including a variety of financial characteristics, a record of attempts to settle debt load with creditors, demographic characteristics (including race), and a proxy variable for the local legal culture.

The results from the survey were very compelling: 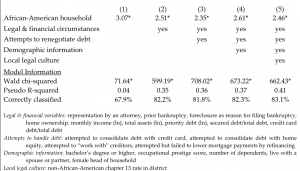 I’ve left the statistical tests for significance up there, but the important information is at the top of the table. You can see that race makes the odds of being steered toward a Chapter 13 bankruptcy are more than 3 times as high for black filers as white ones. This effect diminishes only a little when financial circumstance, filer preference, location and the legal culture are included in the analysis. What persists is the effect of the client’s race.

The results from the second exercise tell much the same story: 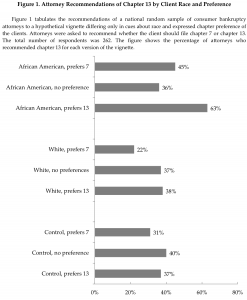 You can see from the pattern of these bars that the ‘white’ clients were far less likely to be directed to choose a Chapter 13 bankruptcy (more likely to be steered toward Chapter 7) than were black ones. When racial cues were not available in the case, the pattern resembles whites more than it does blacks.

What is interesting, and what I will have to discuss another time, is the fact that the authors also included a variable to rate the “trustworthiness” and “competence” of the clients. The results will require a more detailed analysis than I can provide right now, but basically white clients were viewed as being “more competent” and having “better values” if they expressed a preference for a Chapter 7 bankruptcy. This patterns was reversed for black clients.

There is much more in this paper that will have to be left unpacked for now, and I will return to it another day because I really do want to talk about the differences in perception, but the important message to take home from this study is that racist attitudes (that are, probably, implicit rather than explicit) do not just affect our perceptions of events. They have real impact on our lives.

In this case, we see that attitudes about race have a deleterious effect for black people, not because of any dearth of ‘personal responsibility‘ or any other “racial realist” canard, but because white people are seen as deserving of a second chance that blacks simply do not qualify for. While people will swear up and down that nobody ever gave them a handout, or that they’ve pulled themselves up by their bootstraps, what their fanciful narrative neglects is the existence of a white supremacist system that hands out advantages like this based on skin colour.

The authors make a pair of policy recommendations, one of which is to collect more information. The second, and the one that fits the message of this blog closely, is that attorneys need to be educated about the existence of this kind of bias. Whether telling people (especially certain people**) about the possibility of inadvertent racism will actually fix the problem is certainly an open question, at least they will no longer be able to claim ignorance of the problem.

*The paper is ‘in press’, meaning that it will be published in an edition of the journal that is, as yet, not available.

**Hilarious and unimportant factoid from the study. The attorneys surveyed were asked to identify their own race (to see if the race of the attorney played a role). One participant identified hirself as a “Confederate American”. Oh America, you so silly.

Through the hating glass » « What actual honour looks like