I don’t have the freedom, courage, or fortitude to actually sleep in a tent in the middle of downtown Vancouver. I don’t want to lose my job, and I’m a pretty big wimp when it comes to organized protest. That’s why I consider myself lucky that there are others out there who are willing to fight on my behalf in ways that I cannot. It behooves me, therefore, to join in the fight the best way I know how – by writing. In addition to the handful of posts on the Occupation I’ve posted here, I’ve been regularly taking to the walls of my Facebook friends and trying to counter the anti-occupation memes that crop up in seemingly-inexhaustable supply.

One such conversation (which appears to be ongoing) came from a former roommate of mine, who is one of the most erudite and knowledgable guys I know. Despite that fact (for reasons I am coming to understand much better), he is quite conservative and, resultingly, openly contemptuous of Occupy. His opening salvo was to tell everyone protesting in North America and Europe to “get over themselves”, which I didn’t quite understand. I asked him if only people from Sudan were allowed to protest, because there was always someone worse off somewhere else.

Nearly immediately he went on a wild tangent about how the tactics used by the protesters were illegal, about how they weren’t proposing concrete solutions, about how they did have concrete solutions but that he didn’t like them… basically everything except the original argument. I have heard many others express his bewilderment in other words, but consistently fail to provide anything but red herrings and straw men by way of explanation. This fact suggests to me that people’s opposition to Occupy has little to do with the actual movement, but a series of myths that have been cultivated about the system being protested.

Which is a shame, because even here in Vancouver there is plenty for them to be upset about:

Ask a British Columbian about taxes, and you’ll likely hear some variation on the idea that everyone should pay their fair share. Most people assume that the wealthy pay more, not only in straight dollars, but also a higher tax rate as a share of their income. So they would be shocked to learn that, in reality, that is not how our provincial tax system works.

Opponents of the Occupy movement in Canada have criticized their (our) use of the “we are the 99%” rhetoric, given that the division between the wealthy and everyone else is not nearly so polarized north of the 49th. Downward comparisons are a hell of a thing, but it’s far more worthwhile to focus on making things better, rather than simply patting ourselves on the back for not being the worst in the world.

This report, from the Canadian Centre for Policy Alternatives, points out that while income taxes have dropped in British Columbia over the past 10 years, provincial revenues have been supplemented by increasing the share collected from regressive taxes – taxes that have a greater effect on the poor than the wealthy. As a result, we see a figure that should disturb us: 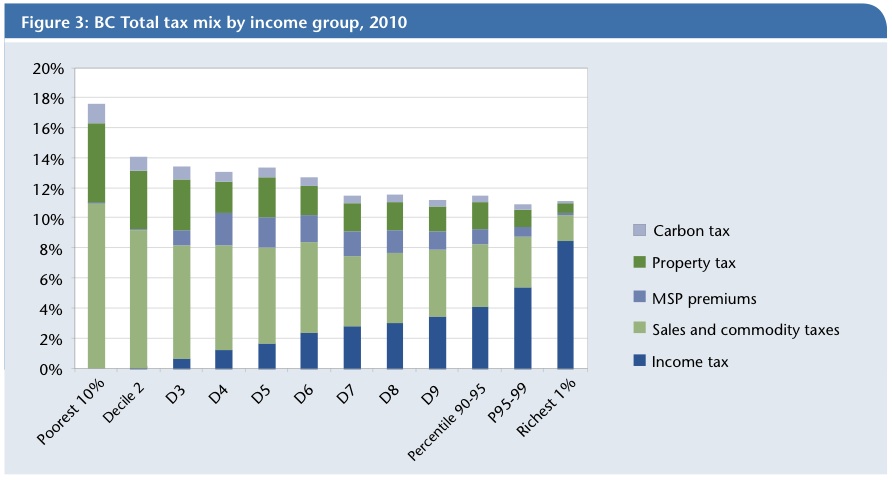 It turns out that the highest proportional tax rate is paid by those least able to afford it, while those in the top 5% pay the least. Even someone who thinks that the Occupy protesters are a bunch of lazy hobos can’t deny that there is something manifestly unfair, unCanadian about asking the poor and the middle class to pay a greater share of the tax burden so that wealthy people can coast – not in terms of absolute dollars but in terms of what those dollars mean to the people giving them up. Keep in mind that this relationship has been getting worse in the past 10 years.

But wait, you may be saying, it’s not fair to punish the wealthy because the poor are too lazy to work. After all, they should have just worked for their success instead of waiting for a handout! It’s not like they were born poor:

Child advocates have given B.C. another failing grade when it comes to serving children in need, according to the eighth annual report card on child poverty released by the First Call Child and Youth Advocacy Coalition on Wednesday. It is also the highest child poverty rate of any province for the eighth consecutive year, according to the report, which examined 2009 figures from Statistics Canada and used the agency’s low-income cut-offs before tax as a measure of poverty. It found the number of children living below the poverty line in B.C. was 137,000, or 16.4 per cent, in 2009 — an increase of 16,000, or 1.9 percentage points, over the previous year.

So while successive provincial governments have been changing the tax code to reduce the effective tax rate for the highest income earners, the number of children born into poverty has been increasing. It should not be overlooked that an immensely disproportionate number of those children are First Nations. We know that poverty is a notoriously difficult cycle to break, and has effects that stretch far beyond simple lack of money. Instead of doing the smart thing and reducing poverty, we have instead decided that it is far better to lower the income taxes required from the wealthiest British Columbians, hoping (I suppose) that poor people will just fall into the ocean.

What we are left with is a system in which the wealthy, a highly-courted constituency, are increasingly favoured in our taxation policies, while the rest of us are left to pick up the tab. We are past the point where the common trope of “wealth redistributing socialists” even applies – the rich are paying less than the poor. We have crossed the midpoint between socialism and plutocracy. Anyone with even a vestigial sense of fairness and decency will see that a major change is needed not only in our tax policy, but in how we think of the poor, and in what we see our role as Canadians being: are we steering the political ship where we want it to go, or are we merely along for the ride?

The forces fighting for such a change are mobilized. They are energized. They are committed, and they are occupying our public spaces to bring these realities to the forefront. While I may not have what it takes to join them on the front lines, I am happy to play my role as herald. We have a problem, and until we can gather the political will to start fixing it, the Occupation must continue.

Thoughts on the state of the occupation – update » « Happy about this too, but for an entirely different reason