If any of us could trace our family tree back far enough, right to the very beginning, then we might expect that we should all converge on LUCA, the Last Universal Common Ancestor, the organism from which all life on Earth evolved. But as Addy Pross writes in his book What is Life? (2012), the tree of life metaphor that Charles Darwin introduced may break down once you get as far back as the Bacteria, Archaea, and Eukarya kingdoms.

Carl Woese, whose life work focused on such phylogenetic analysis, argues that early cellular organization would have been loosely connected and modular, that evolution would have been communal, not individual, so that such entities would not have even had stable genealogical records. This then suggests that the root of the universal tree of life, LUCA, may be something of an artefact which derives from forcing a tree representation on the sequencing data. If true, that statement has important consequences. It means that the nature, or even the very existence of a discrete LCA remains uncertain. That of course makes any phylogenetic extrapolation regarding pre-LUCA entities even more questionable. After almost four decades of phylogenetic analyses the methodology has had to undergo significant reassessment. The tree of life, at least for archaea and bacteria, has been replaced by a web of life. A tree topology of course leads back to a truck and to roots, but a web topology, unfortunately, does not lead anywhere; a web topology is not a useful source of historical information. (p. 91-92)

But suppose we do not go quite as far back as that and try and see what our ancestor might have looked like in the Cambrian period, about 500 million years ago. A paper in the latest issue of the journal Nature reports on finding some of the earliest fossils from that period belonging to a class known as deuterostomes. These 45 specimens date back to 540 millions years ago, beating the previous record by about 20 million years. According to the paper, it had some interesting features.

The bag-like body bears a prominent mouth and associated folds, and behind them up to four conical openings on either side of the body as well as possible sensory structures. An anus may have been absent, and correspondingly the lateral openings probably served to expel water and waste material.

The authors give a reconstruction of what our ancient ancestor, named Saccorhytus coronaries, may have looked like. 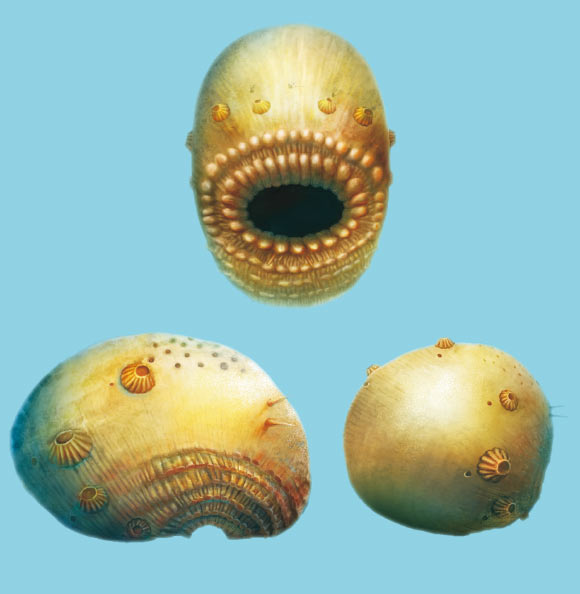 This article provides a summary of what the paper says and quotes some of the lead authors.

“To the naked eye, the fossils we studied look like tiny black grains, but under the microscope the level of detail is jaw-dropping. All deuterostomes had a common ancestor, and we think that is what we are looking at here,” said lead co-author Prof. Simon Conway Morris, from the University of Cambridge.

“Our team has notched up some important discoveries in the past, including the earliest fish and a remarkable variety of other early deuterostomes,” added lead co-author Dr. Degan Shu, from Northwest University.

“Saccorhytus coronaries now gives us remarkable insights into the very first stages of the evolution of a group that led to the fish, and ultimately, to us.”

Most other early deuterostome groups are from about 510 to 520 millio s n years ago, when they had already begun to diversify into not just the vertebrates, but the sea quirts, echinoderms and hemichordates.

So that is what our common ancestor may have looked like. Pretty attractive, don’t you think?