This question came to my mind in the most recent case where Donald Trump, trying to make the case that the media and the debates are rigged against him, said that tonight’s moderator NBC news anchor Lester Holt was a Democrat though in fact he is a registered Republican. When Trump’s manager Kellyanne Conway was asked why Trump lied about this, she replied, that Trump didn’t lie because “a lie would mean that he knew the man’s party registration” when in fact he didn’t know.

This raises an interesting point. To be called a liar is a very serious charge. It is even one of the prohibitions in the Ten Commandments. According to Conway’s definition, lying has to have contrary knowledge as a precondition. But even accepting her premise, it is not clear why she thinks that exempts Trump from censure.

To make a mistake can be excused, if the mistake is acknowledged and apologized for when pointed out. But what about the people who consistently say things that serve their needs and advance their agendas without caring if they are true or not, and not making even the most cursory attempts to find out? Why is that considered, as Conway seems to think, not as bad as lying?

The reason that we value people telling the truth is not because that make them virtuous but because then we can trust what they say. Someone who is consistently unconcerned about the truth and willing to say anything to manipulate others and advance their own interests, is a sociopath and as untrustworthy as someone who is a liar.

We can create three categories of people: those who care about whether they are telling the truth, those who are known to be willing to lie if it serves their interests, and those who do not care and randomly say things that may be true or false. Nobody falls exclusively into a single of those categories. We are all admixtures of all three, though we would hope that the first would predominate. Politicians tend to have larger admixtures of the second mixed in. But Trump is extraordinary in the extent to which the second and third seem to dominate.

And yet, it does not seem to matter to Trump’s supporters.

This Modern World by Tom Tomorrow says it all. 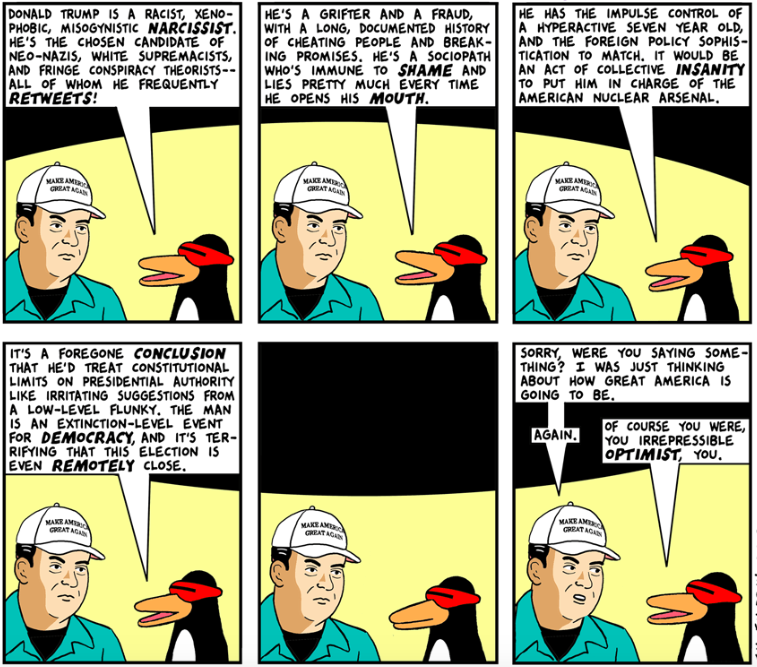