If you thought that the presidential race in the US was ugly, you should see the race for mayor of London that will be voted on May 5. Robert Mackey brings us up-to-date on the campaign pitting the Labour Party candidate and human rights lawyer Sadiq Kahn and the Conservative Party’s Zac Goldsmith.

Stop me if you’ve heard this one: an outsider politician who owes his station in life to the hundreds of millions he inherited from his father is running a failing campaign for office based on stoking fear of Muslims.

The word “failing” — as in 20 points down in the polls days before the election — is a clue that we are speaking about someone other than Donald Trump.

In this case, the politician’s name is Zac Goldsmith, and he is the millionaire scion of a prominent British family. He was thought of, until recently, as a mild-mannered Conservative member of Parliament, known mainly for his environmentalism and his sister’s friendship with the late Princess Diana.

For the past two months, however, he has generated waves of disgust and, polls suggest, not much sympathy, by pursuing a mayoral campaign filled with racially divisive innuendo about the supposed danger of electing his Labour Party rival, Sadiq Khan, a son of Pakistani Muslim immigrants.

Goldsmith’s campaign has tried to insinuate that Khan, the son of Pakistani immigrants and currently a member of parliament and whose father was a London bus driver, would fail to defend London from Islamic terrorists. Mackey provides example after example, including some that backfired quite hilariously, of the divisive campaign waged by Goldsmith. 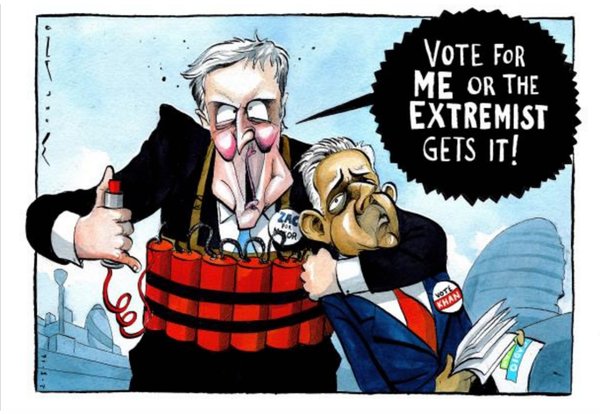