One of the features of the Affordable Care Act (aka Obamacare) was the Medicaid Expansion provision that enabled those people who were too poor to qualify for the tax subsidies of the main plan but not poor enough to qualify for the standard Medicaid to be able to get access to health care. However the US Supreme Court ruled that while Obamacare was constitutional, states could choose not to accept the Medicaid provision and many Republican controlled states refused to do so because of their ideological opposition to Obamacare, even though it was almost cost-free for them, since the federal government would pay the entire cost for the first few years and almost the entire cost subsequently. Thus the poor in their states were sacrificed because of the Republicans’ hatred for anything associated with Obamacare.

This map from the Kaiser Family Foundation gives the current situation. 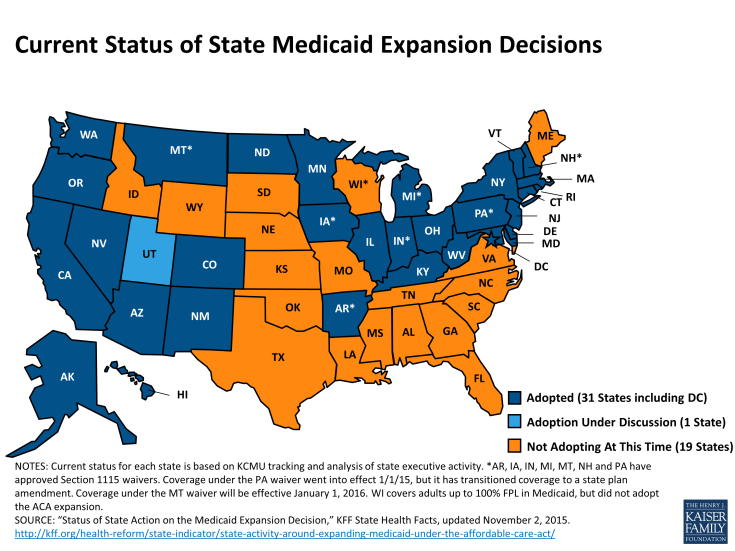 Now some of the rejectionist states are kicking themselves because they have to bear the burden of providing health services and are looking enviously at other states that are getting the money. Robert Bentley, governor of one of the most rock-ribbed Republican states Alabama, says that he too is considering accepting the program.

“We are looking at that. We have not made a final decision on that yet, exactly how that would work,” Bentley said Thursday in response to an audience question about expansion after a speech at a legal conference.

The move, if successful, would bring Medicaid expansion to the center of the Republican-dominated Deep South, a region that has previously been a swath of resistance.

Judy Solomon of the Center on Budget and Policy Priorities, which advocates for low-income people, said she believes governors are pragmatic and want their states to get federal dollars that are now flowing to other states.

Meanwhile Tierney Sneed writes that the popularity of the Medicaid expansion in those states that have accepted it is complicating matters for the party ideologues who call for a complete repeal of the entire Obamacare package because even some Republican congresspersons are seeking to exempt the Medicaid expansion from the repeal.

Senate Republicans are finally having their long-awaited “come to Jesus” moment on Obamacare.

After years of promising to repeal the President’s crowning health care achievement, even doomed efforts that are essentially political shows are being thrown in to turmoil by the political and policy realities that surround the law. Republicans took over Senate nearly a year ago, and now their first meaningful attempt to get a repeal measure on Obama’s desk is being thwarted by the desire of some Republicans to protect the law’s expanded Medicaid program — a major target of conservative scorn.

The resistance of at least a handful of Republicans to a repeal measure that would dismantle the expansion reflects a growing realization — even in red states — that Obamacare is here to stay and attacking one of its most popular provisions is politically damaging. No longer are Republicans just coming up short when it comes to how to replace Obamacare. Some are now openly admitting that fully repealing it isn’t really feasible.

But hell hath no fury like that of a Tea Partier scorned and those Republicans who cave on complete repeal had better brace themselves for an earful of anger.

In India, cows are not the only things that are sacred » « The war on Christmas gets crazier every year