We now have the story behind this infamous photo. 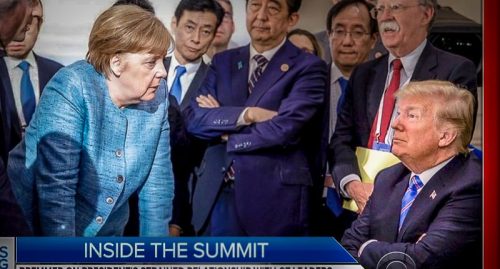 “It was at this point, towards the end of the summit, that Chancellor Merkel of Germany and Prime Minister Trudeau of Canada got together with some of the allies and really wanted to press Trump directly to sign the communiqué, that talked about the commitment to a rules-based international order. Trump was sitting there with his arms crossed, clearly not liking the fact that they were ganging up on him. He eventually agreed and said OK he’ll sign it. And at that point, he stood up, put his hand in his pocket, his suit jacket pocket, and he took two Starburst candies out, threw them on the table and said to Merkel, ‘Here, Angela. Don’t say I never give you anything,’” Bremmer described to CBS.

You know, right now Angela Merkel has a stronger claim to being “leader of the free world” than does the American president, and it’s annoying how little respect she gets.

This isn’t the first time Merkel, who has been chancellor since 2005, has had strange encounters with her male counterparts. In 2008, Italy’s former Prime Minister Silvio Berlusconi once tried to play hide and seek with the chancellor, and in 2009 he kept her waiting for a meeting while he chatted on the phone. In 2007, Russian President Vladimir Putin famously brought a dog to a meeting with Merkel, who is known to be afraid of dogs. And former President George W. Bush surprised Merkel by giving her a shoulder rub in 2006.

She’s not progressive enough for me, so this isn’t an endorsement, but still…she’s so much better than Trump. And Berlusconi and Putin and Bush.

Oh, and Trump paid a visit to Minnesota yesterday. Duluth is way over on the other side of the state, though, so I didn’t go (yeah, that’s the only reason). He lied about a bunch of stuff, promised to win Minnesota in 2020, praised that great guy, Kim Jong Un, and praised himself.

“Our people are the smartest and hardest working. You ever notice they call the other side the elite? I have a much better apartment than they do. I’m smarter than they are. I’m richer than they are. I became president and they didn’t and I’m representing the most lovely and best people on earth — the deplorables. You remember that?”

Hate the elites…and by the way, I’m more elite than they are.

As a dog returns to his vomit, so a fool repeats his folly » « Dennis Markuze is back online