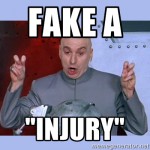 Uh-oh. I’ve disappointed David Klinghoffer. I should probably put that on my CV.

You see, the other day he praised a fellow named Tom Gilson for a post in which he provided a succinct summary of Intelligent Design creationism, and I took that summary apart, point by point. You might think, perhaps Klinghoffer finds fault with my analysis? He doesn’t provide any rebuttals. Did I get something wrong in using Gilson’s definition of ID? Nope, he doesn’t say…that would be hard to do anyway, since Klinghoffer praised it as exactly accurate!, exclamation point and all. Even in his title he declares that Tom Gilson Nails It.

So what’s his complaint? That I corrected the wrong person.

Gilson’s main point was that Darwinists predictably go after straw-man versions of ID — “God of the gaps,” aka “Goddidit,” etc. I would add that another, related habit they have is to avoid grappling directly with ID’s main theorists.

With that in mind, here’s a post by atheist biologist PZ Myers. It’s snide as always, and that’s fine. It’s his schtick. There is the expected accompanying image macro, this one with a picture of Mike Myers/Dr. Evil with a humorous caption. Dr. Myers comments on my post thanking Mr. Gilson for his thumbnail sketch of what Dr. Meyer said about, among other things, the massive challenge of protein evolution that relies on unguided natural processes alone. In his article, Gilson refers to a post by Meyer sharply taking issue on that with Richard Dawkins, who took issue with Dr. Meyer on the same question (“Dawkins’s Dilemma: Misrepresent the Mechanism…or Face the Math”).

Why would this be? Instead of arguing with these figures in the world of ID science and scholarship, he argues with Tom Gilson’s paragraph.

I didn’t talk about Gilson, or Meyer, or Nelson, or Lönnig, or anyone — I went straight to the argument, the short summary that Klinghoffer himself announced as exactly accurate! It was brief and pithy and had three clear, manageable points, and of course, was exactly accurate!, so it was a useful angle to address ID creationism’s claims in a way that they wouldn’t be later able to backtrack and claim I was inventing a straw man — which is what Klinghoffer said us evolutionists were always doing in his post. Wouldn’t you know it, he’d find a way run away from a statement that Nails It! and was exactly accurate! by disavowing the author. Gilson is not part of the world of ID science and scholarship, despite being able to define its core principles in a way that earns accolades from the Discovery Institute’s propaganda organ, and despite publishing books critical of atheism and atheists. When someone criticizes his formulation, though, suddenly he’s not good enough, and they’re just going after the easy, little guy because they’re afraid to go after the Big Guys of ID.

This, of course, is nonsense. I went after the definition, which Klinghoffer had already accepted. I don’t see Meyer as any better scholar than Gilson; I’ve read Meyer’s books, which are damnably awful, but I haven’t read any of Gilson’s, so he wins by default. And the thing is, I’ve gone after Meyer several times. I read Meyer’s Signature in the Cell. short version of my opinion:

It’s a bloated paperweight, full of self-indulgent preening by Meyer, and without a single novel idea in it — it’s simply the most unmemorable, uninteresting pile of schlock the DI has turned out yet.

Meyer is going to drool out a few hundred pages of drivel that will only convince the gullible, the ignorant, and the already dedicated creationists. There is not one bit of substance in the book so far; just rehashed Intelligent Design creationist talking points. This “specified information” of which he speaks is undefined and unmeasurable — it’s the phrase they flap at anyone who challenges their claim of have concrete evidence against evolution.

So everything in his reply was false, and he failed to address one single point in my criticism of ID. I think I know who’s running away from substance here.

But then, this is what Klinghoffer always does. The people who critize ID are chastised, not for their arguments, but because they aren’t paying the proper respect to the Bigwigs of ID. All those other creationists are easy punching bags we pick on because we’re scared of pompous wanker Stephen Meyer. And when we do address his phony heroes directly, sudden silence.

But then, that’s Klinghoffer’s schtick.

If there’s something weird and it don’t look good…who you gonna call? » « A new hope?