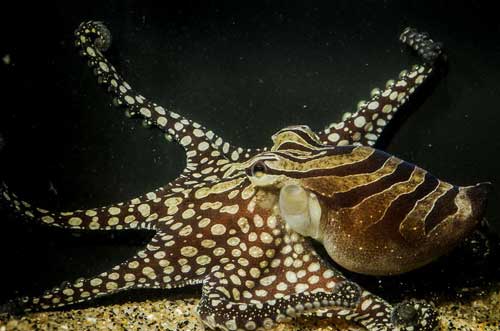 Panamanian biologist Aradio Rodaniche first reported the Pacific striped octopus in 1991 off the coast of Nicaragua, noting its strange behavior—living in groups of possibly up to 40, laying multiple egg clutches, and mating face-to-face and sucker-to-sucker. Most other octopus species, for instance, come together only to mate.

Next thing you know, they’re making spears, forming hunting parties, warring with one another. And then they develop city-states, philosophy, diplomacy, and politics, and all the horrible appurtenances thereof: assassins, lobbyists, and televangelists. Then they take over.

It’s all because of that face-to-face mating. Hey, that’s our thing! They’re copying our specialty! Only they’re making it scarier.

"Regular octopus mating, where the male is behind and on top of the [female]—or far away—that’s scary enough to watch," said Ross. Females of many species, for instance, will sometimes kill and eat their mate, even if they are mating from a distance.

But "watching these guys come and interact with their beaks—wrapped up in a ball of limbs—are they fighting or mating?" he recalled wondering.