This picture is all over the place, so I don’t have the original source to credit, but it’s still wonderful. At the Global Atheist Convention 2012, we were picketed briefly by an angry mob of Muslims who wanted us all to go to Hell, the sooner the better. So in response, two gay men… 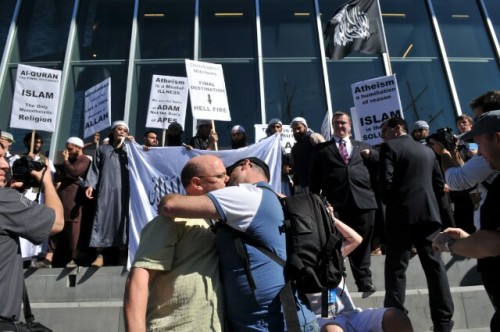 Love vs. Hate, Tolerance vs. Intolerance. That’s what it’s all about. I’m glad I’m on the right side.

(Whoever took that photo, let me know and I’ll update this. I met the two subjects of the picture too — very nice guys, but I didn’t get your names. Fill me in!)

Got the info: that’s Gregory Storer and Michael Barnett.

Autism blog poll » « Now you, too, can be a cephalopedant