I really have a hard time wrapping my mind around the strategies of anti-choice activists. I’ve encountered a few, and I’ve browsed some of their websites, and am so unimpressed with their tactics…but they seem to work effectively with some people.

We’re all familiar with their favorite choice of signage: preferably something with lots of blood splatters and body parts. This is quite blatantly an attempt to inspire aversion to what goes on beneath our skin, and encourage people to ignore the messiness of reality. It’s ugly but it works, to a degree (it also leads to desensitization; I notice that those sign-waving picketers aren’t prostrate with grief, as you’d expect if they were really feeling the message of their signs).

Their message could be whipped around and applied directly to, for instance, surgeons and oncologists. They also do bloody messy things, and they lop off parts and scar living, adult people. Shall we demand an end to surgery?

And then there’s the Big Lie. I have yet to meet a single anti-choice advocate with a shred of honesty and principle; the ones I’ve talked to are even more nauseating than creationists. They have a party line, and they stick to it…reason doesn’t even exist for these people, just blind, fawning adoration of babies, which they imagine to be sleeping inside the blood and meat of a living woman. So they say things like this without a stirring of conscience: 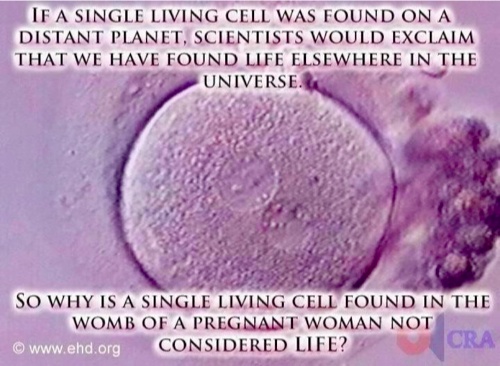 That’s just bizarre. What biologist has ever claimed that an oocyte was not alive? Of course it’s alive: sperm and egg are perfectly healthy, normal living haploid cells, the fertilized egg is a living cell, the immature oogonia and spermatogonia in the gonad are living cells, the primordial germ cells in the developing gonad are alive.

The argument is never about whether some state is alive or not. Your appendix and tonsils are great masses of living cells, but if the organ becomes inflamed, doctors will cut them out and throw them away. Every time you poop, about a third of that mass that you excrete and flush away consists of living bacterial cells, yet no one hesitates and feels regret at the tragic loss of life when their hand is on the handle.

The argument is about whether that living thing is a person requiring extensive legal and moral protection, and it’s entirely clear that “life” is not a sufficient criterion, or people would be lobbying for the protection of turds and tonsils. We are not absolutists about protecting all life; we can’t be.

Even the anti-choicers know that. That’s why, if you look at the awful site that image came from, you discover their other argument: it’s a baby. It’s got fingers and toes and a face and its heart beats. This is a purely emotional argument, trying to compel you to empathize with something on the most superficial grounds. This is the motivation behind all those intrusive ultrasound laws — you are supposed to surrender reason and decide that because something has a face and hands and heartbeat, it is exactly the same as a teenage girl who wants to go to college, or the young woman who discovers her much-hoped-for pregnancy has gone awry and the fetus is lethally deformed. It’s demeaning to real human beings.

But here, here’s a living creature with a face and hands and a heartbeat. 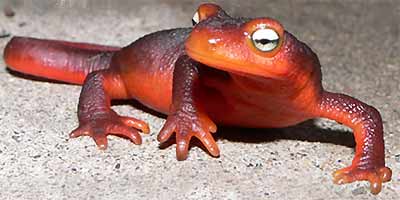 It’s even got far more autonomy and functionality than a twelve-week fetus, and is adorably cute. Shall we also declare that women and newts are morally, socially, and legally equivalent? It seems to be the way we’re going.

Obama is a secularist just like he’s a socialist » « Episode CCCXIV: Dust that comments