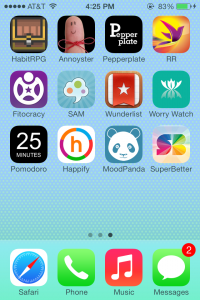 Buying cheap or free apps for my smartphone.

It took some work, and plenty of the apps were used for a few days or a week and then discarded as unhelpful or useless, but at a grand total of 99c spent across six or seven apps to find two gems (Self-Help Anxiety Management and Recovery Record) that massively improved my quality of life? Well worth it.

Sometimes the apps were mental illness specific, for anxiety or meal-tracking. But I also use Annoyster to send me random alarm reminders, (“Therapy is helpful and worth going to,” reads my most recent one. “Eating mindfully is a new habit I’m developing.” and “Have you had a glass of water recently?” have been previous alarms.) Fitocracy* to gamify exercising without obsessing over calories burned, and PepperPlate to make menus for the week.

Fidget rings and other fidget objects

Having something to play with or occupy your hands in conversation can help with dermatillomania, trichtillomania, nail biting, and a host of other nervous/anxious habits. Fidget/spinner rings are especially nice for professional situations–where you can’t pull out buckyballs or rubberbands, etc. A friend and I bought gorgeous, matching ones, and I’ve toyed with mine during interviews, therapy, and particularly boring lectures. Almost immediately after purchasing, I ended up with long enough fingernails to paint–I wasn’t biting or tearing at my nail beds constantly.

Even if you’re not the anxious type, I recommend them as a way to get respite in a conversation or interaction. More socially acceptable than looking at your phone, they give me something to focus on when I need a few seconds of space or distance. Here are some on Etsy, and cheaper variants on Amazon.

Though I haven’t used it personally, some friends use what I know as massage putty, but I’m sure the expensive stuff could be replaced with some cheap, dollar store putty. Build hand strength, make weird shapes, copy newsprint.  Rubik’s cubes are favorites of my friends, though I’ve never picked up the appeal.

Books can add up in cost more than a phone app, but honestly, if a single book is cheaper in time and money than therapy….it’s well worth it. Though I’ve had access to free therapy for years now, books have been where I developed coping strategies, learned to recognize failure-mode patterns of thinking, and have me the words to explain what was going wrong in my head. And these haven’t been highly technical books–I’d just wander into the psychology section of a bookstore and find the ones that seemed to be less about spirituality and bad tropes and more about science, particularly ones that talked about coping strategies, evidence-based therapy, or didn’t rail against medication on the back cover.

Finding people with other mental illnesses.

I actually don’t seek out people with eating disorders–it can put a real strain on me if we’re not at similar levels of recovery. But spending time around people who are used to having bad brain days that make socializing hard has taken a lot of the pressure of social interactions. I wasn’t trying to hide my coping mechanisms, and I got praise and reward for little victories (I ate a snack! I decided not to go to the gym today and felt good about it!) that wouldn’t mean much to a neurotypical observer.

*For over a year, I’ve encouraged friends and, well, strangers on the internet to use Fitocracy for their non-shamey system. Recently, the emails from the site have been all about weight loss and fat burning. I’ve solved this by disabling all emails, but the trend from site-for-people-who-want-to-feel-good-about-exercise to site-for-people-with-also-some-guilt is annoying.