As many of you are aware, this year I attended the Imagine No Religion 2 conference in Kamloops, BC. What you may not have been aware of is the fact that this was my first ever atheist conference. I’ve only been ‘out’ for a couple of years, and because nearly all of the atheist meetups I’ve ever seen are in the eastern United States, I haven’t really had much motivation to go. While it would be cool to meet some new athie folk, the fact is that I can think of quite a number of things I’d rather spend $1200 on.

This year, however, I was asked by members of CFI Vancouver and Okanogan to attend the function in Kamloops. At the time they asked, they were concerned about not being able to recoup their expenses. Seeing as I owe a great deal of my public profile to the hard work done by my fellow CFIers, and that I genuinely like them and am happy to help out when I can, I decided to pop my conference cherry and attend INR2. Overall, I am incredibly glad that I did. Not only was it a wonderful chance for me to hang out with a group of (largely) like-minded people and have fun for a weekend, but I also got a chance to meet some folks that I’ve been looking forward to crossing paths with for some time.

I arrived in the mid-afternoon on Friday the 18th, having driven up with fellow Vancouver skeptics Fred Bremmer, Pat O’Brien, and David Gordon. It was, incidentally, about halfway into the drive before I noticed that I had left my laptop at home. Stupid me. No sooner had we walked in the front door when we were greeted by Atheist Experience host and fellow FTBorg Matt Dillahunty. We took a liking to each other immediately: 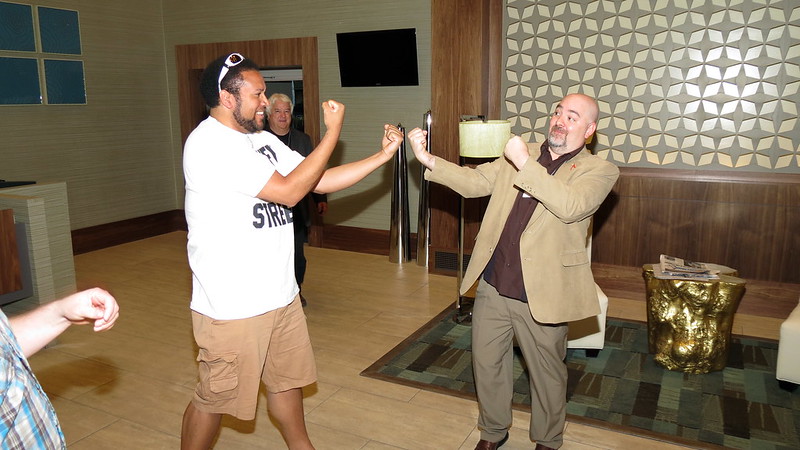 We also quickly ran into PZ Myers, blogfather extraordinaire. This was amy second time meeting PZ in person. I don’t know where this ‘teddy bear’ meme comes from – PZ is as cuttingly witty and charmingly sarcastic in person as he is in type. At any rate, our cup quickly filled to overflowing with FTBorg as Natalie Reed was to join us shortly for food and drinks at the On The Rocks Pub just across the street from the conference. Following that was the opening event for the night: a debate on whether or not a god or gods can be said to exist. 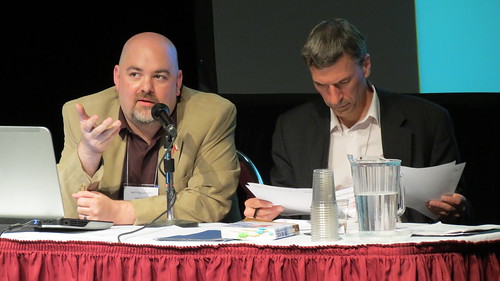 At the risk of sounding like a total wet blanket, I am incredibly bored by “god” debates. The atheist side can usually be summed up by the phrase “burden of proof” (maybe with the phrase ‘she-bears’ or ‘eternal torment’ thrown in for panache), while the theist side almost always rests on “big numbers, bad physics, and logical fallacies, therefore Jesus!” Ho hum. As much as I enjoyed watching Matt and Chris (DiCarlo) bash the theist side around*, it was a combination of depressing and infuriating to hear the same tired arguments (Kalaam, fine tuning, prove that there isn’t a Sasquatch, ‘objective morality’) presented as though they were either sound or compelling. It was likely a waste of Matt and Chris’ time. It was certainly a waste of my time.

The high point of the atheistic side, as far as I was concerned, came when Chris (finally) pointed out that the question of ‘is god?’ is a whole lot less important than the question of ‘how is god?’ What use is attempting to demonstrate that something exists when no attempt has been made to define what it is like and how it interacts with the world? Of course the theists attempted to side-step and say that they were only there for the ‘is god?’ question, and I wish the conversation stayed there but, in true apologist style, there were so many logical fallacies thrown around that it was all Matt and Chris could do to clean up all the fetid piles of shitty argument that Theists #1 and #2 left lying around the stage.

I also really like Matt’s courtroom comparison, because it is a relatable and (I think) compellingly persuasive simile. Basically, his contention is that just as “innocent” is fundamentally different from the concept of “not guilty” – one speaks to culpability while the other speaks to the presentation of sufficient evidence – it is silly to require that the possibility of the existence of gods be disproven. Matt buttons this argument with the brilliant summation: “I am here to argue that the gods are ‘not guilty’ of existing”. Once again, the theists ignored this point and instead tried to argue that the burden of proof was on the strawman atheist argument they kept propping up.

After the debate there was a general reception, where I got a chance to meet a handful of people who recognized my name from the blog, which was a pretty cool experience for me. As I’ve maintained from the very beginning, I write almost entirely for myself, so learning that other people like reading my stuff is a huge bonus for me. 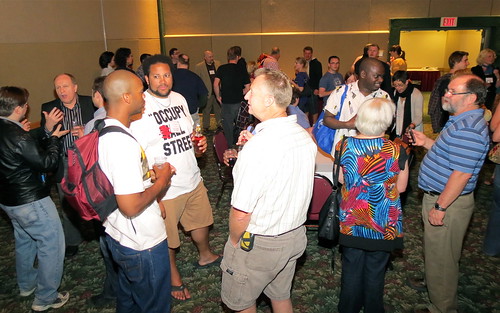 Photo credit: Fred Bremmer. Special bonus: all of the black guys at the conference are in this picture

I was invited to participate in an early-morning panel about ‘alternative medicine’ – a propaganda phrase that I put in scare quotes because it is sheer nonsense. My role, as I saw it, was to play comedic foil to the far more knowledgable Dr. Ian Mitchell. He talked about the importance of scientific rigour and careful testing when it came to evaluating medical claims, and I made crude (yet effective) jokes about smoking weed. All in all, it seemed successful (except afterward when someone came and asked if I knew where ze could score some pot – I don’t smoke anymore).

There are some people you meet who you just totally ‘click’ with immediately. Without any need for profound explanations why, you just seem to ‘vibe’ with that person in a really positive and fun way. That’s how I felt when I met the other panel participant (and moderator), Skeptically Speaking host Desiree Schell. Within 5 minutes of meeting each other, we were getting along like a house on fire. That afternoon, she gave an absolute barn-burner of a presentation on social movements and activism that was basically spoken directly into the pleasure centres of my brain.

When my easy friendship with Desiree collided with my similarly-kismet kinship with Edwin Hodge, we ended up having a really interesting and stimulating evening together, which was capped off with drinks by the pool with a bunch of the conference-goers outside the hotel room.

I have a lot more to say, but I’m up against my word limit so I’ll cap it off here. More summary and more pictures to come.

*I never bothered or cared to learn the names of the profoundly dishonest and insultingly ill-prepared god-heads who presented the theist side.