Since I began scrutinizing race and race issues closely, I’ve found myself returning repeatedly to my (admittedly cursory) knowledge of psychology. I have found the concepts that are described in the scientific literature to be incredibly apt in discussions of racism. Additionally, the often creative study designs used by psychological researchers are readily adaptable in the service of scrutinizing our inherent racial biases and heuristics. They allow us to control for, and reveal, cognitive processes that happen well below the level of our conscious awareness. While regulations against discriminatory hiring practices or forced integration of schools might be sufficient to address overt and obvious racism, the gaps we continue to see along racial lines in employment and education strongly suggest that these measures are insufficient. We must look deeper – to the root causes of racism.

I lay the blame firmly at the feet of our stupid mammal brains. We forge unwarranted connections between variables, weaving false causation from whole cloth. When we see women kept out of the boardrooms, for example, despite the line in our Human Resources policy manual that specifically says we won’t do that, our brains helpfully fill in the blanks for us – obviously women aren’t there because women aren’t supposed to be. I mean, once you remove the most obvious barrier, that’s the same as fixing things, right? If those lazy broads can’t even figure out how to walk in the door we so magnanimously opened for them, we can shift the blame right back to them, can’t we?

Of course we are starting to recognize that this isn’t true, and that these kinds of attitudes lurk well below the surface. This, unfortunately, means that we need to devise increasingly-sophisticated tools to find them. One group of researchers at Tufts University appear to be up to the task:

What you wear can influence what race others perceive you to be, a new study finds. Scientists dressed people in either smart business attire or work overalls and asked onlookers to categorise the faces as white or black. Faces were more likely to be seen as white when dressed smartly and black when in overalls, the researchers found.

A word of caution when interpreting these studies: it is generally not a good idea to extrapolate the experience of white, American university students (who are overwhelmingly the test subjects of studies like these) to the entire population, but these kinds of studies can give us a nod in the direction of where we should be looking.

In this study, participants were asked to evaluate the race of a group of cartoon faces. These faces were drawn on a gradient from light to dark, and were attired either in a suit or a jumpsuit suggestive of a janitorial uniform. 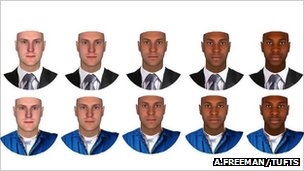 To me, those look more like doctor’s scrubs but whatever. Not the point. One of the sets is dressed like a businessman, the other is not. Participants were then asked to categorize a series of faces flashed on the screen as either ‘white’ or ‘black’. This dichotomization, while reductive, is necessary to test the main research question – does attire affect how we categorize people by race? The trajectory of their hands was also monitored to see if there was a ‘gut feeling’ categorization which was quickly ‘corrected for’ as more conscious thinking set in. If participants were, for example, seeing a face in a suit and tending toward ‘white’, but then correcting once they noticed skin colour, the researchers were able to observe that.

As we can see from the graph, the more ‘ambiguous’ the face was, the more likely it was that the one wearing the suit was classified as ‘white’, compared to the jumpsuit. We can also see that ambiguity affected the number of ‘incongruous’ cases, which is to say the number of times the hand was instinctively drawn one way vs. the other. This difference is not monumentally large, only 6% overall, but it does highlight an important effect: our racial evaluations incorporate more than simple phenotype – they include a class element as well.

Of course, every black person who’s ever been told that they “talk white” or are “the whitest black person I know” has experienced this effect first-hand. I have had this bizarrely thoughtless phrase thrown at me more than once. I say ‘thoughtless’ because the speaker clearly hasn’t evaluated the implications of that statement. If speaking proper English and wearing a suit is a “white” thing, then what is an appropriate behaviour for black people? Given that we evaluate a person’s employability and intelligence using these class markers, doesn’t that strongly suggest that the speaker holds a bias against non-white people? What about uneducated and poor whites – are guys like Hank Williams Jr. supposed to start ‘acting white’ too?

Of course the truth is that the phrase ‘acting white’ is simply an articulation of the fact that we subconsciously associate certain traits (in this case, positive ones about class) to some racial groups (in this case, white people) more so than to others. What would be fascinating to look into is whether or not these kinds of associations hold for people of east Asian heritage, or people from the Middle East. We could even use this kind of design to measure how changes in media portrayal shape these subconscious attitudes (by showing them a news item with different racial biases before making these kinds of measurements), or whether a cohort effect exists between older and younger people. More importantly, we could test to see what kinds of things reduce this effect – does being made aware of the bias make you less likely to commit errors?

We have become enthralled with the idea that racism is a malicious, intentional character flaw held by evil people. It’s far easier to deal with this fiction, because it allows us to absolve ourselves from any responsibility. We would certainly never be racist, because we’re not bad people. This research shows that simple disavowal of this kind of bias, under the banner of “I don’t see race”, is simply insufficient to exorcise the demons of racial prejudice from our minds. Intentional, purposeful work is needed to identify and address our cognitive failures. Failing to do so will only perpetuate the kind of lazy thinking that got us here in the first place.