Before we get too far in, let’s sketch out a few hypotheses.

If you’re arguing that MythCon was a fluke, you’re arguing that the majority of people within the atheist/skeptic movement oppose giving problematic YouTube atheists/skeptics a platform. This would imply that people who opposed said YouTubers would be valued within the community, and you’d expect a net increase in their value on Patreon. If the majority of Patrons for these YouTubers were from the greater majority, you’d expect to see a drop in value as they took the stage and a net decrease in their Patreons. This is probably incorrect; as pointed out last time, the Patrons of someone likely agree with their views already. They are taking the stage, sometimes for the first time, and presenting their views to a fresh audience. Existing Patrons should see value in that and reward them, while we should also expect some new Patrons to arrive if they like what they see, also boosting the Patreon account’s bottom line.

Let’s start with the two people most associated with MythCon, Thomas Smith and Carl Benjamin. The latter’s Patreon cashes out on a monthly basis, while Thomas Smith’s is per episode of Serious Inquiries Only, so I’ve scaled Smith’s numbers by 8.7 to put them roughly on par. This isn’t strictly necessary, as we’re really looking at the spikes, their size relative to other spikes in that person’s Patreon, and when these spikes occur. 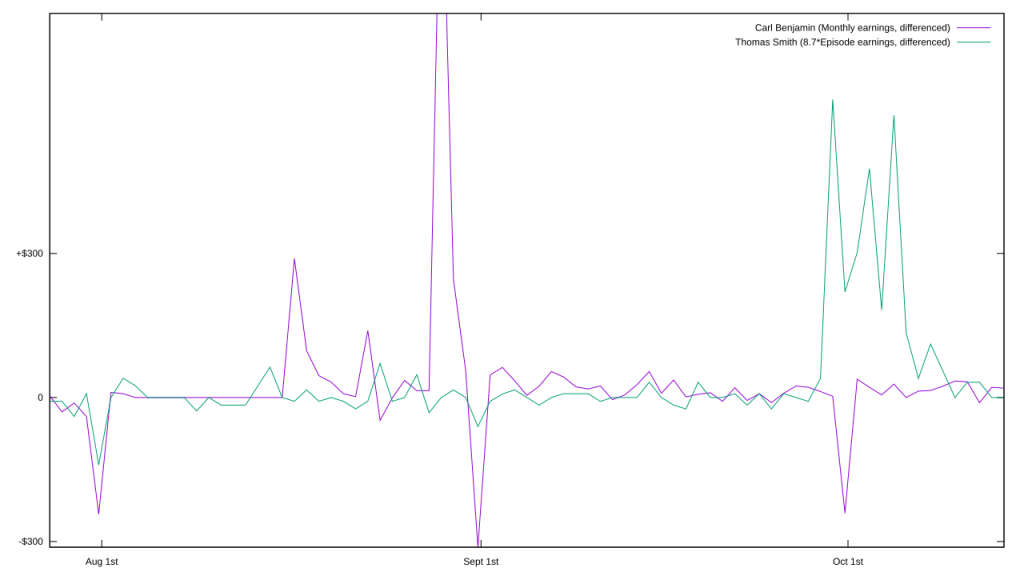 The flood of cash to Smith’s Patreon is a bit staggering, frankly, and it sustains itself for a while. The timing makes it pretty clear the reason is MythCon.

That flat line on Benjamin’s graph is a hole I have in my Patreon data, alas. He, at first, appears to have suffered a financial penalty for MythCon! If you look more carefully, though, there’s a periodic dip at the start of the month for both Patreon accounts; it looks like a fraction of people remove their funds before Patreon’s monthly cashout to their creators, then join back up a few days later, presumably to enjoy the perks of patronage without having to pony up. As luck would have it, MythCon fell on the end of the month, and as the dip isn’t much different from prior months it’s more accurate to say MythCon didn’t have much effect on Benjamin’s value.

But what does, then? I looked for what could have caused those the spikes on August 16th and 28th. The first appears to have been a momentous day for Benjamin: his YouTube videos were demonetized, costing him a major source of income, and he alerted his fans that three people have tried to get him booted from MythCon. The second was the day he was being sued for perjury and violating fair use by a progressive YouTuber.

This supports the idea that Benjamin’s primary value is as a “bigot hype man;” who makes bigotry appear more reasonable by taking on the trappings of confident authority, reassuring bigots that they are the reasonable ones and boosting their egos. The worst that could happen here is if he went full SJW, but the second is having his soothing words silenced. That threat also feeds into a persecution narrative that thinks of the masses as uneducated sheep, the educated as witch-hunters, and the bigots as brave heroes with an exclusive lock on “the truth.” Problem is, bigotry is by definition irrational: if you put a bigot hype man in a spot where their views are placed under scrutiny, this punctures the appearance of authority and assurance. In sum, threats of being silenced would draw in big bucks, but having your words challenged reduces your value. So why didn’t Benjamin suffer a major loss? I’m guessing it’s because Benjamin has a cottage industry of cheerleaders who spun the event as a net win for him, dampening the blow.

I can sense you’re skeptical, and that’s cool, so let’s bring in two more data-points: Carl Benjamin wasn’t the only YouTube atheist to be invited to MythCon, after all. Both Armoured Skeptic and Shoe0nHead got an invite, and both are also YouTube “skeptics” who spend a fair bit of time criticizing feminism. Both, in fact, were showing up on stage at an atheist/skeptic conference for the first time. If it was their insight into social justice that was valued, we’d expect their value to jump as they spread their ideas further than before; if they too are bigot hype people, their value comes from being able to justify bigotry while not being questioned. 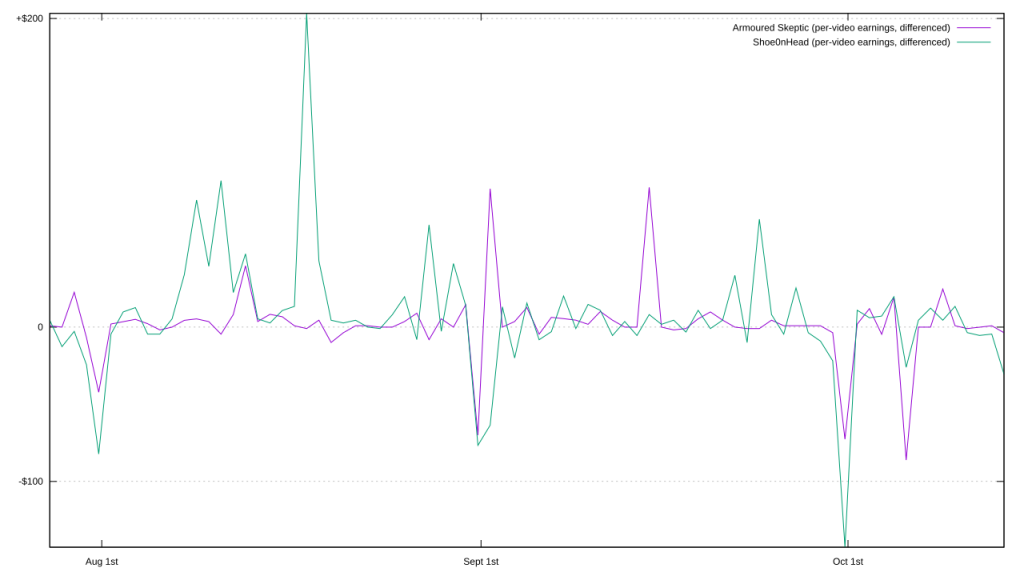 This time around, I can’t find anything specific behind the upticks. Armoured Skeptic’s best day came on September 14th, and the only noteworthy thing seems to be a mention in an article from Martin Hughes of Barrier Breaker. September 1st is the day after Dr. Kirsti Winters released a video criticising Armoured Skeptic; neither of those seem high-profile enough to be worth the bump. I can find even less for Shoe0nHead’s spikes. They do coincide with the time Carl Benjamin was making a lot of noise about being de-platformed, but if that was the cause you’d also expect an uptick in Armoured Skeptic’s value too, assuming he’s also a bigot hype person.

Shoe0nHead’s value did see an unusual drop after appearing on stage at MythCon, however. She fits the pattern of a bigot hype woman, while Armoured Skeptic does not. Having said that, the latter showed no boost in Patreon value after a public speaking event that was a major topic within the atheist/skeptic community, which suggests his Patrons didn’t place much value on him speaking there, he didn’t earn new Patrons from the event, or some combination of both. Neither theory explains him that well.

While we’re at it, there were more and harsher critics than Thomas Smith out there. Dr. Kristi Winters was likely the most vocal of the bunch, sending out periodic Tweets on the conference hashtag, writing blog posts about Carl Benjamin, and contacting the venue to point out who they were hosting. Steve Shives and Dan Arel also contacted the venue, and did enough activism to be explicitly called out by Benjamin, but they didn’t put in the same level of work. We should expect to see a pattern much like Thomas Smith’s for this trio, with their value increased post-MythCon as their warnings were borne out. 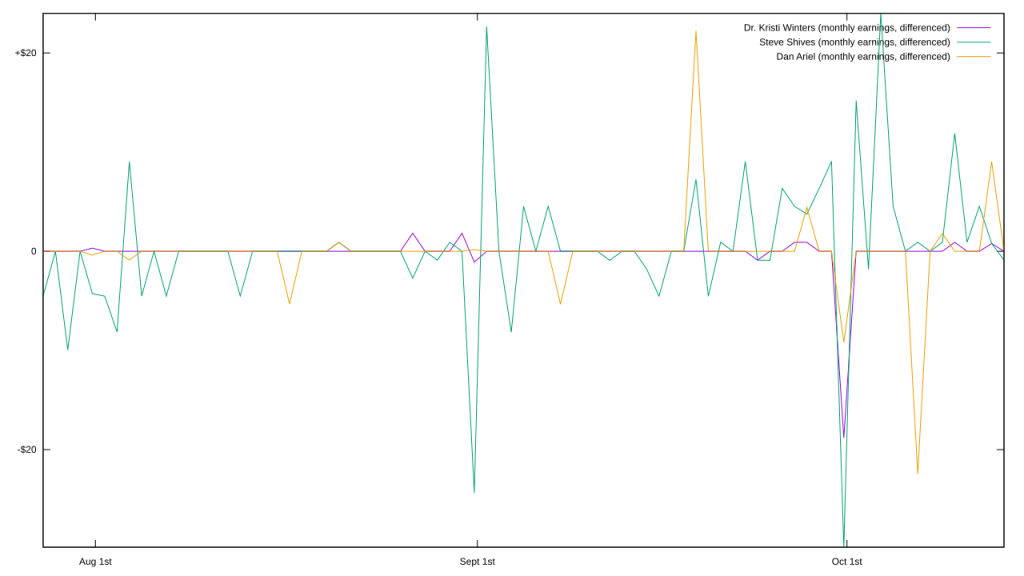 That isn’t the case. Steve Shives is probably the closest to the pattern, but his September 1st spike is about as big as his biggest post-Mythcon spike, and he sees gains in value weeks before MythCon took place. I can’t find anything notable in the second half of September to explain that gradual rise. Seth Andrews did fire off that Facebook post in that time period, but it doesn’t mention Shives by name and when Andrews did mention him on Twitter it wasn’t flattering. Ditto that September 1st spike; how did this video by Bearing translate into an increase in value, if it was the cause at all? That spike after MythCon is probably due to this video, which was widely shared, and not good vibes over his handling of MythCon.

Dan Arel’s biggest spike came at the time of Seth Andrew’s Facebook post, and unlike Shives he was explicitly mentioned, but after MythCon his value took a hit. Dr. Winters shows an even stronger loss pattern! This is bizarre; both Steve Shives and Dan Arel seem to gain value when other people criticism them, and gain in proportion to the critic’s follower count, yet Winters has faced chronic criticism from large-audience people like Benjamin with no gain in value. What could explain this?

I’ve got two theories. Remember the weird differences between Armoured Skeptic and Shoe0nHead? Both espouse roughly the same anti-feminist views, but they have differing genders. We see a similar gender-based pattern between Shives/Arel and Winters. Maybe what’s really happening here is an expression of unconscious gender bias. Women like Shoe0nHead and Dr. Winters who step into leadership roles are often penalized for doing so.

Penalties for women who violate gender-stereotypic prescriptions by being successful are apt to take the form of social censure and personally directed negativity. Research findings have indicated that women who behave in ways typically reserved for men are found to be less socially appealing than men who behave similarly or women who behave more in line with normative prescriptions (Bartol & Butterfield, 1976; Carli, 1990; Carli, LaFleur, & Loeber, 1995; Jago & Vroom, 1982; Rudman, 1998). These studies indicated that social penalties result when women have actually engaged in behavior that is distinctly counter to gender-normative prescriptions. We are suggesting that the mere recognition that a woman has achieved success on a traditionally male task produces inferences that she has engaged in counter-normative behavior and therefore causes similarly negative consequences.

We’re looking at relative differences here, and not absolute numbers, so we dodge around a lot of objections. Sure, you could argue that Dr. Winters or Shoe 0n Head have a lower value due to the quality of their voices, or how much effort they put into their Patreon accounts, or some other bullshit, but none of those dramatically changed between September 29th and October 3rd. The only major change was MythCon, so any explanation is anchored to that and not vague generalities. 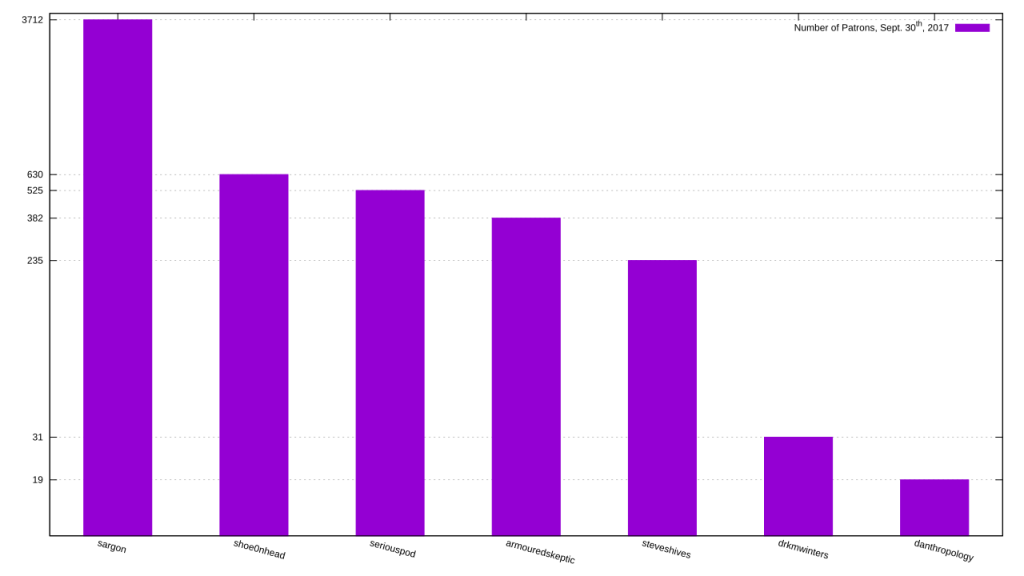 Dr. Winters’ “huge” loss was due to two people withdrawing their support, and Arel’s was due to a single person. Their low Patron count means they’re a lot more vulnerable to statistical flukes, which makes it a helluva tougher to draw any firm conclusions from their numbers. This theory doesn’t explain the gender pattern, as Shoe0nHead is the second-most popular of everyone mentioned so far (“seriouspod” is Thomas Smith), but it does undercut Dr. Winter’s numbers and thus questions whether this is a pattern at all. Maybe Shoe0nHead really is more of a bigot hype woman than Armoured Skeptic? Maybe there’s some other explanation I’m missing out on?

If you’re feeling a bit better, try to hold onto that glow until I get to part three. You’ll need it.

THIS IS NOT NORMAL » « Pardon the Interruption,