Let’s say someone who associates with you just committed a terrorist act, killing one person and injuring at least a dozen others. How do you react?

If you’re on 4chan’s /pol/ forum, your first thought is damage control and spin, with the hope that useful idiots will smooth things over by calling for “dialog” and “empathy.”

We need to create a positive outcome from the Charlottesville rally. Whether it be online or real life, we need to stand up and show that the MSM narrative is false. It’s the only way of getting normies back onto our side. At this point, the alt right is about to be labelled as a terrorist group. Then there will be no more rallies, no more movements. I say we stand up and post images of the girl who died, saying ‘rest in peace’. It’s the only way to appease the normies and get them thinking that the alt right isn’t some terror cell full of KKK members.

Don’t worry, the main counter-signal for Charlottesville is that the police broke the law and instead of separating the crowds started dispersing them and causing chaos as they forced the crowds into clashes. If the police just did their jobs and focused on keeping people separated then none of this would have happened.

Everytime. Times like these that separate the newfags from the oldfags.

Damage control is better than watching everything slip away.

Damage control can’t manifest in larping and yelling “false flag” though. If we are seen as a group that can’t see the wrong in a pointlessly killed WHITE woman, then we lose all credibility.

I agree. Screaming ‘false flag’ RN is stupid and no one actually believes it. It’s a reach. We’re better off having people commemorate her death, acting apologetic just for the PR

Disavowing Fields is probably the best we can do. If we get idiots calling him a hero straight out it’ll just turn normies away from the movement.
larpers seem to be what caused some of the issue going on. We need to quit Nazi and KKK symbolism. It’s outdated and it’s sure as hell not going to be able to be re-branded in a positive light.

If you’re on The Daily Stormer, one of the largest online gather places for neo-Nazis, you celebrate the death of someone you hate, and post memes mocking the victims of violence. 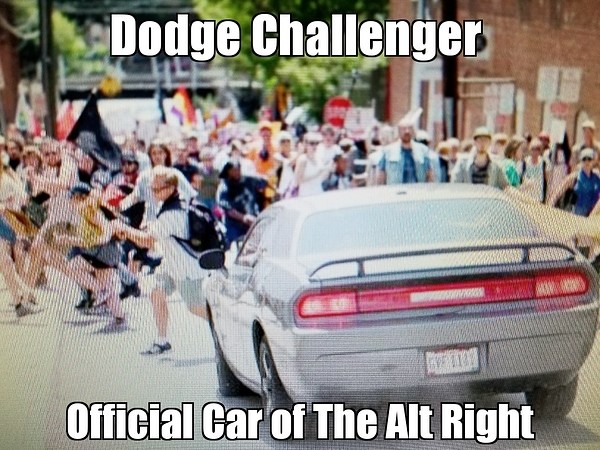 The remaining images aren’t safe for life, so click here if you’d like to see how low they go.

Meanwhile, decent human beings organized 682 rallies in support of the victims and shut down the web server for The Daily Stormer. Politicians who ordinarily would have been sympathetic have condemned the alt-right, and journalists keep using “alt-right” and “terrorism” in the same sentence. People are sharing around images of white supremacists and hunting down their information.

So, how should you react to this? My advice is to take a good, long look in the mirror and reconsider what you stand for. If you can no longer support white nationalism and edge-lords, state as much as clearly and loudly as you can. If you still can, find a rock to crawl under and hope no-one ever finds you.

Words Said and Unsaid » « The Neo-Nazi in Chief