Yesterday, got up at 6am and prepared for my busy day, went to one conference, then got on a plane for another one…with an itinerary that went from Minneapolis to Baltimore, then a 6½ layover in the dead of night, and then to Atlanta, and finally to Springfield. I did not sleep a wink the whole time. I attended a series of talks: a workshop on queering violence with Randall Jensen, which was a nice eye-opener. A talk by Nikki Jane on hip-hop as a tool for coping with mental illness. I learned about pre-apocalyptic party planning from Mika McKinnon, and that was a nice surprise. You don’t prepare for disaster by by getting a bunker and a big gun and 5 years worth of processed food, but by making social connections and building a more resilient community. And finally, Mandisa Thomas spent an hour being fierce and strong, as she does.

No sleep yet. I’m feeling it, though, boy am I feeling it. I’m too old for all-nighters. So, for dinner, I took a long hot shower to try and restore some humanity. It didn’t work, as you can see. 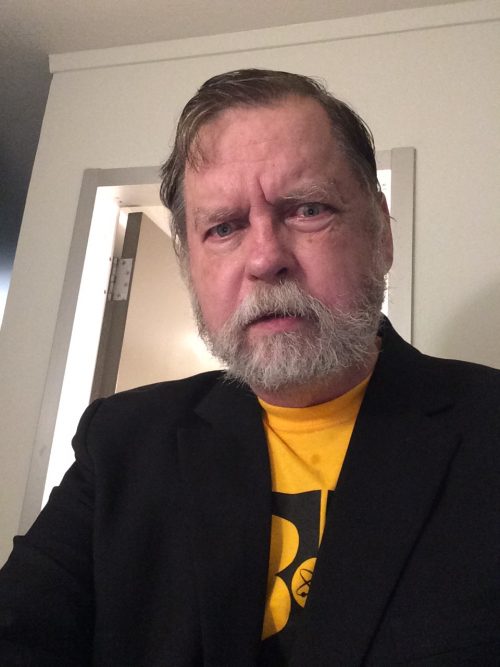 I look even more terrible than usual. Those aren’t eyes, they’re aching blobs of bloodshot gelatin, and all that lurks behind them is a howling void. I should collapse into a bed right now, because I’ve been 36 hours without sleep. But I’m not. Because obviously I’m a party zombie.

There are two more talks ahead of me. Samantha Montano is going to be talking about Disasterology, because somehow I think a theme of this year’s meeting is coping with catastrophe. It would be useful, except that as the old decrepit guy, I know what my role would be. I’d be the grey-haired crusty cynic dispensing advice who eventually gets eaten by zombies to the relief of the stalwart band of survivors, who were just to noble to admit the he was slowing the whole group down.

Then Leighann Lord is going to invigorate me with an hour of comedy, so I might have the energy to drag myself to the Skeptiprom, where I will have one drink, and only one drink, which will make me fall over in an unconscious stupor.

Instructions to kindly skepticonners: I’ll have my room key in my front left pants pocket. I’d appreciate it if you’d carry my unconscious form to my room, and drop me on the floor or, if you’re especially nice, on my bed. Don’t worry about the usual defenses against choking on my own vomit, because I won’t be drunk, just exhausted.