Ask me to name the graph that annoys me the most, and I’ll point to this one. 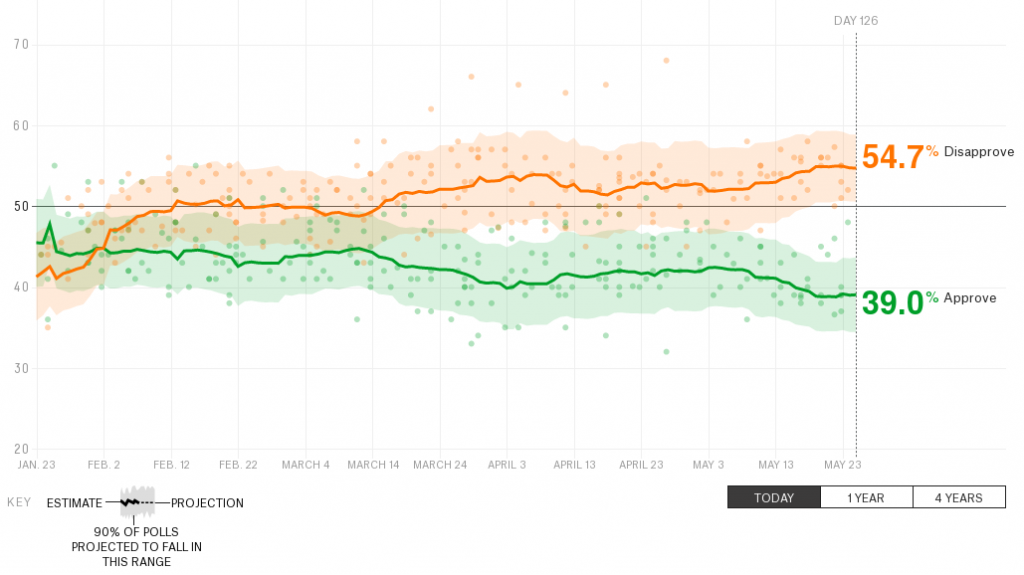 Yes, Trump entered his presidency as the least liked in modern history, but he’s repeatedly interfered with Russian-related investigations and admitted he did it to save his butt. That’s a Watergate-level scandal, yet his approval numbers have barely changed. He’s also pushed a much-hated healthcare reform bill, been defeated multiple times in court, tried to inch away from his wall pledge, and in general repeatedly angered his base. His approval ratings should be negative by now, but because the US is so polarized many conservatives are clinging to him anyway.

A widely held tenet of the current conventional wisdom is that while President Trump might not be popular overall, he has a high floor on his support. Trump’s sizable and enthusiastic base — perhaps 35 to 40 percent of the country — won’t abandon him any time soon, the theory goes, and they don’t necessarily care about some of the controversies that the “mainstream media” treats as game-changing developments. […]

But the theory isn’t supported by the evidence. To the contrary, Trump’s base seems to be eroding. There’s been a considerable decline in the number of Americans who strongly approve of Trump, from a peak of around 30 percent in February to just 21 or 22 percent of the electorate now. (The decline in Trump’s strong approval ratings is larger than the overall decline in his approval ratings, in fact.) Far from having unconditional love from his base, Trump has already lost almost a third of his strong support. And voters who strongly disapprove of Trump outnumber those who strongly approve of him by about a 2-to-1 ratio, which could presage an “enthusiasm gap” that works against Trump at the midterms. The data suggests, in particular, that the GOP’s initial attempt (and failure) in March to pass its unpopular health care bill may have cost Trump with his core supporters.

At long last, Donald Trump’s base appears to be shrinking. This raises the chances of impeachment, and will put tremendous pressure on Republicans to abandon Trump to preserve their midterm majority. I’m pissed the cause appears to be health care, and not the shady Russian ties or bad behavior, but doing the right thing for the wrong reason is still doing the right thing. It also fits in nicely with current events.

According to the forecast released Wednesday by the nonpartisan Congressional Budget Office, 14 million fewer people would have health insurance next year under the Republican bill, increasing to a total of 19 million in 2020. By 2026, a total of 51 million people would be uninsured, roughly 28 million more than under Obamacare. That is roughly equivalent to the loss in coverage under the first version of the bill, which failed to pass the House of Representatives.

Much of the loss in coverage would be due to the Republican plan to shrink the eligibility for Medicaid; for many others—particularly those with preexisting conditions living in certain states—healthcare on the open marketplace would become unaffordable. Some of the loss would be due to individuals choosing not to get coverage.

The Republican bill, dubbed the American Health Care Act, would also raise insurance premiums by an average of 20 percent in 2018 compared with Obamacare, according to the CBO, and an additional 5 percent in 2019, before premiums start to drop.

So keep an eye on Montana’s special election (I’m writing this before results have come in); if the pattern repeats from previous special elections, Republicans will face a huge loss during the 2018 midterms, robbing Trump of much of his power and allowing the various investigations against him to pick up more steam.

Proof from Fine-Tuning (2) » « Finding Her Voice