It’s been a weird week for Americans who support equal marriage rights for gay people. On the disappointing side, there was the more-or-less inevitable passage of an amendment to North Carolina’s state constitution that doubly extra-bans gay marriage (while smuggling in a bunch of other assholish nonsense for good measure). It also appears that Colorado would rather dither and adopt a faux-libertarian posture than see gay people achieve even second-class status. On the other hand, the President finally decided to alight from his perch on the fence* and state, finally, that he supports gay marriage. Of course, marriage is not the be-all-end-all of the gay rights struggle, but it has become a proxy for general acceptance of gay Americans as full-fledged citizens.

Whenever the gay marriage issue comes up, there is always someone in the conversation (and sometimes it’s me) who brings up the intersectionality between race and homophobia – pointing out that in California’s notorious “Proposition 8” battle in 2008, black Californians voted 70% in favour of denying marriage equality to gay people. It is often raised in discussions of the seeming hypocrisy in a group that was so long denied civil rights using those freshly-granted rights to deny others the same. I stumbled across an interesting analysis of actual voting data (rather than exit polls) that examines this exact question, and I thought it would be worth taking a closer look.

Black Californians, spurred on by the machinations of the Mormon church and their own homophobic zeal, voted overwhelmingly in support of a ban on gay marriage. This wide margin played a significant role in the passage of the proposition.

If it were true, we would see race (particularly being African-American) emerge as a significant factor in a statistical model trying to predict voting patterns from demographic data. After all, if race is the deciding factor explaining the exit polling (rather than due to some confounding effect), it should be possible to observe and measure its effect size.

In order to populate the model, the authors analysed a poll of over 1,000 California voters conducted immediately after the passage of the Proposition. In addition to basic demographics (age, gender, sex), participants in the survey were asked to identify their political affiliations (Democrat, Republican, Independent), their political alignment (liberal, moderate, conservative), their level of religious involvement (frequency of church attendance), whether they had any gay friends, and their race. All of these variables were loaded into a multivariate regression model** to see what the effect of each variable is when all the others are held constant.

When controlling for all other variables, race (being African-American or Latin@) contributed significantly to one’s likelihood to oppose marriage equality. However, so did age, religiosity, party identification and alignment: 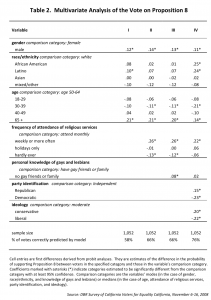 It is important to note that (look in the last row of the table) that even when you know all of this information about a person, you only have a 76% of accurately predicting which way ze voted. It is also important to note that if you control only for age, gender and religiosity, the significance of race disappears. What this suggests is that black religious conservatives/Republicans voted very differently form black religious liberals.

If we look at the extent to which the different variables influence voting intention, we get a much clearer picture: 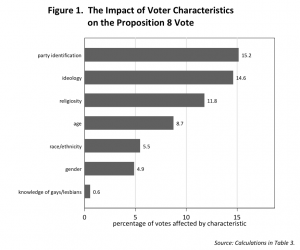 As you can see from the above figure, race was less important than political party, ideology, religiosity, and age. Only gender and personal association with gay people were less likely to play a role in predicting which way someone would vote.

So the question becomes how did the pollsters get the answer so wrong? If race wasn’t the big deal that the news reported, why did we see such a huge effect of race in the exit polls? Well, it turns out that new organizations are pretty much exactly as skeptical as you’d expect:

On average, the difference in support between African Americans and all voters in these four surveys was just two percentage points. The NEP exit poll finding—that black support for Proposition 8 was 18 points higher than Californians as a whole—is most likely an “outlier,” a result that is very different than what concurrent data trends suggest to be the case. 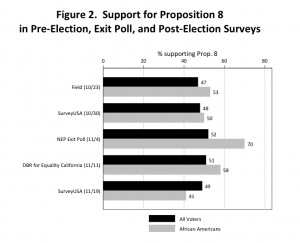 So the news channels took one poll with a particularly sexy finding and ran with it. Based on the other polls, it looks as though black voters were only slightly more likely to vote for the Proposition as they were to vote against it. While it makes for a good story (and fits neatly with the image of the black community being rife with homophobia), it does not appear to be the case that race played a meaningful role in the results of that particular vote.

There was, however, a very interesting result that fell out of the analysis that I think is worth a sentence or two of exploration:

I find this particularly fascinating because it tracks well with the idea that exposure to people from a variety of backgrounds (be they racial or otherwise) makes people more pro-social. It is harder to suppress empathy for others in general when your home environment gives you constant reminders that not everyone experiences the world the way you do. Now, I may be reading way too much into this finding – there are a variety of other potential explanations for this phenomenon, but it is worth taking a closer look. Does heterogeneity breed tolerance, or is there some other force at work here?

One last finding, that I think might cheer you a bit: 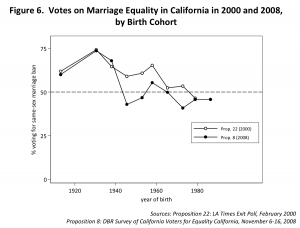 The idea that gay rights acceptance is only a matter of time is a fairly popular meme, and analysis of the data suggests that it has some merit. Not only did fewer people vote for Proposition 8 than voted for a similar amendment that was passed previously, but young people were far more likely to support equality. Not only are the young more supportive, but as time goes on even those who are not necessarily ‘young’ are coming around to the idea that gay people might be human too.

Despite much protestation to the contrary, the passage of Proposition 8 in California cannot be chalked up to a racial issue. Black Californians were not much more likely to vote to withhold recognition of human rights than non-black Californians. While it is still disappointing that they didn’t see the hypocrisy any more than other groups, it is at least comforting to know that, far more than race, it was party affiliation far more that explains what happened that day in 2008.

*This is a decidedly unfair characterization, given that the President has worked pretty hard to repeal DADT and finally put DOMA out of its misery. I just find the “well I believe people should have rights, I just don’t personally think they deserve them” attitude adopted by many ‘centrist’ Democrats to be so cowardly as to beggar belief.

**The trick to understanding what a multivariate regression model is, is to think about the y = m(x) + b equation for a line that you remember from high school math. Now imagine that instead of just a y- and x-axis, you have multiple axes, such that y = m1(a) + m2(b) + … + b. Solve for y.

Because I am an atheist: Rogue » « The worst thing in the world (Wednesday edition)