This is the labeled pic. But it’s been shrunk badly to fit FTB. Click on it for a very big, expandable, video card smashing image at Nasa photo-journal. Here’s a few expanded sections. 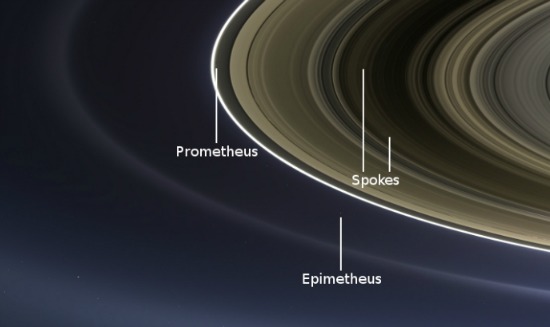 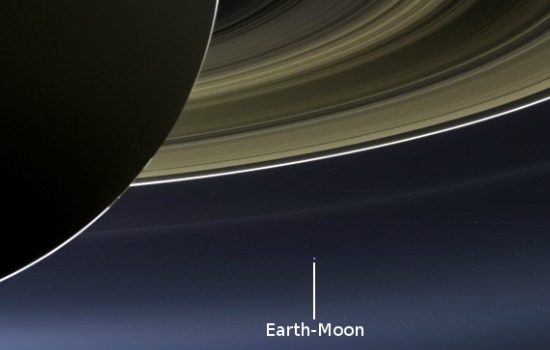 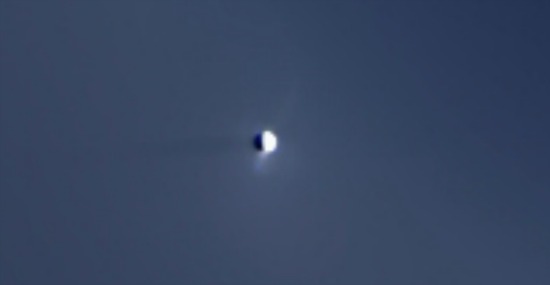 The reason that’s so amazing is its the tiny moon Encaledus. Those jets coming out of it aren’t optical artifacts, they’re real. Enceladus is covered with cryo-volcanoes, volcanoes of watery steam turning rapidly into ice in the frigid nether regions where Saturn plows through the solar system. We know the Saturnian system is a particularly violent place. The rings themselves probably started out as a massive collision between icy moons. Some planetary astronomer speculate this must have happened in the last few hundred million years, because the rings wouldn’t be so bright or last too long due to subtle dynamics at work on them.

But they may be more permanent than once thought, and that may be in part because other moons like Enceladus are being gravitationally squeezed between the mass of Saturn and outer moons like Titan and Rhea. The result is a subterranean ocean of slushy or warm water that periodically shoots up through cracks and escapes into space thanks to the low mass of small moons. Some of that material would almost certainly end up in the ring system, coating existing objects there and forming new ones, keeping the rings sparkling and fresh. At least that’s one good possibility.

Titan, Saturn’s largest moon and the only moon in the solar system with a thick atmosphere, also may have an underground ocean of liquid water, a much larger and active one, somewhat like the Earth has a mantle of liquid rock. Whether or not there’s microorganisms in either one is an open question, but Titan would probably be the best bet there, as molten rock tends to sterilize things rather well.

I feel pretty damn good! » « I’m too sexy for this blog