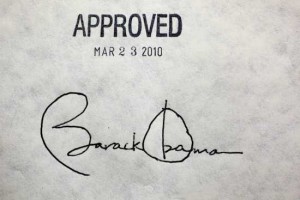 Presidential signature on the ACA. Click image for round up on Daily Kos. Obama and Romney scheduled to address the nation within the hour.

The Affordable Care Act was upheld as constitutional by the Supreme Court today. Conservative Chief Justice John Roberts, appointed by President George Bush, provided the key swing vote. Want to know more? The live coverage at SCOTUS Blog is just superb. The actual decision is complicated, but everyone I’ve heard from so far is calling it a huge win for the White House:

Basically, the justices said that the individual mandate — the requirement that most Americans buy health insurance or pay a fine — is constitutional as a tax.

And now I can take off my nice clothes: I won’t get fucked by creepy old men in black hoods, at least not today. Watching the usual suspects twist themselves into knots over this will be entertaining to say the least. How long before Roberts is called a traitor and cries for his arrest, impeachment, or even execution arise? I wouldn’t be surprised if it’s already happened.

What will Mittens do? He’s on the record both lauding the individual mandate when he did it, and criticizing it harshly when Obama used the same approach. It’s a good guess the Romney campaign has absolutely no idea what they should do. If I had to bet, given Romney’s track record, I’d wager a major triple twisting round-off flip-flop, flip-flop, back-flip is in the works. BUt is base is furious, so he has to be real careful.

Speaking of The Base, which literally translates into Arabic as Al Qaeda, dipshit teaparty asshole Rand Paul has weighed in with his, uhh, expert legal opinion that ‘just because a few people think it’s constitutional doesn’t make it so.’

President Obama will address the nation with the hour. I have some advice for them: get out in front of this. Standing idly by while the Kochwhores cooked up astroturf teaparty campaigns throughout 2010 allowed them to misconstrue the ACA in their own evil way. That was right up there strategy wise with letting OJ try on the murder glove. This is political warfare, a bare knuckles brawl, where the stakes are nothing less than life and death for millions of Americans.

This may be a political win for the White House, but the real winners are We the People. And that’s long overdue, because We the People have taken a lot of hits over the last few years. Without a super majority in the Senate, 60 senators willing to stick their necks out, a President Romney cannot repeal the ACA. He can weaken it, he can attack it, he can sabotage it through various executive orders and other shenanigans. But it cannot be repealed without first passing the Senate.

That means if you currently have no affordable insurance, or you are getting dicked around by the insurance companies playing their usual games, come 2014 you will be covered. No more hanging your head in shame at the ER, or getting harassed over monster bills you can never pay off by bill collectors. No more bankruptcies, no more being chained to an awful job because you cannot risk losing you and your family’s health insurance.

I’m happy the Obama administration prevailed. But I’m ecstatic in the real hope that my friends, my family, readers here and elsewhere in the States, and even my understandably disappointed conservative friends and enemies, will be able to count on comprehensive health insurance simply by virtue of living in the US. It’s about fucking time.