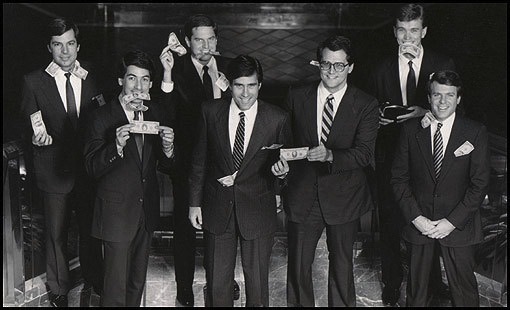 Well, well, well, look who’s shocked to discover Mitt Romney making a play for unapproved voters. An email arrived in my inbox from a religo-political group with lots of alarming exclamation points! And breathless urgency! An excerpt:

“Grenell is not just gay, but a gay activist who pushes for same-sex marriages,” says blogger Joel McDurmon.

Sorry, no link, it was an email. Besides, given the notable lack of accuracy — and deep affection for lies — shown by both the Romney campaign and the religious right, I have no idea what the truth is here and don’t want to reward anyone with page views. But if Romney did force these clowns to the fainting couches with teh gay I could care less. What I care about is what Romney cares about, and he only cares about two things: Mammon and Mormonism, or maybe winning, too, which would make it three things.

That Mittens worships money is not an issue. Not only does everyone accept it and his record prove it, worship of money is tacitly approved by those who also worship Republican Jesus. On the other hand, worship of Joe Smith as a 19th century prophet and taking the Book of Mormon seriously is a whole different story, one Romney has downplayed for good reason. His base has been led to believe Mormonism is a scary cult meeting in a midwest farm house listening to a sermon by the ghost of Manson-Koresh. Mormon New World Jesus is not nearly as popular among the right-tards as almighty Mammon and that’s saying it mildly. Too bad, because that’s reportedly a big influence on Romney and watching wingnuts choke and spew on that would be entertaining to say the least.

But Romney cares about winning, a lot, for reasons inexplicable to me given his wealth and cushy lifestyle, so he’s going to have to tack left on some issues or get killed in the general. Teh gay is a pretty safe one, there is growing support for gay rights across the political spectrum. Now, should he win, which Mitt Romney actually shows up to swear his Oath, the Massachusetts moderate or the scorching primary wingnut, is the 64 trillion-dollar question. But given his past performance, it’s a fair inference Mammon will be the deity Romney devoutly honors from his first hypothetical day in office, no matter which of the many past political voices in his head happens to be screaming the loudest.

More on Planetary Resources as the USS Enterprise wows onlookers » « Dan Senor: the man who was too wrong to fail