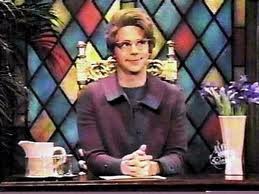 This is one way the GOP is trying to kneecap Santorum, making hay out of something he said back in 2008 about Satan.  Suddenly, for the fundamentalist infested Republican Party, talking about Satan as a real threat to the nation like this is cah-raaazy!

(DailyKos) — “This is not a political war at all. This is not a cultural war. This is a spiritual war. And the Father of Lies has his sights on what you would think the Father of Lies would have his sights on: a good, decent, powerful, influential country – the United States of America. If you were Satan, who would you attack in this day and age… He didn’t have much success in the early days. Our foundation was very strong, in fact, is very strong. But over time, that great, acidic quality of time corrodes even the strongest foundations. And Satan has done so by attacking the great institutions of America …” — Santorum 2008

The gubmint should stay the hell out of people’s bidness! » « Word out to GOP faithful, throw Santorum off the train