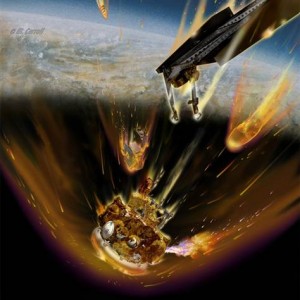 Update 12:10 AM CDT: nothing official but it seems to have reentered and crashed into Pacific Ocean a few mins ago. Click image above for latest info.

The ill-fated Phobos-Grunt mission, which would have returned samples from the tiny Martian satellite Phobos, will plunge into the stratosphere later today and become a spectacular meteor. Debris from the 15 ton spacecraft, which is carying more than 10 tons of toxic rocket fuel, is expected to strike the earth, although where exactly that happens is still literally up in the air:

(ABCNews) — Roscosmos said the unmanned Phobos-Ground will crash between 1641 and 2105 GMT (11:41 a.m. and 4:05 p.m. EST). It could crash anywhere along the route of its next few orbits, which would include Europe, southeast Asia, Australia and South America. The U.S., Canada and much of Russia are outside the risk zone.

Russia has had terrible luck with missions to Mars, several attempts to teach the Red Planet by the nucleus of the former USSR’s space program have ended in failure. Enough that some weird conspiracy theories of alien or government intervention have began popping up. The explanation is far more mundane of course: Russia’s unmanned space program, once considered first class and second only to the US, has been underfunded and undermanned since the fall of the Soviet Union 20 years ago. Lack of resources and manpower comes with heavy cost in space exploration and we’re seeing that playing out at the edge of space today with Phobos-Grunt.

Lets All Go to the Lobby: Huntsman goes out swinging » « Boo-hoo! The religious right has a big problem