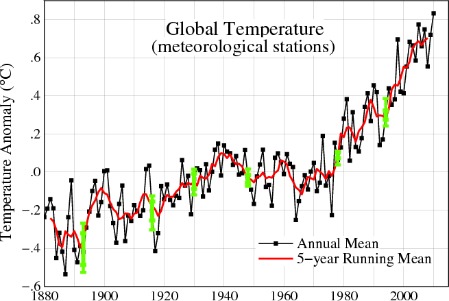 There are two climate change articles on Google news that caught my eye this morning, not just because of the titles, but because they’re juxtaposed in such a way that they inadvertantly illustrate the nature of the manufactured controversy better than a single article could. The first is called Climate change denial still runs strong in US and reviews the gulf between climate scientists and data, as illsutrated in the chart above, and public sentiment swayed by decades of misinformation spread in large part by the fossil fuel and energy indsutries. The second is a piece in the Daily Mail, naturally, trying to create a controversy over BBC executuves consulting with climate scientists about how to present the science and what the consequences of increasing global temperatures might be to culture in general. Here’s how the latter opens:

Britain’s leading green activist research centre spent £15,000 on seminars for top BBC executives in an apparent bid to block climate change sceptics from the airwaves, a vast new cache of leaked ‘Climategate’ emails has revealed. The emails – part of a trove of more than 5,200 messages that appear to have been stolen from computers at the University of East Anglia – shed light for the first time on an incestuous web of interlocking relationships between BBC journalists and the university’s scientists, which goes back more than a decade.

In the past when reporters and editors consulted experts in a field and attempted to weed out whackos and grifters, it was called journalism. But in the Daily Mail’s vernacular it’s a more sinister “incestous relationship” lasting a decade! Uh-huh, see how that works folks?

The funny thing about climate change — and I don’t me funny haha, more like funny eye/roll and groan — is the evidence is so powerful and easy for anyone to understand. Among creationist grifters one aspect of the fleecing is to demand evidence for evolution happening now, right now, and then reject any adaptations or speciations offered. It’s easy to do, the transitions day to day over the life of a person are not dramatic, imagine if they used the same tactics plate tectonics! But when it comes to climate change the evidence is simple, it is indeed happening now, right now, and since everyone has experience with thermometers and outdoor temperatures, it’s easy for the laypublic to understand that evidence.

The climate change denial industry literally reduces to urging people to ignore their lying eyes and listen to the energy industry scientists and lawyers. One way to do that is to demonize climate scientists and that’s exactly what this story in the Daily Mail is attempting to do in a somewhat feeble manner. Any day I expect a breaking story about a climate scientist at a university sexually assaulting an underage boy. The idea being if one single climate scientist is ever caught doing anything illegal or nasty, it automatically renders the entire field of climate science irrelevant.