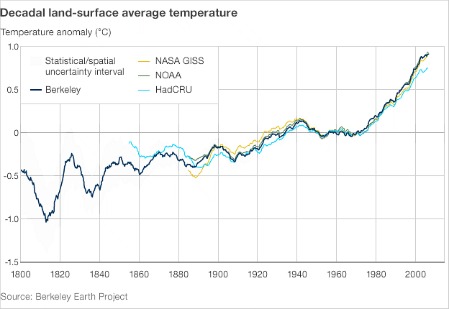 If Anthony Watts is an objective skeptic he has a very interesting weekend ahead. For those of you who aren’t familiar, Watts is a former weather-caster turned blogger and global warming skeptic who writes at What’s Up With That. Sources tell me he may have tipped his hand over a hot-off-the-press independent climate study which confirmed the same rising temperature trend found by NASA and other climate scientists over the last century. The story begins with Watts fluffing the scientific cred of that study’s authors and editors back in March:

I’m prepared to accept whatever result they produce, even if it proves my premise wrong. I’m taking this bold step because the method has promise. So let’s not pay attention to the little yippers who want to tear it down before they even see the results. I haven’t seen the global result, nobody has, not even the home team, but the method isn’t the madness that we’ve seen from NOAA, NCDC, GISS, and CRU …

NASA madness! But the Anthony Watts who chimed in on the same project yesterday, after those results were partly released, sounds very different:

What’s up with that? Well, Watts has long been criticizing the data collected by thousands of weather stations around the globe and the methodology used to correlate and present that data. Boiled down, Watts has been raising the possibilty that thousands of climate scientists are just too fucking stupid or careless or dishonest — or involved in some shadowy cabal — to realize or admit a bunch of their thermometers are located too close to urban heat sources and are thus getting erroneously high readings (It goes without saying that the converse possibility, that some detectors are affected by cooling, is never mentioned). Ergo, global warming over the last century or two as measured by empirical observation is a statistical artifact and can be dismissed.

This isn’t just Watts, I don’t mean to unfairly single him out and I don’t think he’s some kind of nut. He reads to me like a sincere skeptic. And there are enough climate skeptics behind the idea that the authors and editors of a new, independent climate study, called the Berkeley Earth Project, bent over backwards to keep representatives of those folks in the loop on the data collection and analysis process. Their scientific task was to collect and correlate temperature data on their own, independently, and compare. According to the homepage for the Earth Project, the scientists involved all highly value complete transparency and made a particular effort that a wide variety of concerns — including the controversial notion that a critical portion of the thousands of thermometers and other devices used by the climate science community were, over many decades, inadvertantly or intentionally placed near open firepits or air conditioning exhaust vents or in obsolete buildings or whatever — were addressed.

Maybe I’m reading it wrong, but Watts sure seems to be describing himself as in the thick of this unusual arrangement. One that’s not unheard of, but still a little weird. Imagine if a group of independent leading geologists were assembled to run controlled experiments using radiodating on thousands of samples, while keeping young earth evangelist Ken Hamm from Answers in Genesis filled in, and you get the idea. The study’s authors and editors seem to be giving skeptics like Watts and his cohorts a level of consideration they probably do not scientifically deserve. I only bring this up because, if you read Watts’ references to his intimate role in the affair, that rare privlege appears to be one of the things Watts is now complaining about.

Fast forward to this week: the initial release from the Berkeley Earth Project supports, to no one’s surprise, the data used and methods employed by dozens of independent scientific organzations all over the world were sound. The project concluded the earth is warming, roughly one degree C over the last century or so. And that’s not all! After collecting and crunching the data, the study got results statistically identical with those produced at NOAA, NASA, CRU, and a bunch of other organizations, as shown in the graph at the top of this post. The beautiful part is the study was largely funded by the kind of money — including Koch money — usually intended to buy much more friendly results. It’s madness!

So unless yet another group of research scientists are utterly incompetent, or part of a worldwide conspiracy, the wobbly claim that data stations are run by ignoramuses and frauds is mortally wounded.

It’s a reasonable inference that Watts now realizes, in large part because of his own claims of participation, that he’s been dealt a devastating blow and placed in an unenviable ethical dilemma. He’s a talented writer and top-notch communicator who has built up respectable traffic, he’s worked hard to carve out some real influence and preserve his credibility. In fairness I have almost certainly oversimplified and perhaps distorted some of his views, which I’m sure are nuanced and informed. But the ideas about corrupt data and conspiracies, which helped generate some of that notoriety, are now seriously weakened, and that seemed to happen not only while Watts was being kept unusually well informed, but while he wrote of his support and faith in the project and the scientists chosen for it all from that same lucky perch — at least right up until the project confirmed one of the major climate findings of the last 50 years of research conducted by the world’s premier climate science organizations.

He now seems to be saying the study was not valid while implying it’s not been released officially and so no one can say if it’s valid, plus it wasn’t peer reviewed or hasn’t been yet.

That sounds a little confusing and little desperate to me. But it doesn’t have to be. Seems that Anthony Watts has a choice, like any other climate skeptic who values credibility and who pushed the urban Heat Island effect. He can now choose to confront those results, or he can continue to distribute now tainted information in spite of them.

US involvement in Iraq to end, US troops home by holidays » « Independent group finds earth really IS warming