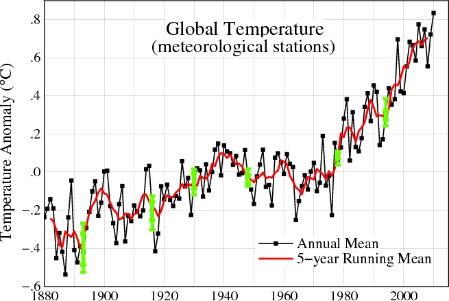 Who you gonna believe, those silly NASA scientists and your lying eyes, or the divine Rick Perry?

Last Saturday I had the chance to visit with Dr Jeff Masters of the superb WeatherUnderground on the Daily Kos radio show (If you’ve never read Jeff’s harrowing account of flying into category 5 Hurricane Hugo and suffering an engine fire, almost forcing a crash water landing inside the eye, check it out). Hosts Armando and David Waldman joined in, and most of the conversation centered on hurricanes. Not surprising, Irene was bearing down on the eastern seaboard. It was informative, so much so we hope to have some more science guests on in the near future. And as luck would have it, I managed to hog the mic and ask Masters a couple of non Irene specific questions.

The first of these was on behalf of my friends and family in Texas: was there any end in sight to the record drought plaguing the Lone Star State? Masters answered without hesitation, saying there was nothing in the data suggesting any break, and this late in the season, odds were good the only relief to Texas and neighboring states will come with the change of seasons. This was disappointing, perhaps Rick Perry should pray harder, much harder. We haven’t had rain in 6 months, and it was officially 112 in Austin on Sunday. It would almost be worth having to put up with Perry smugly strutting around like God’s personal water bearer just to put an end to the late summer misery.

The other question was could a greater frequency in tropical cyclones like Irene, along with record droughts and floods, be examples of what atmospheric scientists call the loaded dice of Climate Change? I actually apologized for some reason when asking it. I wish there was a transcript, but working purely from memory, Masters’ reply was something along the lines of “That’s a perfectly legitimate question.” And went on to say essentially, absolutely, we’ll know more after the data is in and crunched. But cyclones and droughts could be examples of loading the dice, and some of them probably are.

We have to wonder, what the future holds? The effects of climate change have barely begun, there’s enough greenhouse gases in the atmosphere to drive a warming cycle for at least centuries, if not millennia. The one thing working in our favor is the big fat reservoirs are being affected by peak production limits. Large ones like Ghawar may be at or near decline. There are no other large reservoirs anywhere near the size of the handful which produce about half the world’s oil. So once they started peaking, the price goes up, less oil is burned simply because it’s expensive, and alternative forms of energy become more attractive. It’s a way out, almost like a an escape hatch built into nature.

But there’s plenty of coal left. There’s a big uptick in wanting to frac every last cubic foot of domestic natural gas. Deposits of oil in tar sands and shale, up to now considered too deep or think or dilute to produce economically in volume, are generating intense interest. And that reminds me of what James Hansen said when I spoke with him and reviewed his book Storms of my Grandchildren. After building up the scientific basics of what drives earth’s climate, Hansen wrote in the book (And affirmed to me) that, “After the ice is gone, would Earth proceed to the Venus syndrome, a runaway greenhouse effect that would destroy all life on the planet, perhaps permanently? While that is difficult to say based on present information, I’ve come to conclude that if we burn all reserves of oil, gas, and coal, there is a substantial chance we will initiate the runaway greenhouse. If we also burn the tar sands and tar shale, I believe the Venus syndrome is a dead certainty.”