If you watch hurricanes a lot, you might notice they often turn more than initially forecast. Systems moving west curve more north than expected, north moving storms curve more east. It doesn’t happen all the time, but it happens alot. When the tropical depression that gave birth to Irene first formed, many storm trackers assumed or hoped this system would follow suit and spare the US east coast. For now, that does not appear to be the case. Via Jeff Masters at the WeatherUnderground: 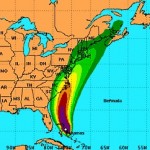 Irene will likely hit Eastern North Carolina, but the storm is going northwards after that, and may deliver an extremely destructive blow to the mid-Atlantic and New England states. I am most concerned about the storm surge danger to North Carolina, Virginia, Maryland, Delaware, New Jersey, New York, and the rest of the New England coast. Irene is capable of inundating portions of the coast under 10 – 15 feet of water, to the highest storm surge depths ever recorded. I strongly recommend that all residents of the mid-Atlantic and New England coast familiarize themselves with their storm surge risk. … [See] the NHC’s Interactive Storm Surge Risk Map.

Of particular interest will be the effect of high winds should Irene roll over Manhattan or other large cities. The juxtaposition of tall buildings, narrow streets, and whipping wind could result in regions of difficult to predict dampening and amplification working chaotically on acres of siding, glass windows and concrete statues and other structures hundreds of feet off the ground. The streets of the Big Apple could become zones of jagged flying debris, an urban artillery range with glass and metal shrapnel ripping in all directions, punctuated by boulder-sized chunks of concrete raining down. Even a relatively modest Category 1 storm would be a potential killer for anyone who pokes their head outside. In addition the subways could flood, some taking days or weeks to repair, inconvenient for commuters, fatal for uncounted thousands of homeless underground dwellers.