Amazing customer reviews of Freedom To Love For ALL: Homosexuality is not Un-African

REVIEW: Yemisi Ilesanmi, FREEDOM TO LOVE FOR ALL: Homosexuality is not Un-African!

An adjective formed from the name of a country or continent can provide a serviceable, if general, basis for a discussion on ideas, events, places, etc. Greek ideas, French History, Arabian landscape.  But add the negative prefix Un- (as in Un-American or Un-African) and you are in the realm of the spurious and condemnatory, of denial, of mystiques that other people ‘perceive’ and subscribe to and expect you to as well, a never-fully explained free-standing adjective that  is used as a silencer and trump card in any argument.  Un-Biblical is another example.

In this short book of essays, Yemisi Ilesanmi, a  human rights advocate and trade unionist, counters the indefinable ‘Un-African’ from  several angles, fact, logic and persuasion.

Homosexuality is common to all peoples: Africa is no exception. Many African cultures viewed homosexuals and transgender as Gods: the Yoruba god of thunder, Sango, dressed as a woman; the Northern Congo Azande warriors routinely married male youths who functioned as temporary wives. Several of the Kings (Kabakas) of the Buganda tribe in Uganda  were gay.   And the first recorded gay kiss is from an Ancient Egyptian tomb. Homosexuality was not a foreign import.

Indeed homosexuality was not a cultural value of the West, and has had to be fought for. Homophobia, however, was part of the baggage brought in with colonialism and  Christianity. The white imperialists introduced the Sodomy Laws. Many former  colonies such as  Canada, Australia and South Africa got shot of them years ago; other  colonies, still cling to them.  Some countries are extending the laws. Uganda and Nigeria, in particular – and to such a degree that  ‘black homophobia has replaced white racism as the newest form of intolerance.’

The Nigerian Same Sex (Prohibition) Bill, 2011, (known as the ‘Jail the Gays’ Bill) states that a marriage contract or civil union between persons of the same sex is prohibited, and may not be solemnised in any place of worship. A  marriage certificate issued by a foreign country is void. ‘The registration of gay clubs, societies and organisations, their sustenance, processions and meetings are hereby prohibited. The show of same sex amorous relationship directly or indirectly is hereby prohibited.’ The punishment is 14 years for the couple involved in the marriage, 10 years for anyone involved in abetting a marriage, and 10 for operating a gay club.

Twelve Northern Nigerian states have adopted Sharia Law, for which homosexual acts are punishable by stoning.  (Even this doesn’t go far enough for the  deputy chief Imam of Abuja who says, ‘Homosexuality and lesbianism are just too dirty in the sight of Allah. Those who engage in them deserve more than capital punishment. When they are killed, their corpse should also be mistreated.’)

Many of the legislators behind the ‘Jail the Gays’ Bill have less than savoury personal lives, several having imported a child bride. Even more have not sufficiently distanced themselves from corrupt politicians who have been in power too long, are not delivering, and are eager to find a scapegoat for their own administrative failings. They give themselves away in their hysterical language, outlandish claims and blatant non sequiturs. The former President of Nigeria, Olusegan Obasanjo  claims, ‘Homosexuality is unBiblical, unnatural and Un-African.’  The Redeemed Christian Church of God  preaches, ‘If we allow same-sex marriage there there will be no procreation and we may become the last set of senators and no others to take over from us.’ Other choice comments include, ‘Same sex marriage is spreading round the whole world just like pornography and terrorism which has become the order of the day if not arrested in time.’  Yemisi has no problem in demolishing these arguments. She takes particular pleasure in dealing with the preposterous claim, ‘If the human rights of homosexuals are recognised, rapists, paedophiles and people who sleep with animals will start claiming human rights violations, too.’

She quotes Wole Soyinka, ‘Legislators fail to distinguish between personal bills and interventions in private life. What people do in their bedrooms is no business of mine. It should not be the business of legislators.’ Yemisi adds, ‘Rather than deal with problems such as poverty, corruption, unemployment, poor security and Boko Haram, the legislators demonise the gays.  When will they  stop discussing who is sleeping with whom, and start making laws to move this underdeveloped, oil-rich nation forward?’  She goes on to say that the truly ‘Un-African’ practices are the killing of twins, child marriage and female circumcision, and the laws that do not allow women to inherit land. She adds that there is one truly unwelcome foreign import, and that is the influx of Evangelical Christians from America.

Yemisi makes a case for LGBT Rights as Human Rights, but in her campaigning in Nigeria she has been hampered not only by religious bigotry, misinformation and irrelevant quotes (mainly from the uniquely ghastly Book of Leviticus) but that free speech and majority rule do not always work to the benefit of the minorities.  Free speech permits hate speech, and hate mail. Social networks are full of prejudice. Journalists tamper with information. Police never act on behalf of victims. However much nominal free speech there may (or may not)  be for minorities in the end the bigoted majority will prevail. ‘Minority can have their say, but majority will have their way.’ Even in South Africa, which in 2006, became the fifth country in the world, and the first in Africa, to legalise same-sex marriage  the law is not supported by the majority, and ‘curative rape’ as a way of preventing lesbianism is not rare.

Yemisi welcomed the support of the Nigerian Humanist Movement, who made representations against the Bill. ‘Gays, Lesbians, Bisexuals, Transsexuals are an integral part of society. This unwise and ultimately futile attempt to outlaw same-sex marriages and by extension homosexuality, smacks of fear-mongering, and a lynch-mob mentality.’ But she laments the lack of support from the Nigerian Left, who do not consider gay rights a majority struggle. Human rights, some claim,  can only be assured when capitalism is overthrown; the LGBT fight is a mere diversionary tactic to take away attention from pressing economic problems. Yemisi disagrees. There were successful  demonstrations for the right of education, for women’s vote, and the freedom of association and expression.  She also points out that in 1917 Lenin abolished the Czarist laws against homosexuality, (which Stalin reversed). Fidel Castro came to see the light and apologised for his early laws against gays.  It is, she claims, all one fight. She quotes Desmond Tutu,  ‘My brothers and sisters, you stood with people, of colour who were oppressed because of their skin colour. If you are going to be true to the Lord you worship, you are also going to be there for the people who are being oppressed for something they can do nothing about: their sexual orientation.’

A brave and timely book, not the last on the subject. Yemisi’s advocacy of the decriminalisation of homosexual acts and her call for recognition of LGBT rights as human rights have exposed her to many threats, including beheading.

Tutu:  ‘If you are neutral in situations of injustice, you have chosen the side of the oppressor.’

John Dixon is a member of Gay Authors Workshop. He has poems and short stories published by Paradise Press.  www.paradisepress.org.uk

Amazon Customer Reviews of Freedom To Love For All:Homosexuality Is Not Un-African!

This review is from: Freedom To Love For ALL: Homosexuality is not Un-African (Kindle Edition)

Your copy of ‘Freedom To Love For ALL: Homosexuality Is Not Un-African!’ is only a click away! Thanks. 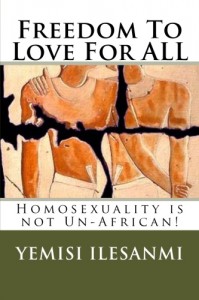 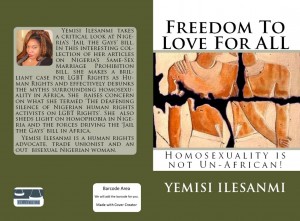 “We do not learn about our history by sitting in cages or sitting in slave ships and re-enacting how many lashes we had and seeing our skins with all those abrasions.” On Exhibit B-The human zoo. A great talk by Esther Stanford-Xosei. » « Exhibiting Africans in a Human Zoo is not Art, it is Racist Voyeurism! Please sign this petition.