It is not art, it is an outlet for him and his fellow racist, privileged white people to enjoy voyeuristic, closeted racist pleasure at the expense of black people, while they pretend to sympathise with what we suffered and still continue to suffer. Not In my name and not in my colour! Enough is enough! 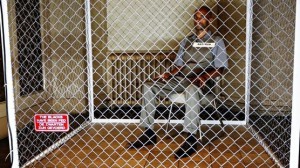 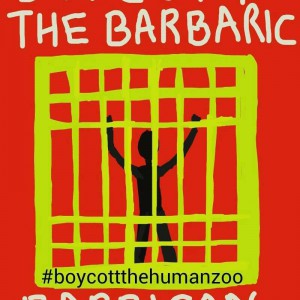 This is a petition put up by Sara Myers, she has explained perfectly why this is a racist, dehumanising and patronising piece of shit not art.

A piece of work, ‘Exhibit B’, by the controversial white South African Brett Bailey is coming to the Barbican Centre in London this September. It is based on the 19th century phenomenon of the human zoo, in which African tribespeople were displayed for the entertainment of European and American audiences. One case describes the Congolese pygmy Ota Benga who, in 1906, was put on display at the Bronx zoo in New York alongside the apes and giraffes. They literally created human zoos at the expense of black people.

This piece of work by Bailey has been toured around Europe sparking protests and outrage by anti-racism campaigners. Now it is coming to London, and I’m calling on the Barbican not to display it.

I’m a Black African mother from Birmingham. I campaign and work with my community to try to breakdown the stereotypes that black people have to struggle against in society on a daily basis. I want my children to grow up in a world where the barbaric things that happened to their ancestors are a thing of the past. We have come a long way since the days of the grotesque human zoo – we should not be taking steps back now.

If Brett Bailey is trying to make a point about slavery this is not the way to do it. The irony gets lost and it’s not long before the people behind the cage begin to feel like animals trapped in a zoo. One of the actors in his piece said “How do you know we are not entertaining people the same way the human zoos did?”

Bailey himself sounds unsure as to the impact of this work. In an interview with the Guardian he says: “For all I know, I could look back at Exhibit B in 10 years and say, ‘Oh my God, I am doing exactly what they are accusing me of.”

Please join me in calling on the Barbican to withdraw the racist Exhibition “Exhibit B – The Human Zoo” from showing at the Barbican from 23rd-27th September.

It has been brought to our attention by the Guardian newspaper on the 11th August “Edinburgh’s most controversial Show Exhibt B- The Human Show”, that the Third World Bunfight/ artist Brett Bailey’s Exhibit B, is due to be shown in the multi-cultural city of London from the 23rd-27th September at the Barbican.

We wish to register our utmost disgust at what we consider to be an outrageous act of complicit racism with the Barbican agreeing to the housing and display of this production. White South African Brett Bailey claims his human zoo vanity project is “art”; just how are we as Black African’s supposed to respond to this? We think the response of several of the participants in his project is telling. This is simply an exercise in white racial privilege – if it isn’t, then perhaps Bailey can explain why he didn’t use white people in his zoo. After all, wouldn’t him doing so be both more striking and send a clearer message?

The attempt to justify it, as Brett Bailey says, on the basis that it is ‘challenging’ and that “I’m creating a journey that’s embracing and immersive, in which you can be delighted and disturbed, but I’d like you to be disturbed more than anything.” is nothing more than that of a racist white man taking the opportunity given to him on the platform that the Barbican is providing to repaint a picture that puts Black African people back into a space which we are superficially encouraged to believe we have been ‘freed’ from.

We as Black African people, do not need to be reminded or re-brainwashed into thinking we are less than. To camouflage this assault behind the mask of a ‘respectable’ institution such as the Barbican is tantamount to mental terrorism. What Bailey and his ilk (disturbingly many of whom are black) are doing is cynically courting attention to generate attention, thus sales. And they are using black bodies and the bloody history of white supremacism to do so. None of these artists would dare confront, say, Muslims or Jews in this way, because they know the potential ramifications for them. But it seems Black African people, continue to remain fair game, just as we have been for centuries.

We would argue that The Barbican, by default, agrees with Brett Baileys statement; ‘What interests me about ¬human zoos is the way people were objectified. Once you objectify people, you can do the most terrible things to them’. The likes of Bailey and his apologists need to think about how it would feel if they had their ancestors and relatives caged in the name of art. Failing this, they should always expect to be seen and shown for what they are: smug, privileged cynics, exploiting Black African lives and history.

This is a statement of fact and when couched in the comfort of the Guardian newspaper it suggests intellectual validity however the rhetoric falls apart when it appears only Black African people can be occupiers of human zoos when in fact as another human, Sir Nicholas Kenyon, you should experience directly what it means to be in these human zoos. For this piece to be truly ‘challenging and disturbing” to those who originated and perpetrated these atrocities should be subjects in these human zoos, but that will not happen as it is all too evident that a white supremacist mind-set has come into play here.

We are deeply offended yet not surprised that the colonialism this piece purports to expose does nothing more than reinforce how effective it was and remains as a caging instrument of white supremacists. We charge the Barbican with exhibiting institutional racism for agreeing to stage this poison. We demand you reconsider your decision and choice of material and withdraw it from the programme. If you do not withdraw this exhibition from your programme we intend to protest outside the Barbican on the 23rd September 2014.

I am appalled and disgusted by this exhibition and I hope you are too. Please take action, sign the petition and if possible contact the people at the Barbican Centre to register your disgust at their hosting of such dehumanising piece of vile work in the name of Art. 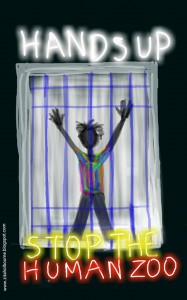 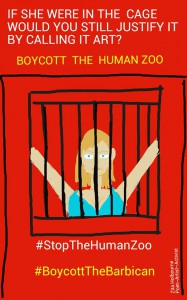 Reviews- Freedom To Love For ALL: Homosexuality Is Not Un-African! » « LGBT Rights in Africa: Why we need international solidarity- Interview on SkyNews