The Co- Director of the group Nigerian Atheists, Dr Tunde Arogundade also confirmed that the secretary of the group, Kunle Ogunyemi, did not consult with him before asking foreign bloggers to publish the minutes of the group meeting.

This is not good practice.

I am not aware if other members that attended the meeting were sent this minutes for amendment and approval  but I do know the minutes was never sent to me.

Yemisi Ilesanmi talked about her personal effort in promoting reason and combating religious fundamentalism through her blog and facebook page; however, she opposed the clarion call that atheists should work to convince religionists to give up their religion for reason. Defending her argument, she asked if there is any standard to prove that atheistic views are the right or the superior ones and added that being atheist does not interpret as being intelligent or super intelligent. This position resorted into an argument between Ogunyemi Adekunle and Yemisi Ilesanmi but Prof. Tunde was able to put the argument to rest and urge the meeting to move to the next item.

As I recalled, I strongly and still strongly hold the view that ATHEISM is not about CONVERTING religious believers to give up their religion but about promoting Logic and Reason to religious and non religious believers.   The statement “she asked if there is any standard to prove that atheistic views are the right or the superior ones and added that being atheist does not interpret as being intelligent or super intelligent” has nothing to do with the reason I objected to the opinion that Atheism is a ‘Conversion Tool’ to preach the gospel of atheism to believers. I was quoted out of context.

Also, I remember using the statement about atheists not necessarily being intelligent than others when talking about my experience with African homophobic atheists and also during a particular heated debate when one of the Nigerian Atheists group members present said he would circumcise his female child, because it is part of culture. Yes, I spoke out against circumcision and indeed reiterated in that heated debate that being an atheist does not automatically mean you are more intelligent, just that you are intelligent enough not to belief in the existence of a god or spiritual being. However, I have been grossly misrepresented in the minutes of the meeting and quoted out of context.

The second line where I was mentioned states and I quote

Yemisi Ilesanmi complained that the mission is too broad and called for it to be cut down to cover only atheists rights; explaining that Nigerian Atheists Organization should have a singular focus of fighting for atheists’ rights in Nigeria rather than all encompassing rights activism.Ogunyemi Adekunle disagreed with this position, pointing it out that; atheistic values go beyond the mere defense of atheists’ liberty….

Now, I strongly object to the words “Yemisi Ilesanmi COMPLAINED”, I recollect us having a discussion around this issue, we all had our opinions on whether it should be called a manifesto or a mission statement, it was not a complaint, it was an expression of opinions.

Also, I have once again being gravely misrepresented because at no point did I say “Nigerian Atheists Organization should have a singular focus of fighting for atheists’ rights in Nigeria rather than all encompassing rights activism”.

I am known for my human rights activism which is all encompassing and include workers rights, lesbians, gay, bisexuals, transsexual rights (LGBT), sex workers rights campaigns , gender and youth issues. I basically try to include all progressive organisations in my various campaigns for human rights, so why should I be wrongly quoted as saying “Nigerian Atheists Organization should have a singular focus of fighting for atheists’ rights in Nigeria rather than all encompassing rights activism”.

What are atheists’ rights? Are these “atheists’ rights” divorced from major fundamental human rights like FREEDOM OF RELIGION that are guaranteed in Nigerian constitution and various international laws that Nigeria is a signatory to?

Seeing that this minutes flagrantly misrepresent all that I stand for and blatantly misquote me, I am demanding that the minutes be recalled from wherever it has been sent to and amended to reflect my true contributions. I would hate to have to post on every website page this minutes appears on, a correction of what I allegedly said and please I do not like to be so misrepresented and would want this corrected as soon as possible.

Also, I am using this opportunity to formally tender my resignation of the post of Director of the group. It is sad that it has to come to this junction again. I recollect that I protested at the meeting that I did not want to be made a director especially following the way I was appointed director without any consultation with me.

I only read about my being a director of Nigerian Atheists group on a post made by Hotem Dajenid in conjunction with Kunle Ogunyemi on my facebook page. I did speak to kunle Ogunyemi to register my thought that I should at least have been consulted before such a decision was made on my behalf and also made public, however, I was told by Kunle Ogunyemi that I should infact consider myself lucky to have the position because there were others who would gladly love to have it.

It was at this junction that I made it clear that, it was not my business to speculate about what others would gladly want or not, but the important thing is how I feel about not been consulted before my name was publicly posted in relation to an official position I was not aware of. I guessed this did not go down well with Kunle Ogunyemi as he misinterpreted my protest more as a sign of egoism rather than the real issue of non consultation.

I brought up this issue at the meeting in Abuja where I made it clear that I did not feel like taking up the post but was prevailed upon by ALL the other members present at the meeting to accept the position of Director of Nigerian Atheists group, which I did on the condition that another person be nominated as a Co-Director, at which point Dr Tunde Arogundade was elected a Co-Director.

I did have some disagreements with Kunle ogunyemi on what the mission of the Nigeria Atheists group was supposed to be but it was all aired during the meeting and everybody contributed their views. However, this Meeting minutes has been written as if I was a lone dissident complaining about everything at that meeting. We all did not agree, I wonder why I had to be misquoted and the fact that I disagreed with some of the points was made a subject matter everywhere my name appeared in the body of the meeting’s minutes. I was not the only one who disagreed with some issues at the meeting, why was “Yemisi Ilesanmi complained”, “Yemisi Ilesanmi disagreed with Kunle Ogunyemi” the main points wherever my name appeared in the minutes of the meeting?

Also, is a public minutes of a meeting not supposed to be about what was unanimously agreed upon and general conclusion reached rather than who agreed or disagreed on issues?

I hope this long but much needed explanation would help clear the air. I do wish the group success, but I can no longer associate with it. I would however appreciate if the meeting minutes where I was misquoted was withdrawn and proper amendment made. Thank you.

–Nigerian Atheists Group: Genesis and Revelation of its Patriarchal Tendencies!

–ANALYSIS OF COMMENTS MADE BY TWO FOUNDING MEMBERS OF THE GROUP ‘NIGERIAN ATHEISTS’.

—Nigerian Atheists Group: A story of Bigotry, Sexism and Patriarchy!

I, YEMISI ILESANMI HEREBY STATE THAT THE MINUTES OF THE MEETING CONTAINS INACCURACIES AND I DO NOT WISH TO BE ASSOCIATED IN ANY WAY WITH THE GROUP ‘NIGERIAN ATHEISTS’. THANK YOU. 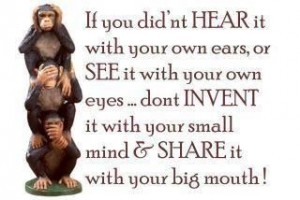 Nigerian Atheists Group: Genesis and Revelation of its Patriarchal Tendencies! » « Love Not Hate: International Day Against Homophobia, Biphobia and Transphobia.