I’m not sure why, but psychopaths sure do like to brag, don’t they?

Back in 2020, [stderr] I was asking “what happened to Abu Zubayda’s eye?” Everyone – media and torture agencies – had been dancing around that question: the media wouldn’t ask and the CIA wouldn’t say. Since the media wasn’t asking, we had no good way of learning what happened, unless/until someone took a book deal to pen a confession. It’s part of the American media landscape; in fact we’re just now being treated to another great example, in which journalists who saw the planned White House coup evolving well before it happened kept their mouths shut because they wanted to leave their jobs, write “tell all” books, and make a pile of money. [dailykos] Just keep all of this in mind in case you wake up some morning and pour a cup of coffee, thinking, “what a lovely day, I’m going to read the New York Times so I can catch up with the reality flowing around me.” It’s a heavily redacted reality.

Because the US is bizarro-land and we love to protect war criminals, one of the doctors (a Canadian, I believe) who implemented the torture program and made tens of millions doing so, also wrote a “tell all” book: 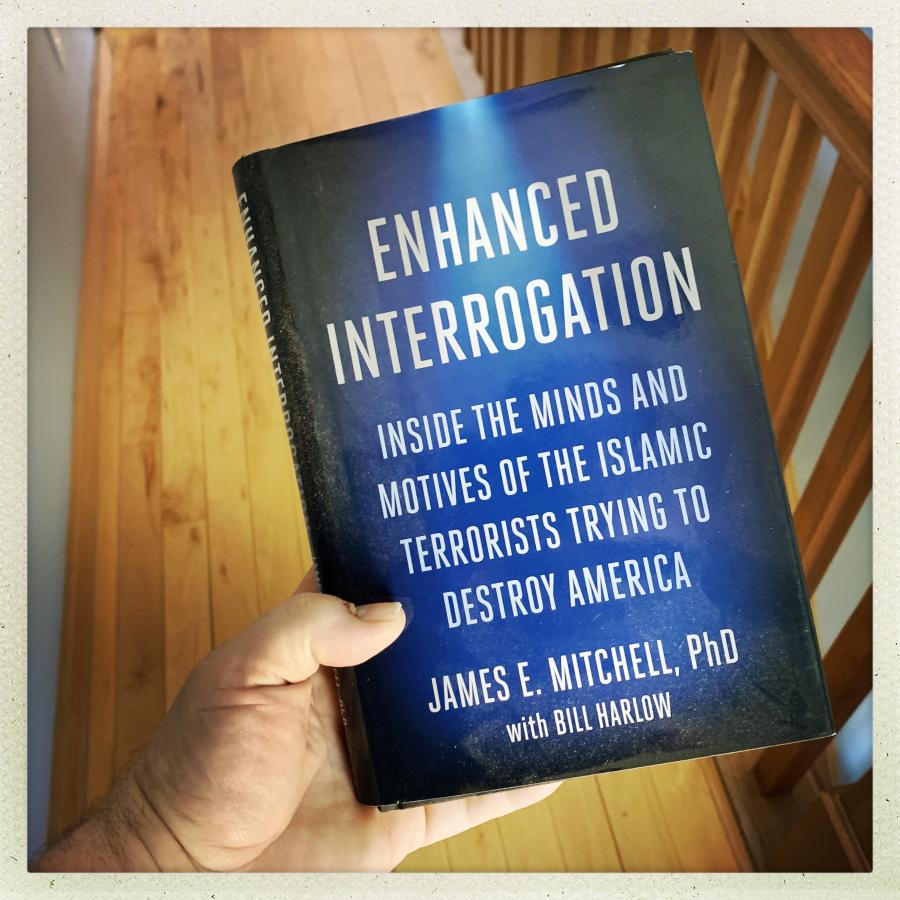 Of course I have a copy. In the book, Mitchell confesses to war crimes and conspiracy to commit torture – which is a capital offense under US law. But we have to move on from that sort of thing, we’ve got Russians to complain about, over there, look! Squirrel! 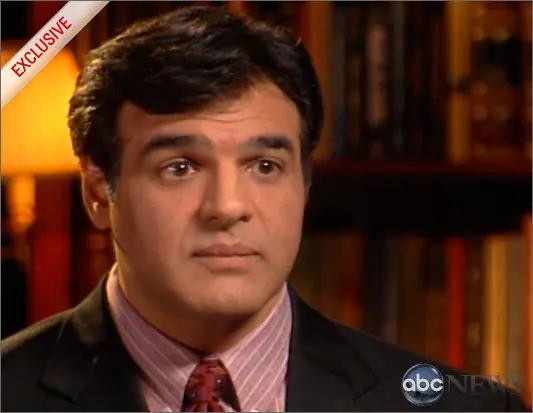 That’s all ground I’ve covered before to some degree or another. A lot of our information about what supposedly happens comes from “whistleblower” John Kiriakou, who sort of comes out of the whole thing looking like a “good guy” because he sort of blew a sort of whistle and kind of got in trouble with it to the point where it pushed back/delayed his book deal – or something like that.

Imagine my surprise when Kiriakou penned a confession: [rs]

I witnessed it all, and after 20 years in GTMO without charge, his story remains our country’s greatest shame.

That’s all true, such as it is, but witnessing it all and telling all the details are two different things. Kiriakou also took pains to make sure he didn’t throw anyone under the bus, until Mitchell – in his book – threw CIA interrogators under the bus and guess who one of those CIA interrogators was? See, these are all highly moral people, whose deeply-held principles are coming to the fore 20 years after it’s too late to say anything. Note: I’m not saying that coming forward sooner would have changed anything, but rather that these criminals taking such a long time to come forward is indicative of a cover-up, not that they made an important ethical decision. In case you don’t buy my argument, there, ask yourself where Kiriakou was when Gina Haspel was being confirmed as CIA director. I don’t know where he was, and neither did the media (or, they did, but they had been asked to not bring the matter up).

The U.S. Supreme Court on Wednesday heard arguments from attorneys for Abu Zubaydah, a Guantanamo prisoner once mistakenly thought to be the third-ranking leader in al-Qaeda, about whether their client would be allowed to depose two CIA contract psychologists who devised and carried out the Agency’s torture program and participated personally in Abu Zubaydah’s torture.

Abu Zubaydah wants information from James Mitchell and Bruce Jessen about his time in a secret CIA prison, as well as information about the torture that Mitchell and Jessen subjected him to. A federal appeals court had earlier ruled in Abu Zubaydah’s favor, but the CIA appealed to the Supreme Court, saying that “national security” would be jeopardized if details of Abu Zubaydah’s torment were to be made public. That’s what they always say.

I’m a bit puzzled how Mitchell’s testimony would change anything, since he already confessed to war crimes (as well as medical malpractice and felony torture) in his book. This is what comes from having judges that don’t read books. Why didn’t someone say “can we just use what Mitchell wrote in his book?” and “if there are additional secrets the CIA wants to protect, why not subtract from them the disclosures in Mitchell’s book?” Here’s the stupid part: the plaintiff (Zubaydah) also knows what torture he was subjected to – the CIA’s argument about secret national security is specifically about what testimony Zubaydah is not going to be allowed to make about his own experience. Given that he’s not guilty of anything – it turns out the CIA was wrong when they thought Zubaydah was an AQ big shot – we’ve got a situation where an organization that committed multiple felonies under colour of duty is trying to suppress evidence of their crimes and it’s completely obvious that that’s what’s going on.

But then it gets good:

For the record, I led the raid that resulted in Abu Zubaydah’s capture on the night of March 22, 2002. I was serving as the CIA’s chief of counterterrorism operations in Pakistan, and those of us in the field were told that Abu Zubaydah had to be taken alive. He was supposed to have been a senior al-Qaeda operative, was “probably” involved in the 9/11 attacks, and constituted a “clear and present danger” to the United States. In the end, none of that turned out to be true.

See what Kiriakou did there? He led the raid but “he was supposed to be…” by whom, exactly? Kiriakou was the leader but he just accepted some obviously wrong intelligence from his own organization, and went forth and truly fucked Abu Zubaydah up. In the past, Kiriakou’s story about Abu Zubaydah’s capture was that he was pretty badly shot up by someone while he was being captured and … then we patched him up and someone tortured him.

Nonetheless, our mission was successful, and I sat with him for the first 56 hours of his captivity. He was severely wounded during the capture; a Pakistani policeman had shot him in the thigh, the groin, and the stomach with an AK-47. A CIA plane finally arrived to take him to a secret prison, one of several that he and at least a dozen other al-Qaeda suspects were taken to and in which they were tortured before eventually being dispatched to Guantanamo, where they have remained for more than 15 years.

I’m not really in “the media” but I’ve got to say I wouldn’t publish a fucking thing from Kiriakou unless he answered my questions, and my second question after “what happened to Abu Zubaydah’s eye” would be “where was the secret prison?” because secret prisons are a big no-no when you’re renting out space to the CIA to make a torture facility. See, Kiriakou is still trying to skate for being a whistleblower except he’s not: he’s still providing cover for the conspiracy. Oh, sure, if he disclosed those secrets he’d wind up in jail, but that’s where heroes seem to wind up these days, not signing book deals.

Now check this out:

One of the things that I noticed immediately upon Abu Zubaydah’s capture was that one of his eyes was a very pale blue, while the other was dark chestnut in color. It was clear that he was blind in the blue eye and that it had been injured traumatically. We learned later that shrapnel had damaged Abu Zubaydah’s eye during the Soviet occupation of Afghanistan, when he was fighting as one of the U.S.-backed “mujahedin.” The blind eye never bothered him. He certainly never complained about it. But one day, Abu Zubaydah was given a sedative and taken into surgery without him knowing what was even happening. A few hours later, he awoke and discovered that his eye had been removed without his knowledge or consent. There’s a legal definition for such an action. It’s called a “crime against humanity.”

So there is the long-awaited answer to that question: someone just crime against humanity’d and, uh, whoever published that letter by Kiriakou didn’t think to ask:

This makes me ponder about epistemology. Can I now say “my question about ‘what happened to Abu Zubaydah’s eye?’ has been answered?” or is it partially answered or do I still not have an answer at all? Obviously they weren’t going to just let his eye rot in his head (well, this is CIA torture so maybe they would have…) but they could have been arsed to present him with a consent form for the eye surgery, then taken him off to be waterboarded. Uh, fuck, I dunno. But that’s the strange sort of tortured behavior organizations have to get into when they start torturing people – the easy way to deal with them is not to torture people! Then, they could give Abu Zubaydah a few million dollars as an apology, and a book deal, and send him forth to tell everyone about how respectfully he was treated in American custody. Instead, it’s pretty clear that Abu Zubaydah is going to be kept in Gitmo until he dies there, rather than embarrass the CIA.

I’m a believer in the rule of law.

Trolling the Stupid? » « Go Where It’s At