Roberta and Ken Williams say they are working on a game. [engadget] 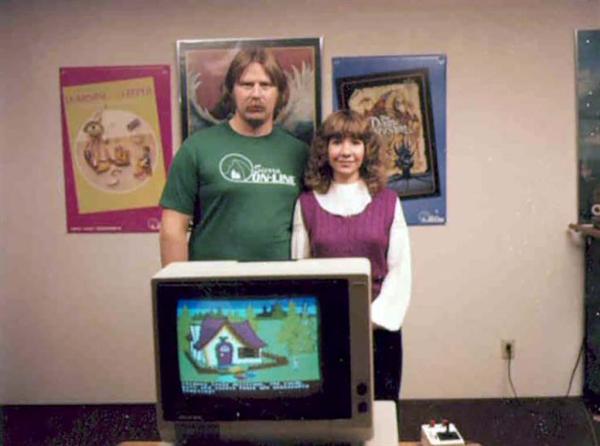 Sierra Games Celebrating the release of King’s Quest, 1991 [looks like an Apple II]

I don’t actually have a lot of hope for it, but we’re talking about some undeniably talented people. They’re trying to reboot the Colossal Cave franchise, which Roberta first started scripting in the 1970s. Ken apparently has been teaching himself Unity [a meta-programming development environment for multi-platform games]

This represents a sort of challenge to my oft-spoken belief that gameplay is what matters, and all the graphical flash and blink is secondary. What if they produce a game I don’t like because it’s not state of the art? Is there even a ‘state of the art’? 2009’s Brutal Legend was a hoot and I loved it in spite of its deliberately dated look. Maybe gameplay is what matters, but what if it’s not?

Unrelated but related: there’s going to be a 3rd Subnautica, which is fine with me. They can turn that crank for a long time so long as it’s got the same kind of “gee wow” exploration and discovery.

Unrelated but related: there’s going to be an endless sequence of Horizon Zero Dawn bang-ons. They may even be good. But it looks like the gaming industry’s fondness of crank-turning is going to take over and give us “more of the same” until we puke. I just contradicted my sentiments above. This is frustrating: I love both Subnautica and Horizon Zero Dawn but I guess I’m more worried about a triple-A-rated game turning into a series juggernaut, than a smaller game. Am I saying “money changes everything?”

I beat Rimworld for the first time the other day, having figured out a defensive strategy that works very well. There are so many mods and so many “how to”s I don’t think it’s probably worth getting into that topic. But, what a great game.

Go Where It’s At » « Well, I Feel Protected and Served