Monday, I drove down to Baltimore to disassemble and re-wire my parents’ entertainment system. I swapped out a first-generation DVD player for a new little Sony blu-ray player with an HDMI connector, and that made the remaining problem one of plugging a couple of wires into the back of the flat panel. I was supposed to get there around lunchtime but I was an hour late because of America.

It took me a while to figure out what I was seeing. The traffic on I-70 had slowed down to 40mph or so, and one lane was packed solid with … oh, trucks.

Taking pictures is tough while driving, so I didn’t get all the shots I wanted. There were a few embarrassing ones that were captivating. One truck had a lengthy screed about the evil Dr Fauci, written sloppily down the side in decreasing-size letters. If you were a prop wrangler for a movie, and were asked to dress up a truck “as though it was driven by someone whose mind had begun to rot from the space-plague” that would have been it. I’ll say in the interest of fairness that the evil Dr Fauci truck was unique. Most of them sported ‘merican flags, Trump flags, and a few confederate battle flags. There was one truck flying a “Proud Boys” flag and I wanted to roll the window down and ask the guy how he felt about the fact that their leader was on the FBI payroll. But those trucks are awfully big and the drivers are manifestly stupid. 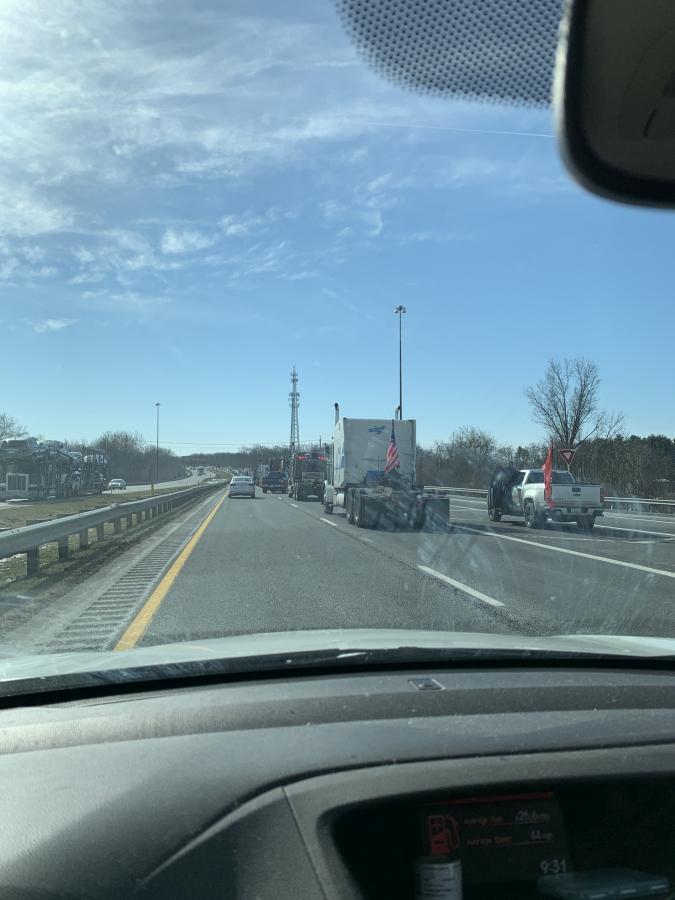 There were at least two trucks that I passed which had stuff scrawled on them to the effect that Joe Biden had better lower gas prices. That’s exactly the sentiment I’d expect from someone with an Ohio license plate on their truck, who was basically idling it in traffic to interfere with other drivers. I have to admit that I thought, repeatedly, how unfair it was that the Ukrainians were getting all the NLAWs and maybe we could use a few of them in the US, too. 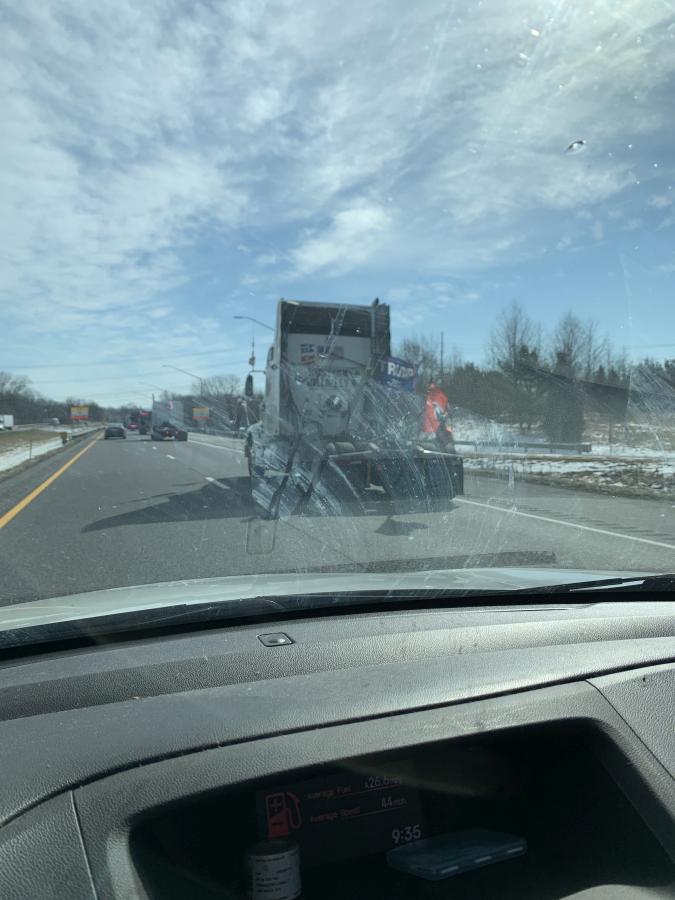 That one was flying a Trump flag and a Tennessee state flag. A state that Trump doubtless thought of as a shithole full of shitty, gullible people. It’s sad to see people used and thrown away like kleenex, but the kleenex doesn’t sit around afterwards pining over its life’s purpose. 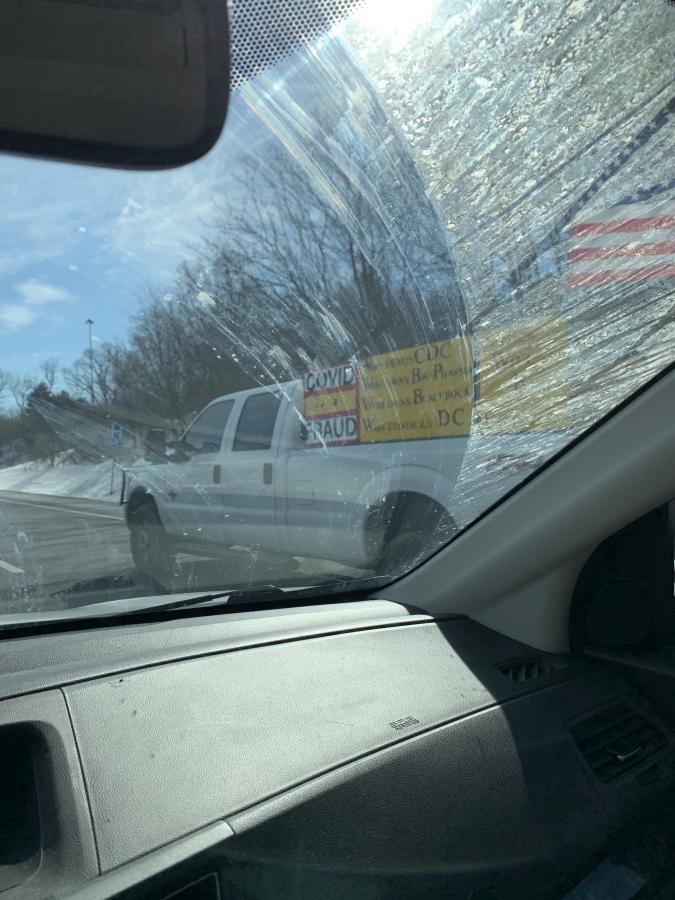 “COVID IS A FRAUD” that one says. And some other stuff. I was talking to my mechanic yesterday and he mentioned that there was a nice newish Chevy pickup truck for sale – both its owners having died of COVID recently. I don’t know if stupid germs can survive in a truck for long, but I wasn’t interested.

That was all in the context that I was being told “the Tahoe is worn out” – that’s my beater and hauler truck, also my truck that can get through deepish snow. I’m going to need another truck. I had hoped to get another year out of the Tahoe but that’s not fate’s choice. They had it up on the lift and I could observe the massive rusting under there. Several holes in the frame, the mountings for the shock absorbers had given up and vanished into somewhere, and the supports for the gas tank were all gone but one. No way that’s going to pass inspection.

All that’s on my mind because that convoy consisted of a lot of huge ‘merican trucks. A lot of dual rear wheel setups (you need dual rear wheels when you’re towing a load of grievances to Washington) and big engines. I’m generally suspicious of anyone who drives a pickup truck that is not falling apart and covered with mud; some of these huge work-trucks cost as much as a small house.

I guess the whole traffic jam is a metaphor about ‘merican priorities.

My mind chewed on the problem of “our guy your guy”-ism – the false assumption that so many seem to jump to which is: “you hate Trump therefore you must like Biden.” They don’t seem to understand that a person can hate both Trump and Biden at the same time. In fact, it doesn’t take much incremental effort; my hate is flawless, fluid, and ferocious. But I’m not going to do anything about it, because all of the things I can think I might want to do are illegal, and the legal ones are stupid. Welcome to political disempowerment.

I actually did come up with an idea, which [let me say this clearly] I am not going to do. Namely, to start a direct action group aimed at attacking coal and gas-fired power generation stations using kinetic methods. Stuff like drones trailing heavy carbon fiber ropes to cut wires, high caliber shots fired at transformer cooling tanks, molotov cocktail drones aimed at coal piles – things like that. The purpose would have to be stated clearly: “we aren’t trying to hurt anyone, we’re just trying to force you to spend hundreds of millions of dollars on physical security, which will adjust the economics of fossil fuel plants even further into the red zone.” The government has demonstrated repeatedly that they’ll always cough up a Joe Manchin or a Nancy Pelosi to kick the can further down the road; the time for direct action has probably already passed. But, at what point can we say honestly that political processes have failed us and that it’s our right to start hunting for methods that cannot be bargained away or gerrymandered?

The other thing I kept thinking is that the convoy represents a great resource of stupidity. There was even one truck that had a “no human trafficking, no pedophiles” sign on it. Maybe these people need to be introduced to the idea that fossil fuel-produced electricity has toxic electrons that will make you turn into a glitter-throwing liberal drag queen if you don’t get out there and knock down some power lines. The problem is that, as a ‘merican, we’ve all got it really great – asking us to stop doing the stupid things we’re doing is like asking Russia “now that you’ve gone and built a great big army, don’t do anything with it.” We’re all stuck just asking. The political class that run the world for the financiers have figured out how to arrange it so that popular opinion means nothing whatsoever – they can ignore us with impunity and if we get out of line they’ve got cops standing by to pound us. They’ve thought this through already and they’ve done this kind of thing before. But, if we could point the Qanon dipshits at the infrastructure and the cops, then we could just sit back and watch both sides bleed a little bit. Which thought made me realize that: that is not going to happen. Why not? Because the cammo creeps and Qanoners, bikers for Trump, and state police, are all just pretending to care. Actually doing anything is not the point, it’s being able to say “I did something!” Yeah, you got in your truck and protested high gas prices by driving around. Yeah, you marched in a rally, organized by organizers who know it’s not going to do anything, watched over by cops who know it’s not going to do anything, through the heart of a city that has never done the right thing.

So I found myself driving slowly, getting later for my lunch appointment, alternating between sympathy and hatred for the stupid gomers in their trucks. It was not a good feeling. I was part of the convoy.

I only saw one truck that had its diesel mix jiggered to blow a lot of black smoke. It made me wonder whether that vast collection of idling diesel engines represented the “green” fringe of the lunatic spear-point. We’re so fucked, right now, that it’s impossible to tell what direction it’s coming from.