The right of a woman to an abortion did not depend on the Supreme Court decision in Roe v. Wade. It was won before that decision, all over the country, by grassroots agitation that forced states to recognize the right. If the American people, who by a great majority favor that right, insist on it, act on it, no Supreme Court decision can take it away.

The rights of working people, of women, of black people have not depended on decisions of the courts. Like the other branches of the political system, the courts have recognized these rights only after citizens have engaged in direct action powerful enough to win these rights for themselves.
– Howard Zinn [zinn]

[The whole article by Zinn, referenced above, is worth a read]

I was actually searching for a quote from Zinn that I have referenced before, from his talk entitled “The Southern Influence on American Politics” wherein he semi-gently mocks the supreme court as being a dysfunctional apparatus beholden to the political influence of the minority. Sound familiar? [stderr]

We have some great statesmen in this country, we have a good congress, we have a fine president, a magnificent supreme court, a wonderful set of laws, a great constitution, a magnificent heritage and all is being spoiled by a few miserable, evil southerners.

Zinn was being sarcastic, of course, he didn’t actually believe that it was just a few miserable, evil, southerners. His historical vision was clear enough that he saw the entire system as corrupt, created in corruption by corrupt political hacks, to carry forward corruption and political hackery. 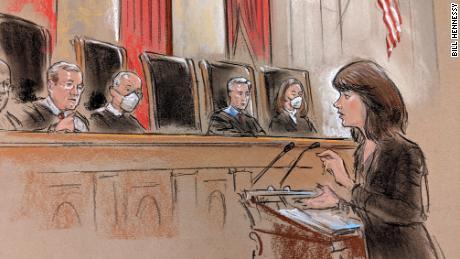 I discovered the other day [cnn] that the supreme court has been doing a weird sort of mixed “work from home” and “sit at the bench” because … Neil Gorsuch is such a hothouse flower he can’t handle wearing a mask, so he doesn’t. Given the recent deplorable history of republican partisan hacks in congress coming in and infecting their co-workers and staff by going unmasked or unvaccinated, Gorsuch is demonstrating that he, too, is a partisan hack. You know, exactly the thing that people are complaining about. The republicans are saying “Oh, no the supreme court is not a partisan organization!” while jumping backwards through their own assholes to pack the bench, and the democrats are wringing their hands and saying, “oh gosh we shouldn’t have trusted Mitch McConnell’s bipartisanship!”

The real issue is: what kind of ignorant walking dildo do we have on the supreme court? These are people who are supposed to be thoughtful and judicious – perhaps, even, judges – but no. I can’t determine if Gorsuch’s motives are:
A) He’s a jerk
B) He wants to fuck with his co-workers
C) He has no respect for his own office
D) He’s an ignorant anti-masker (and therefore not qualified to shine shoes outside of the courthouse)
E) He is specifically trying to annoy Sonia Sotomayor
F) He feels his looks are so resplendently beautiful that everyone must be able to enjoy the sight of him
G) All of the above

If you were looking for a metaphor or litmus test or whatever hyperbole you prefer for how little respect the supreme court has for itself and the nation, you need look no farther. It’s a symphony of privilege.