I don’t know any economists. But, I assume that there are real economists out there that are trying to do science and understand finance and markets, etc. And, I assume that they are constantly in a state of forehead-pounding rage over “popular economics” and the vast amount of bullshit that is spouted in the name of “economics.”

Lately, I’ve been horrified at what political hacks have done with Marx and Hayek. Particularly Hayek, though I admit I am not knowledgeable enough about his work to determine to my own satisfaction whether he was sincere, or a “useful idiot” – no matter how you slice it, though, his “road to serfdom” argument has carried a lot of water for libertarians and establishment laissez-faire capitalists. I have to admit a degree of ignorance about economics because it’s tough slogging and when you start digging into it, you encounter people like Milton Friedman, who will make you want to drive your fist through your computer, to make the smug hypocrisy stop. Anyhow, I tend to dismiss the leading lights of the field as pseudo-scientists, the same way I do early psychologists, and for the same reason: lots of untested theorizing and the ever-present excuse of “market failure” when things don’t work as expected. I admit I’m biased. 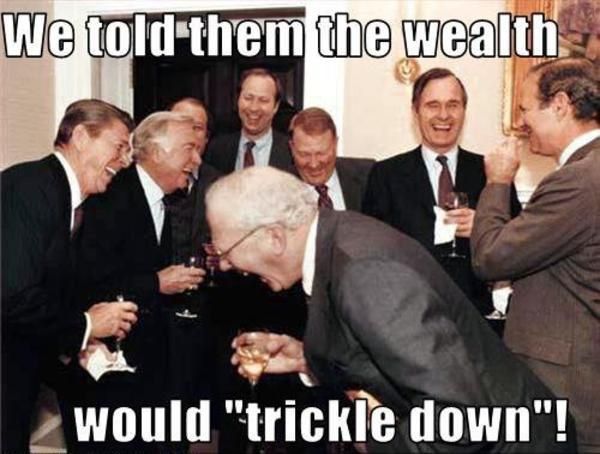 So, I was pleasantly surprised to see that there are economists that actually analyze real world results and try to apply measurement to predictions from theories, like scientists are supposed to do. [wapo]

The researchers started by constructing a composite measure of “tax cuts on the rich” encompassing a variety of taxes, including the top tax rate on personal income, the estate tax and the tax on capital gains. Because these taxes are levied predominantly on the wealthiest members of society, the wealthy stand to gain the most when they are cut.

While previous studies on the effects of taxing the rich have tended to focus on just one type of tax, “our measure combines all of these important taxes on the rich into one indicator,” Hope and Limberg said in an email. “This provides a more complete picture of taxes on the rich, but it also allows for comparisons across countries and over time.”

Using this measure, they set out to identify “major” tax cuts on the rich in 18 wealthy nations from 1965 to 2015. In the United States, that included the Reagan-era tax cuts of 1981 and 1986, which dramatically reduced the top income tax rate from 70 percent to 28 percent after fully taking effect.

They then traced what happened to those nations economies in the five years after the cuts were implemented. They focused particularly on income inequality, economic growth as measured by gross domestic product, and the unemployment rate. They aggregated those trends across countries to capture the broadest possible picture of the tax cuts’ effects. 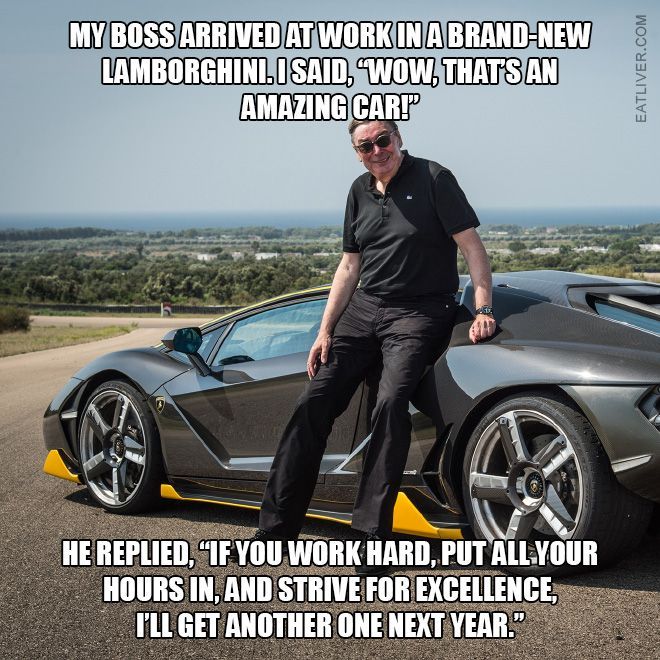 This is the kind of thing I expect from economists: there’s a theory, here are some measurements, and now there are some conclusions. The theory is “trickle down economics” and the measurement is: it makes the rich richer. A few years ago, Thomas Piketty was getting great air-play for his book Capital and Ideology [wc] which argues (I hope I have this right!) that inequality compounds itself once it is present in an economy, i.e.: the rich get richer once they are rich, because that’s what “being rich” means. I don’t think that’s a radical idea, but it seems to have shocked some Americans, while they were voting in a self-professed billionaire con-man who enacted a huge tax-cut for the wealthy and corporations. The reasoning was the same as republicans have always offered: “trust us, a bit of worsening inequality will do you good, because you can get a shit job waxing rich guys’ laborghinis, if they have more lamborghinis.” Or something like that. Meanwhile, they have done whatever they could possibly do to maintain a below-minimum-wage workforce that has no chance of upward mobility, because that allegedly keeps the economy working. Actually, it keeps the inequality working, and – again paraphrasing Piketty perhaps wrongly – inequality is the economy. At a certain point, the wealthy will be able to argue that taxing them will destroy the economy because, see, they can leave to their mansions in Galt’s Gulch, and play golf forever.

First, the tax cuts succeeded at putting more money in the pockets of the rich. The share of national income flowing to the top 1 percent increased by about 0.8 percentage points. (For comparison, in the United States the bottom 10 percent of earners capture only 1.8 percent of the country’s income).

But they had no effect on economic growth or employment. Though those quantities fluctuated slightly after the major tax cuts that were studied, the effect was statistically indistinguishable from zero. The “rocket fuel” so often promised by supporters of these tax cuts? It fizzles out time and time again.

“In the last decade, especially with the pioneering work of Thomas Piketty and his co-authors, there has been a growing consensus that tax cuts for the rich lead to higher income inequality,” Hope and Limberg said. Piketty, a French economist, wrote “Capital in the Twenty-First Century,” a book on the growth of inequality in rich nations.

I guess it’s good that there’s some fact-based analysis backing up Piketty. Now, we will see some public policy changes, for sure.

Given the evidence, why are such targeted tax cuts perennially popular among policymakers, especially Republicans? The authors point to one major reason – the power of wealthy individuals and corporations to set policy agendas through lobbying and campaign contributions.

Wait, are they saying that giving the rich control of the economy means that “the rich get richer” will be the whole of the law? I’m pretty sure nobody saw that coming. Except for Marx, and every labor activist that ever watched US capitalists export low-paying jobs overseas while dodging taxes on their profits, then calling for “bring back American jobs!” which they’d do if only they had another yummy slice of lemon chiffon tax cut.

As another famous philosopher of economics, Dr Pink Floyd said:

Money
Well, get back
I’m all right Jack
Keep your hands off of my stack
Money
It’s a hit
Don’t give me that do goody good bullshit
I’m in the high-fidelity first class traveling set
I think I need a Lear jet

The endless trend toward tax cuts for the rich has been across the board, and, unsurprisingly, the COVID pandemic resulted in: the rich got richer and the poor got poorer. 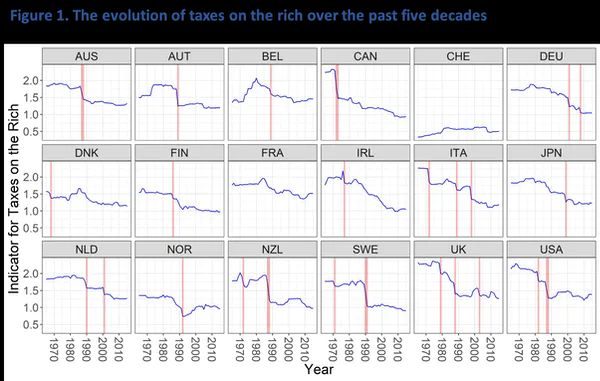 Piketty and his collaborators have created a database tracking inequality around the world. It tells us: inequality exists and tax cuts for the rich aren’t helping.

[wid] has some interesting charts that bolster these conclusions: 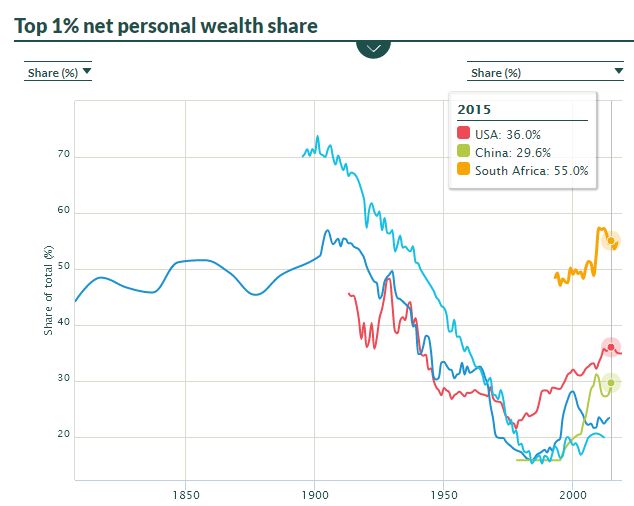 Wow, look at China and Russia go! It’s as if they’ve become oligarchies controlled by elites in their own economic interest, or something. But South Africa’s the big outlier: it appears that when the white people gave up apartheid, they still kept control of the economy. I bet that they’re not big fans of “tax the rich” there, either.

Next up: radical freethinking economists discover water is wet.

So, I’m convinced that wealth and power (because the two are semi-interchangeable forms of the same thing) are self-perpetuating and will tend to increase by their nature. Is there any history of a place in the world that has reset successfully and re-balanced? On the Piketty chart, it appears that France and England have both collapsed down but both of those countries were massive colonial empires that failed. Is it the failure of imperialism that resulted in economic adjustment? I know that France’s level of inequality under Louis XIV became mind-bendingly huge: something like 75% of all the land in France belonged to the crown, and 15% to the Catholic Church – everyone else got to squabble over the rest and you can see how that worked out. The aristocrats of France did OK, generally, only about 2,000 were actually beheaded by guillotine, but the main impact to them was they were dispossesed of their lands and fortunes. WWI bankrupted England – something about their mad strategy of building a navy that was twice the size of everyone else’s.