I’m sure that racists would come up for other ‘reasons’ for their hatred (perhaps they’d blame it on hiphop) but, unfortunately, for now, we’re stuck with pseudoscience.

It’s really depressing if you study the history of how Darwin’s great idea was immediately grabbed and warped into social darwinism (racism), and scientific racism (racism) with a sprinkling of pop psychology and garbage social science thrown in, to create a witches’ brew of wrongness that is still with us, to this day: [politico]

“You’ve never seen him sick. You’ve never seen him without energy,” Brenden Dilley, a self-described “MAGA life coach,” told his viewers on his radio show Friday. “[He’s] not walking around with weak-ass, p—- f—— genetics. He ain’t got those liberal genes. These are, like, god-tier genetics; top 1-percentile genetics.”

That’s a nearly perfect summary of the stupidity and ignorance of scientific racism. I’m not going to try, but I’m pretty sure one could write a book, or a goodly thick pamphlet, just digging into what’s wrong about that chucklefuck’s stated beliefs. 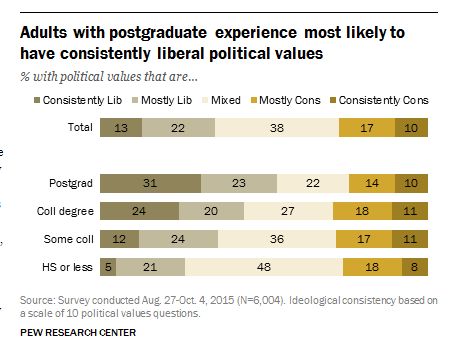 Never mind the first part, which is simply not true: we’ve seen plenty of Trump slurring like a drunk, and walk-wobbling like the old golf-playing fart that he is. “Liberal Genes”? What? Since there are plenty of examples of right-wing assholes having kids that turn out to be liberal, please explain to me again how liberalism is genetically determined or even influenced? Even if it were [which, I emphasize, it’s not] social factors appear to influence one’s politics more than genetics do: [pew] the better your education, the more likely you are to be liberal. Flip that around and it says that if you’re conservative, you’re less-likely to be well-educated, i.e.: you’re more likely to be an ignorant chucklefuck. [dilley]

Upon graduating from high school, Brenden went on to become a highly successful personal trainer, receiving his certification through the National Academy of Sports Medicine.

So, that puts him on that bottom bar of the Pew chart. Surprise, surprise.

As my dad used to say, “he chose his parents well.” In terms of learning how to be a corrupt, tax-dodging asswipe, that is. Is that nature, or nurture? If you look at Trump’s siblings, I think it ought to be obvious that (aside from a genetic predisposition for really bad combovers) there’s nothing outstanding about any of the Trumps. They’re just traditional american grifters. And, like grifters everywhere, they appeal to the lower end of the educational spectrum [pace James Randi’s incorrect dictum that it’s easiest to fool scientists – which is an odd thing for him to say given that he was friends with Richard Feynman who supposedly was extremely good at seeing through Randi’s tricks]

That’s my favorite part: an appeal to the “gospel of wealth” which was actually an alternate explanation for wealth, namely “god wants me to be rich.” Remember: the folks who brought you the gospel of wealth were people like Andrew Carnegie and the other american robber barons – many of whom came over to the US poor and starving, then scrabbled their way over a heap of corpses to great wealth. If there was any genetic argument that they were special, somehow, they would have come to the US in great gold-covered ships full of silks and champagne because their forebears would have also been wealthy. No, Carnegie, Rockefeller, Morgan, Frick, Ford, were trying on the “gospel of wealth” in order to justify their vast fortunes as being something other than “luck and ruthlessness.” Capitalists have to justify their wealth because otherwise, you know, people might realize it’s not entirely theirs.

For one thing, it also displays a complete failure to understand what a “novel virus” means, and how viral immunity works. To me, it’s incredible that anyone can reach adulthood without gaining some basic understanding of bacteriology or virology – those are matters of life and death – now, rather obviously. The reason novel viruses are so interesting is because nobody has immunity to them; there’s no godlike DNA that carries immunity to something that humanity has minimal experience with.

It’s a tribute to american ignorance that we still have people who hold such retrograde, stupid, wrong ideas. Partly, I suppose that’s due to a load of ignorant christians who fight tooth and nail to keep evolution and science off of the curriculum – which has everything to do with preserving their power and nothing to do with education. After all, if they really had faith in their ideas, it would survive a bit of science, amirite? Nurture, not nature. I’m sure there’s nothing wrong with bootlicker Dilley’s DNA that a little studying couldn’t cure – instead he’s got to serve stereotypes like “dumb jock.” #SAD.

The Failing Journalism is Gullible » « Sunday Sermon: In Defense of Retaliation