Ant Log turned out very well indeed. It could have been better, but that’s how these things go.

In retrospect, I wish I had used a thinner section of wood, and made the edges more curved and less vertical; that would have had a better chance of bringing out the ant colony’s holes: 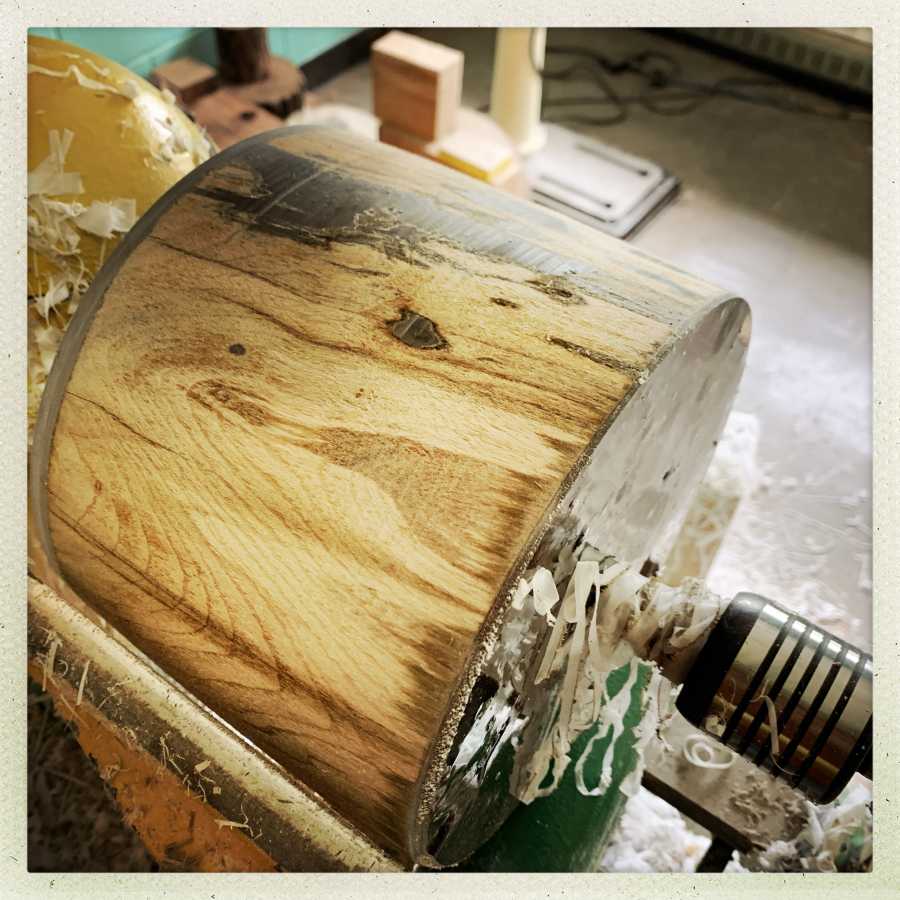 One nice thing about casting in resin using a bucket is that your piece comes out round already, and there’s a little dimple in the resin from where the bucket was injection formed. No trouble centering up the piece – just screw on a face-plate and put the center in the tailstock and go!

I mostly used my mega skew-chisel to shape the outside a bit and give it a bit of taper, then carved a mounting-point for the chuck, turned it around, and put a forstner bit in the tailstock to carve some of the insides out. 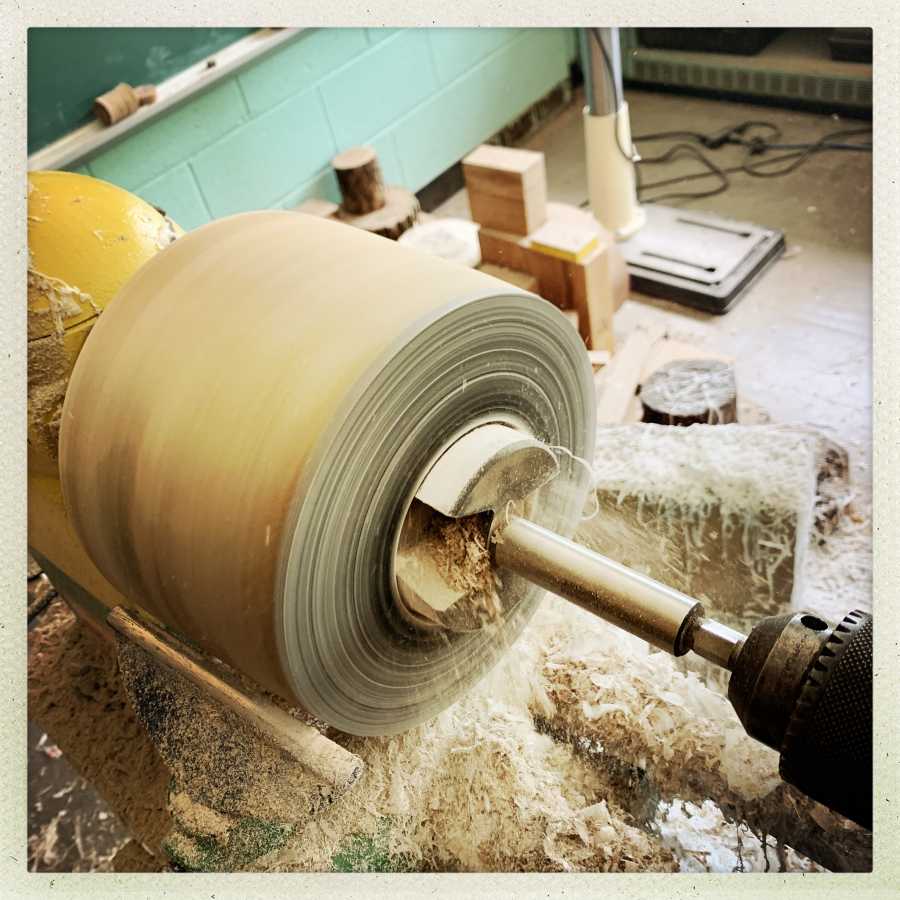 It’s pretty slow going, because you don’t want to burn the wood or the forstner bit, and it made me switch over to the carbide bar. The carbide bar turned out to be a lot faster, but it made a lot of mess.] 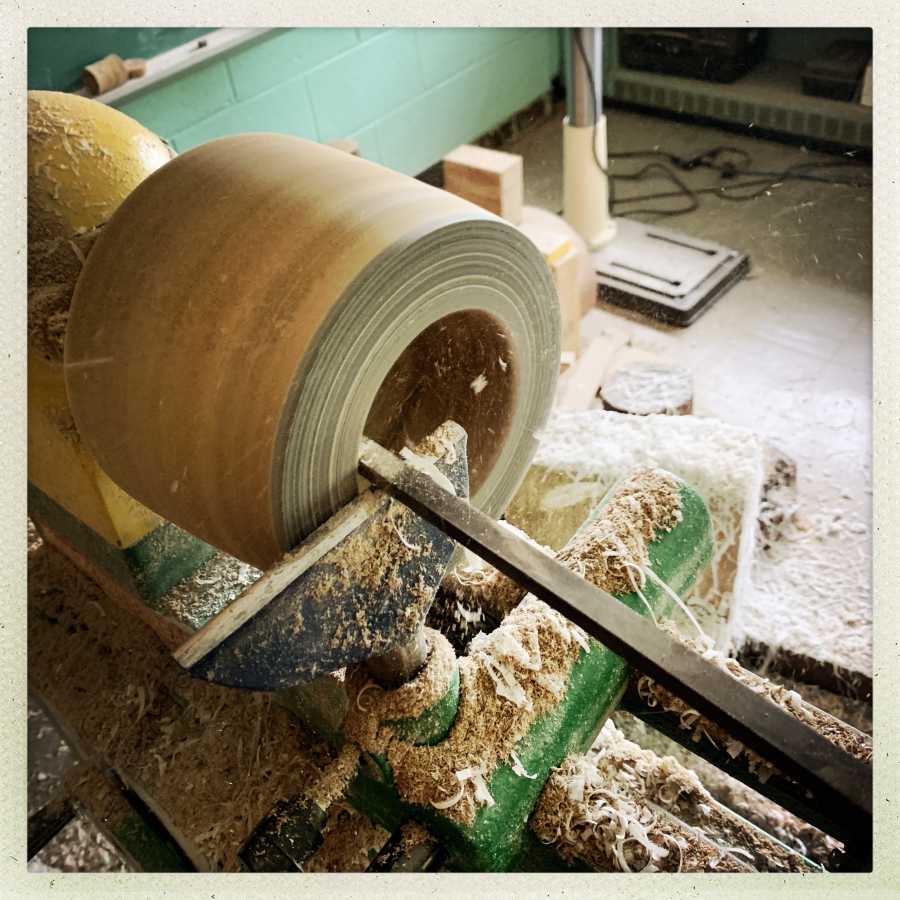 I felt a bit stupid carving out all the resin I had just laboriously injected but, whatever. The carbide bar really rips stuff up.

On youtube the other day I saw someone using a carbide bar with a kind of swan-neck and a base that was wide and thick; I guess that’d be less likely to try to turn in your hand, and the weight would dampen the vibration a bit. I may have to whip up a block of suminigashi and make myself one of those. My mega-chisels, with the huge long handles, work really well; they are very stable. 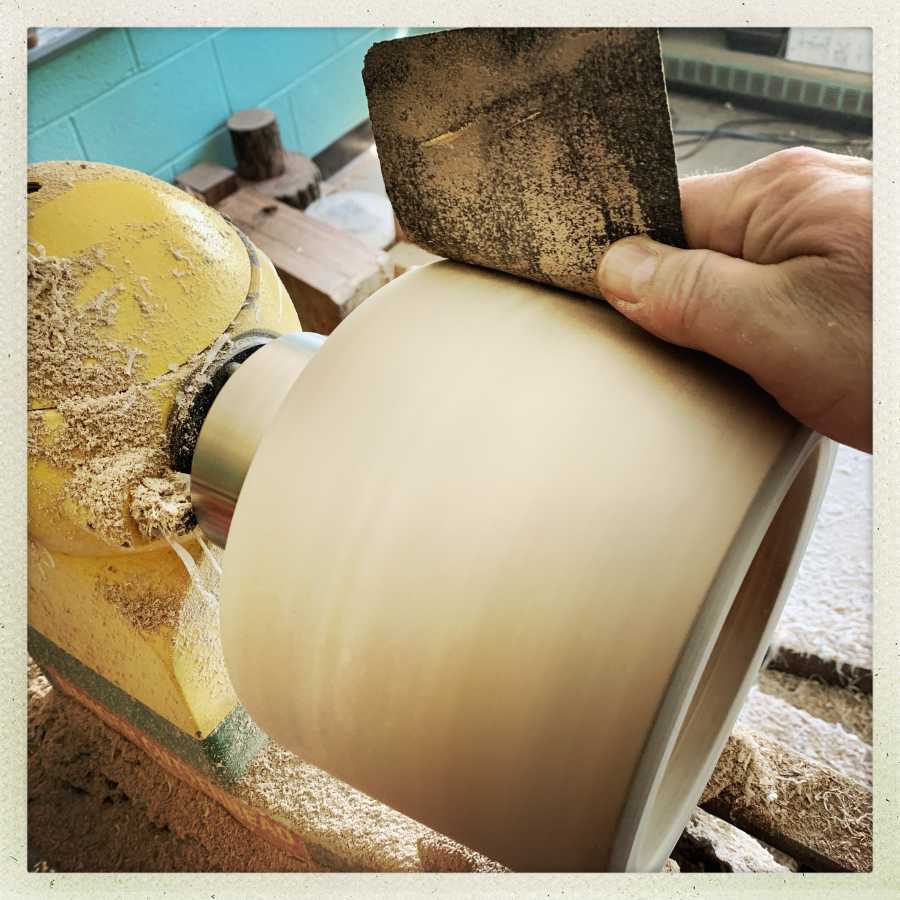 Obviously, you need to be careful not to ever hold the paper so that it can catch on the work-piece or your hand, and drag you around the lathe. That’s more of an issue on the interior: you can reach the inner edges pretty safely but putting your hand in the hole feels like putting it into the mouth of a bear. You do it carefully.

In fact, I was so skeeved by that part, that I decided to do some thinking and strategemizing instead of just going at it. A few minutes later, this is was working quite nicely. Because the drill is not sticky and doesn’t bend, it might tap against the edge but that’s about it. And, honestly, if something goes wrong and the drill gets thrown across the room, well, drills are cheap. Comparatively. 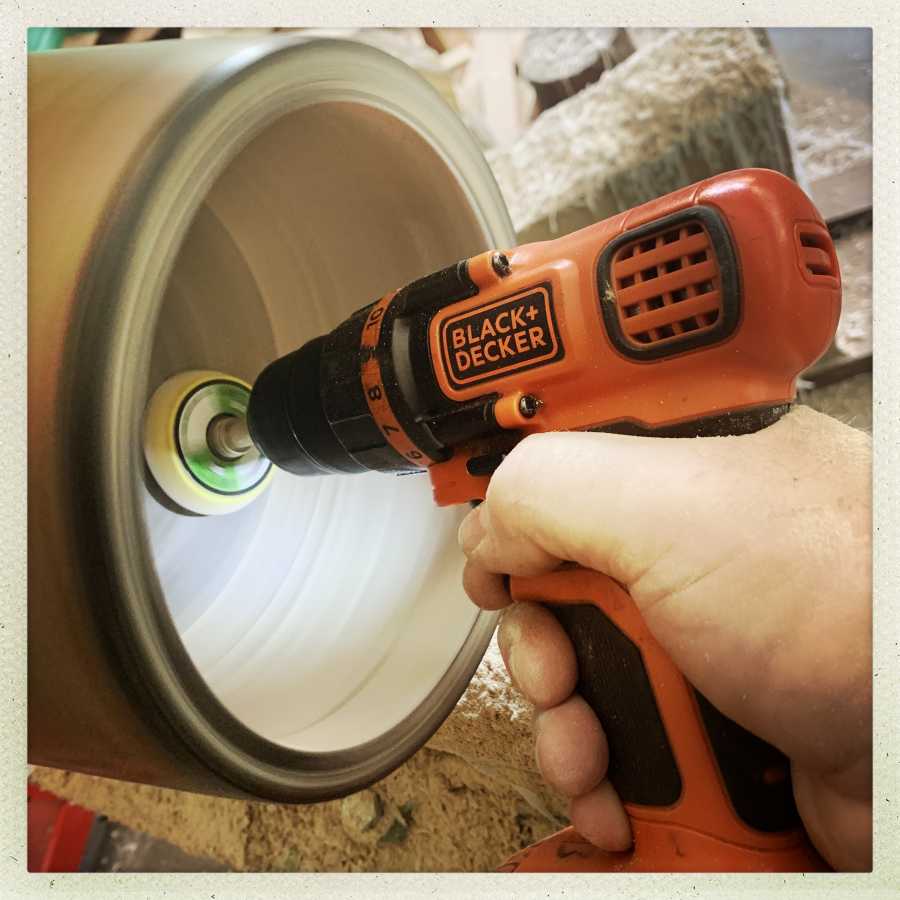 The little sanding pad worked pretty well but because it has a foam backing, it doesn’t shed heat so it melted after a while. Sure makes me wish I had my metal lathe leveled and running but in the meantime I can probably whip something up with some aluminum sheet and a threaded rod and just grind it round on my belt sander. The sanding pad was about 4 times faster and easier on my hand than holding sandpaper, so it was a huge win – if I needed to I would cheerfully treat the pads as consumables and just burn them up.

That reminded me of another thing I have in the shop: scuff-balls! 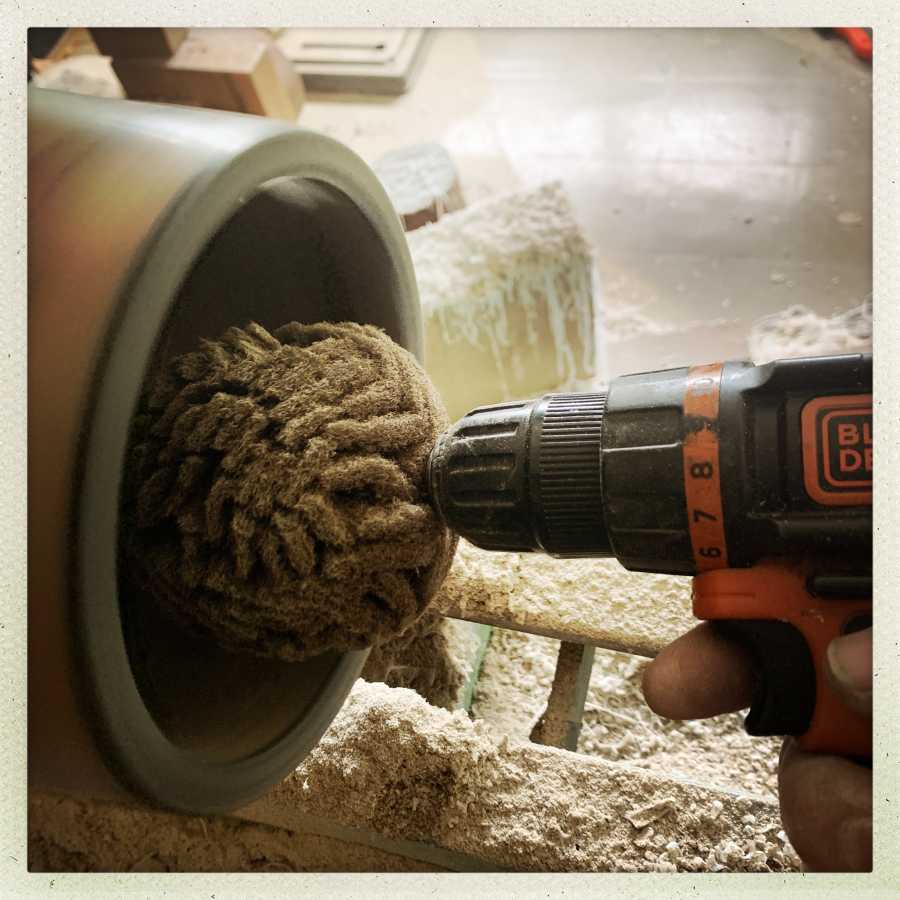 I got the scuff balls a few years ago to help a friend of mine remove some resin (don’t ask how it got there, OK?) from a travertine marble counter-top. The sanding disk thing held up to about 200 grit, and coincidentally the scuff ball is 400 grit. They make them in a wide range of grits so I have a small selection on order. As I said: anything I can do to keep my hand out of the bear’s mouth is good, and it’s good for my arthritis too. Mostly, I’m happy about the improvement in safety – that’s really huge for me.

The last stage was polishing it at length with yorkshire grit. I made my own because I already had all the stuff I needed for it in the closet – it’s beeswax, light oil, and diatomaceous earth. The diatomaceous earth breaks down as you polish with it and you’re left with a nice oil/wax finish. It’s a very fine grit and it takes a while, but the results are spectacular, especially on the resin surfaces. 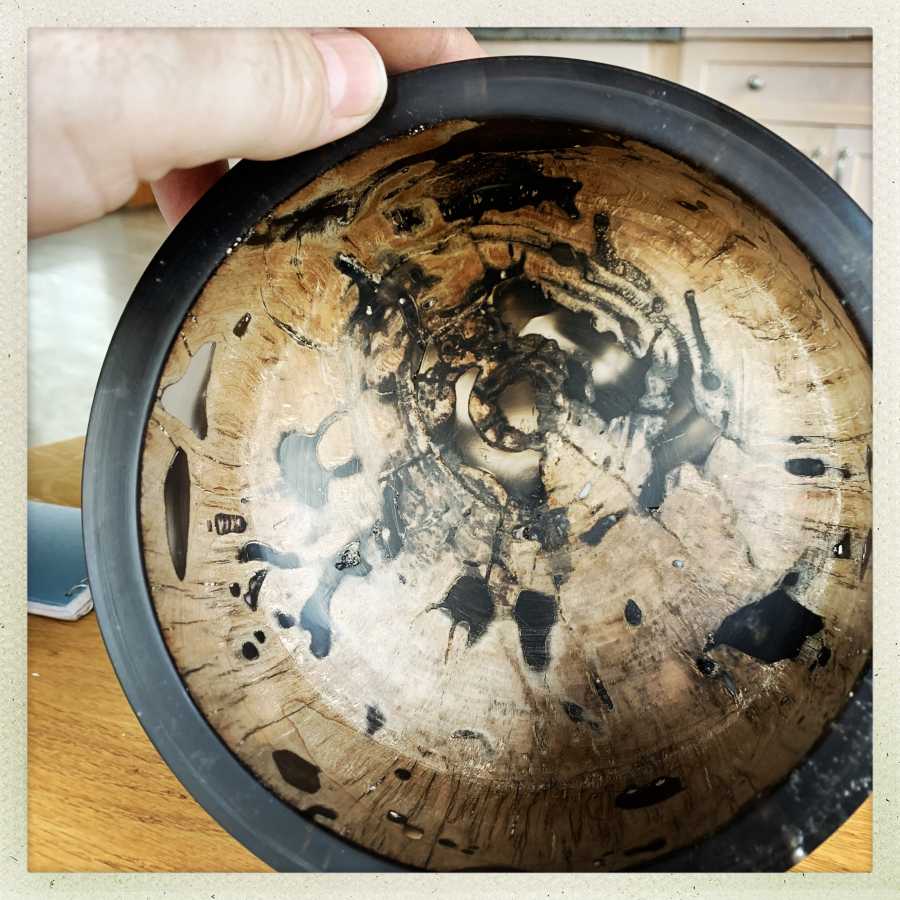 inside the mouth of the bear

To final finish it, I’ll probably give it a few coats of tru-oil until it’s mirror shiny. 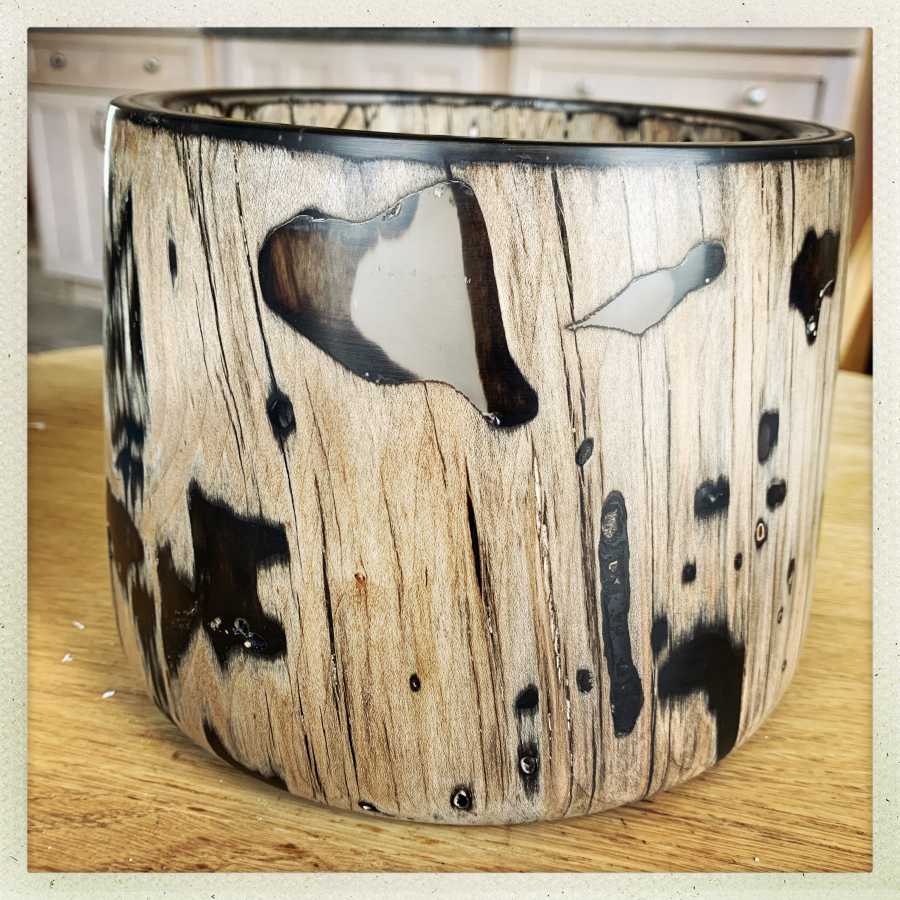 I wish I had a bigger flatter piece so I could make Ant Platter, but I think I’ll do some shallow bowls next. It takes a fair bit of work getting the piece of wood ready to turn – vacuum infusing, cutting, curing, cooking, resin infusing, pressure tanking, etc, etc. It’s a pain but I think it’s worth it.

Son of broken oak bowl is going to be even more work and a LOT more resin.