This morning, Sam and I assessed the bar that he made, and came up with a plan for how to turn it into two knives – a larger and a smaller one.

Here’s a place where I made a mistake. I forgot that Sam wasn’t going to work as fast as I do, which meant that more of the steel would oxidize away and he’d have slightly less to work with than I would have if I had started with the same stack. We had sandwiched a 1/8″ (3mm) bar between the two cut pieces of twist damascus – if I had gone with 1/4″ (6mm) bar, there would have been plenty of “meat” to push around. 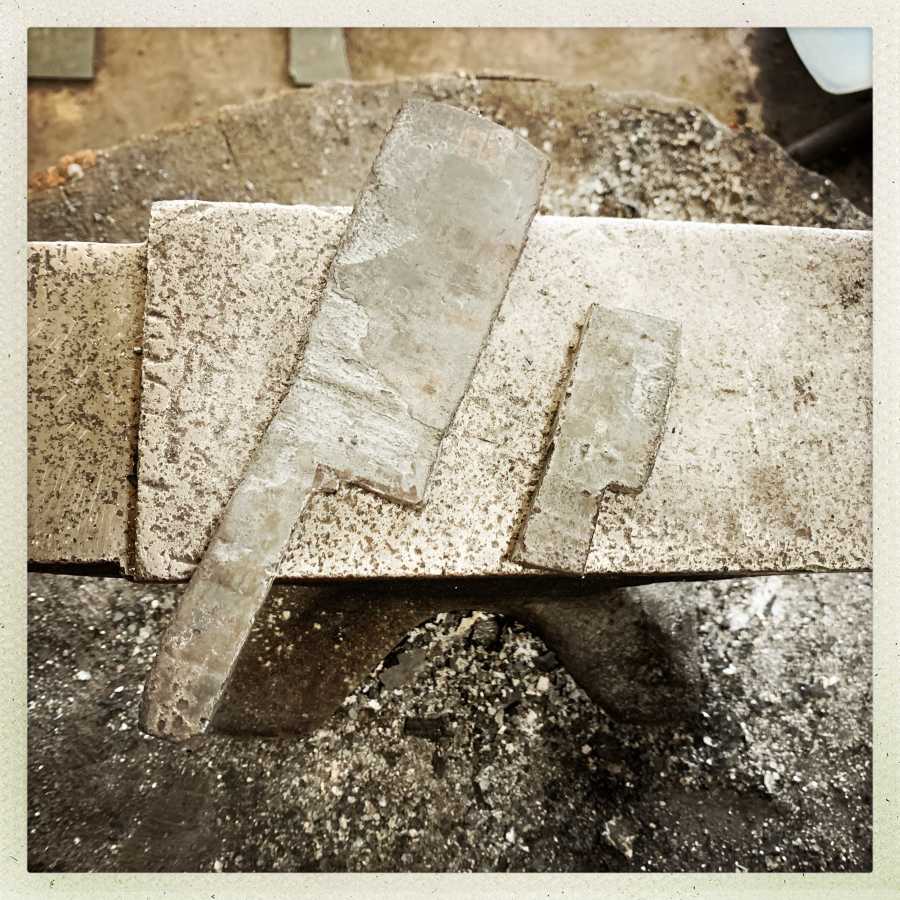 Since we were clearly going to be low on metal, the idea of a full tang handle was dispatched, and we decided to go with a Japanese-style tang/handle. Personally, I prefer it anyway, but it should not have been our only choice. A bit of cutting with the diamond wheel set up proto-tang(s) and blades, to be pressed and hammered into blade shapes. 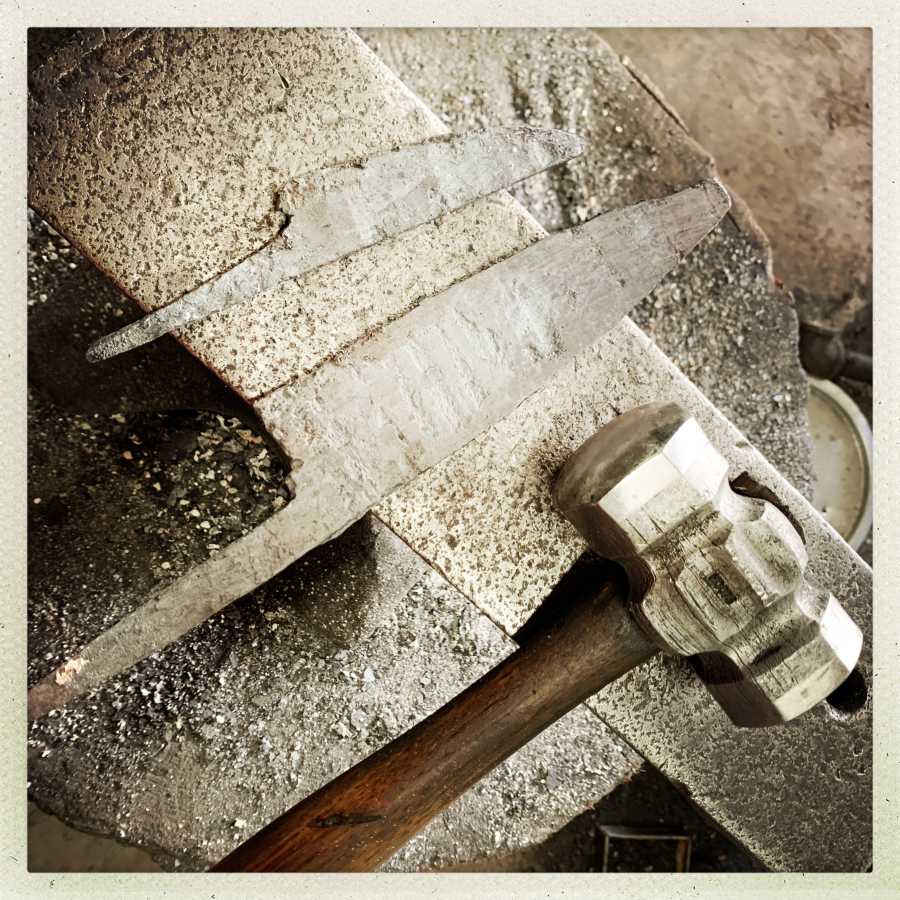 And: so far, so good. One of the drawing “crunches” with the press was a bit too deep and we had to do some work to get it flattened back out, and the tip is getting a bit thin (seen from the top, not shown) but it’s workable.

This is a lot of new conceptual learning to do in a morning. You have to worry about the grip of your tongs, your posture as you hammer, the angle (or non angle) of the hammer head, the temperature of the metal. I was thinking, while Sam worked and sweated and I sat in front of a nice cool fan, that there are between 10 and 20 things you have to control for at any given time. But I don’t have a good definition of what I mean by “control for” or worry about. But the tongs could slip, you could misplace the steel on the anvil and have it pop up in your face (bad!), you could bend the whole thing over like a taco, it can get too cold and work-harden and shatter, you can make a part of it too thin, etc. That’s 3 hours of work. For comparison’s sake, that would have taken me 1 hour, but I wouldn’t have had to run my mouth and explain what I was doing.

Next up is profiling the blade – grinding off the magnetite and crispy stuff and flattening the flats, rounding the rounds, and straightening the crookeds. Also, after the sides have been cleaned up, you can put it in the etch tank and see what it’s going to look like. I let Sam do that and didn’t tell him what was going to happen; it’s always fun to hear happy sounds coming from the other side of the room. 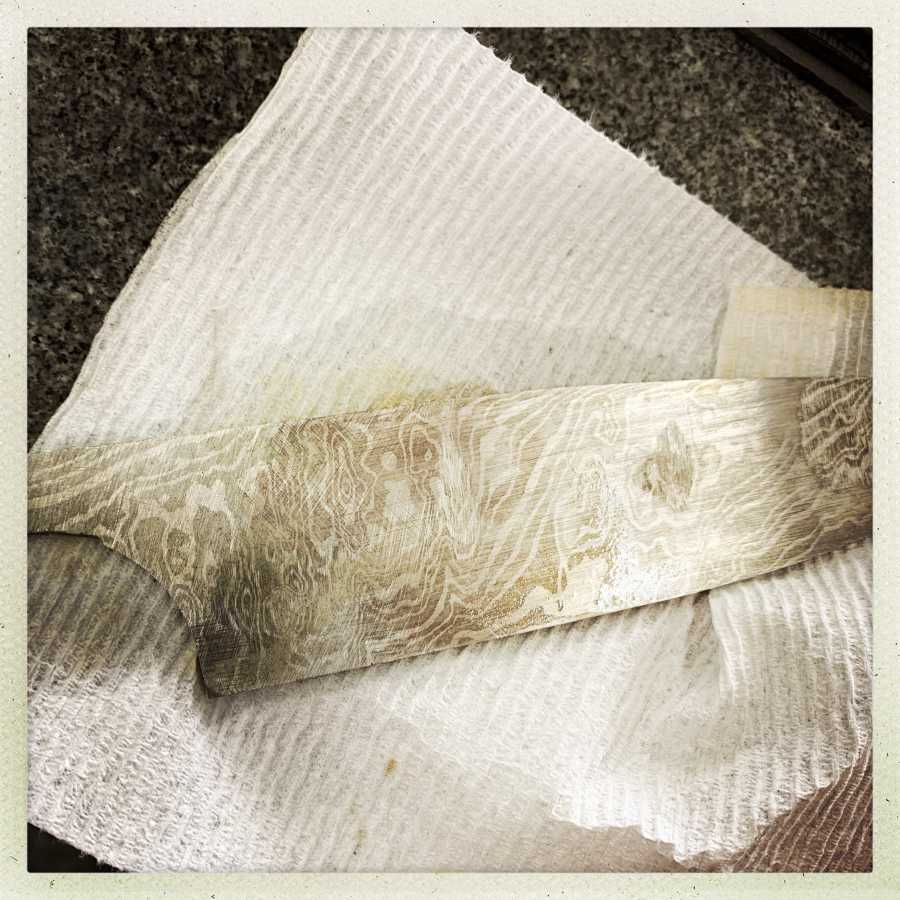 That’s about half profiled. From there, it gets quenched to harden it, then the bevel grinding begins. I’m guessing that’ll be a day and a half’s work, so Friday is handle day, which means tomorrow is “pick materials for handle” day and resin stabilizing them. So far Sam is leaning toward ebony bolsters with sugar maple handles and that sounds elegant and snappy and traditional-looking.

Trying to do aggressive error-prediction and analysis ahead of another person is mentally exhausting for me. Maybe it’s because I have trouble feeling that level of involvement in what other people are doing, and have to force myself to pay attention, or maybe it’s just hard. Either way, my brain feels like noodle.

Before we headed to the shop, I put up some dough for pizza and it was nicely risen when we got back. So we had pizza with pesto base, shiitake mushrooms, red peppers, garlic (duh), and proscuitto, with parmesan and mozzarella cheese. A couple of Angry Orchard ciders washed that right down and it was naptime.