Thank you all very much for your input on what to do with that chunk of maple burl. As George Bush said, “I’m the deciderator and I’ve, uh, what?”

I like (still) the idea of doing something Dune-like. I loved that book as a kid, and I always thought that it had a great visual sense behind it (I’m talking about the book, which creates vistas in your mind’s eye, not the movies, which created acidic churnings in my stomach) – so I decided to do an experiment and then I’ll try for a full-up version eventually.

It turns out that on Ebay there are people who sell 3D printed sandworm models. My mental image of a Dune sandworm is based on the original cover art, but the 3D model is based on the 80’s movie (which is still worth watching). 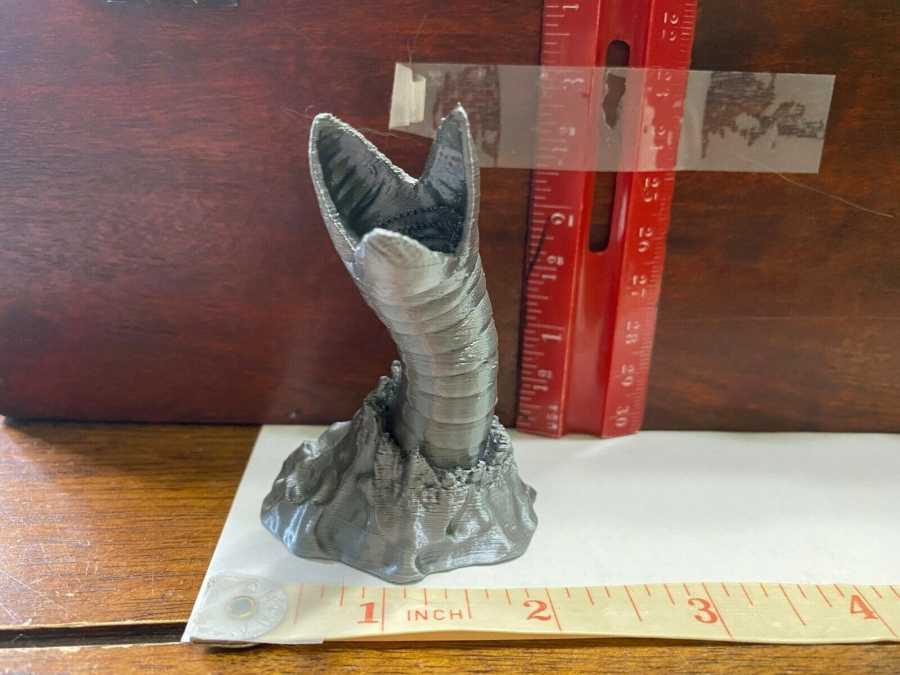 It doesn’t look like much. But, when it gets here I’m going to flip it around and send it to kestrel, who – you may recall – does amazing painted horses and manages to bring them to life incredibly well. [affinity] I’ve already checked, and this plan is approved, so I’m not surprising kestrel by outing the idea here. Anyhow, I may sand the base away on my belt sander before I send it, so I can just drill a hole in the wood and glue it in, then rough some “sand” around it or something. Or maybe I’ll just send the whole thing to kestrel and see what happens. To me, that’s the best part of artistic collaboration: you have basically created a pleasant surprise for yourself.

Since I’m not going to have an infinite supply of these model sandworms to work with, I thought I should try to get the atmospherics approximately dialed in before I try for the finished version. So, this is what I did:

That’s it. Because the container I used is a plastic bottle with a textured inner surface, the resulting resin object has a textured surface that makes it very hard to see what’s going on inside. That makes this all a great adventure. 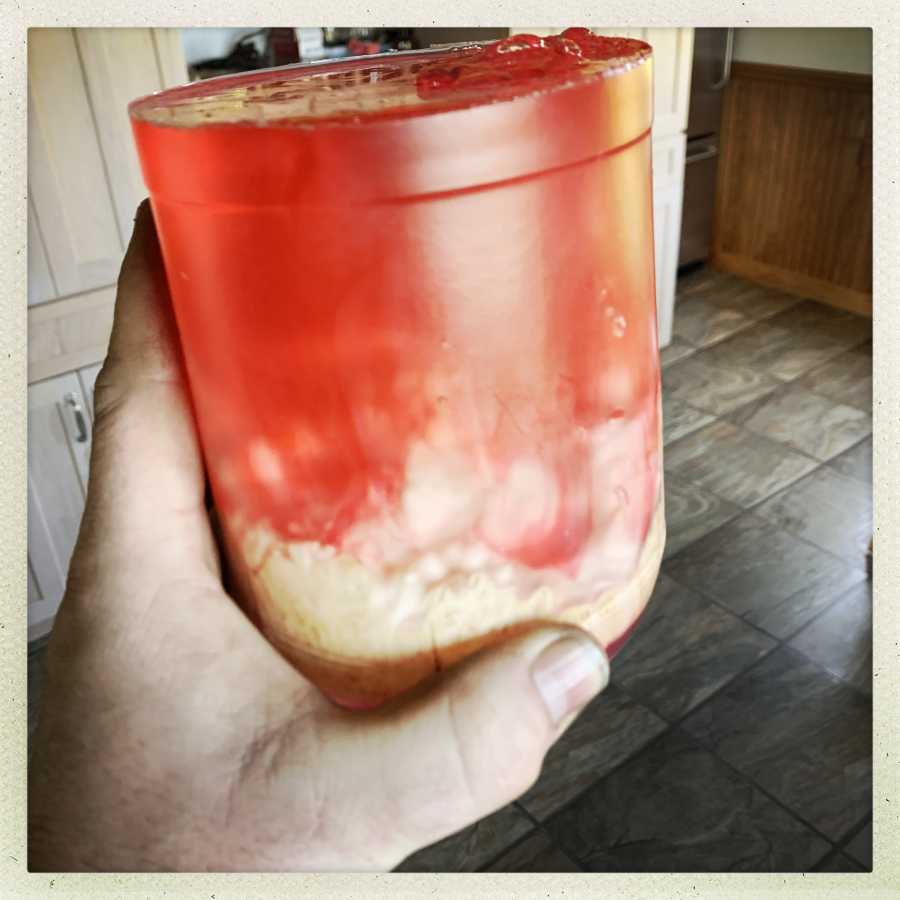 The next stage will be to flip it upside down and pour a puddle of resin at the bottom (it’s recessed) and put a disc of 3/4″ thick plywood atop it. The plywood will serve to hold screws for the base-plate which mounts it on the lathe. When I did the Icecrown mountain egg, I discovered that if your base is really solid and you mount a chuck ring on it, you really don’t need a tailstock center (but I’ll probably use one, anyway) especially when you’re doing your final polish.

I have several chunks of burl from the same piece of wood, so I expect to do a couple of these sorts of pieces. I also liked the other suggestion of going all dark and gothic, and I may do that, next. Still trying to think of how to make a galaxy swirl. I have some holographic flake chunk and maybe some blue pigment, over a “landscape” that is black with white caps.

In case you are not familiar with Patrick Stewart’s story about working with Sting when they were making Dune it’s pretty funny. I suspect Stewart is not as clueless as he makes himself sound, but that’s one of the hallmarks of a good raconteur.

Also worth a mention: there is an excellent documentary about Jodorowski’s artistic vision for Dune. It’s the movie that should have been made. But it was the 80s and CG wasn’t where it is, now.

And, unrelated to all of that: I heard a story from a literary friend that when Frank Herbert submitted the manuscript that became Dune, it was huge and full of digressions and quirks that detracted from its story. The editor at the publisher took what amounted to a gigantic turd and polished it into a great gemstone of magical beauty. Subsequently, being a “best selling author”, Herbert insisted on editorial control of his subsequent work, which is why there was never another masterpiece. That story, which I believe, inspired me to formulate my theory of best-sellers, which is that you can tell the best-sellers by hack writers because after their first best-seller, the next book is twice the size of the first one. Or, they begin to balloon with each subsequent book. I’m looking at you, J.K. Rowling, Diana Gabaldon, Tom Clancy, Neal Stephenson, and Frank Herbert. Great writers manage to be consistently concise and on message. Perhaps the best examples of that that I can think of are Terry Pratchett and Iain Banks.