Edgar Allen Poe was part of the landscape of Baltimore, when I was a kid. I’m pretty sure every high school English class had to read The Tell-Tale Heart. My favorite story was The Masque of The Red Death.

My parent’s place in France is an old (14th c.) farmhouse down in the south of the country. Dad fell in love with the area and bought an emptied-out shell of a building and re-constructed it back into a livable residence. I don’t remember a lot of that but I’ve seen pictures of what was the dining room with a great big acacia tree growing through the floors and out the roof. Remembering that with my current mind, I boggle at how much energy my dad had and how much work he put into that place. It was great for me, of course – I grew up measuring and sawing chestnut boards for the floors, all with hand-saws because dad was scared of circular saws. Anyhow, we sort of camped out in the place for a few summers, grilling pork steaks from the local butcher over little grills set in coals on the fireplace. There was a huge bay bush (tree) on the side of the house, so we learned to use the wood to flavor the meat. That was how I learned how to cook over open fire – another useful skill. The fireplace was typical of a farmhouse in those days – it was large – about 12′ across, and had stone wings that came forward into the room to catch sparks and reflect the heat. In the day, families would huddle in the fireplace, it being the only part of the building that was warm. So did we.

Dad turned some of those evenings into read-ins. We got through the entirety of The Hobbit, passing the book around and eac of us taking a turn. We also did Shakespeare’s Julius Caesar and Romeo and Juliet and Edgar Allan Poe’s The Gold Bug, The Cask of Amontillado and, The Masque of The Red Death. 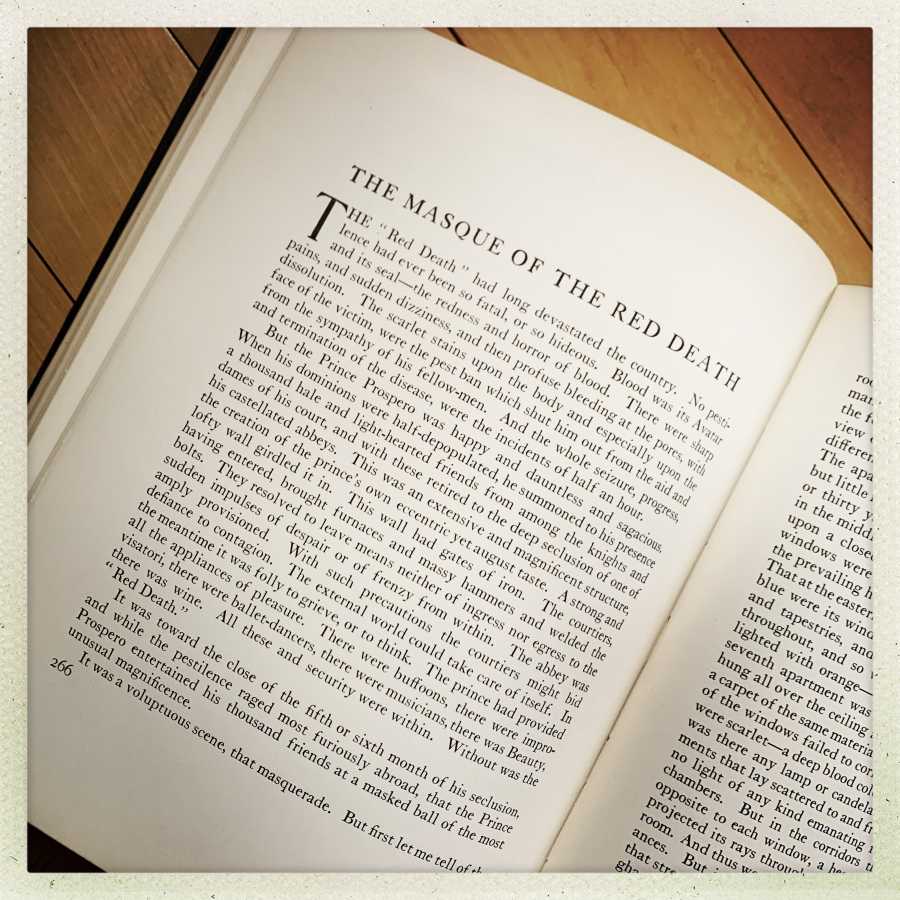 The Masque of The Red Death scared the shit out of me. I was probably 9 or so. The house we were sitting in had seen plagues and German occupation and all manner of things and time seemed like a breathable curtain surrounding the little group of humans by the fire. I’ve heard The Masque of The Red Death read in other situations and it just doesn’t compare for setting. Although, I wish I could arrange for someone with a really great voice – perhaps Samuel L. Jackson – to do a reading in the empty streets of some city, perhaps Rome. By a small fire, of course.

This is not a great performance:

but it’s Neil Gaiman. The video starts off with Amanda Palmer doing some Amanda Palmer stuff and about halfway through Gaiman does the reading. They shot it in some church, with a great big pipe organ in the background (which someone should have been playing, though we all know “you do not touch the organ.” 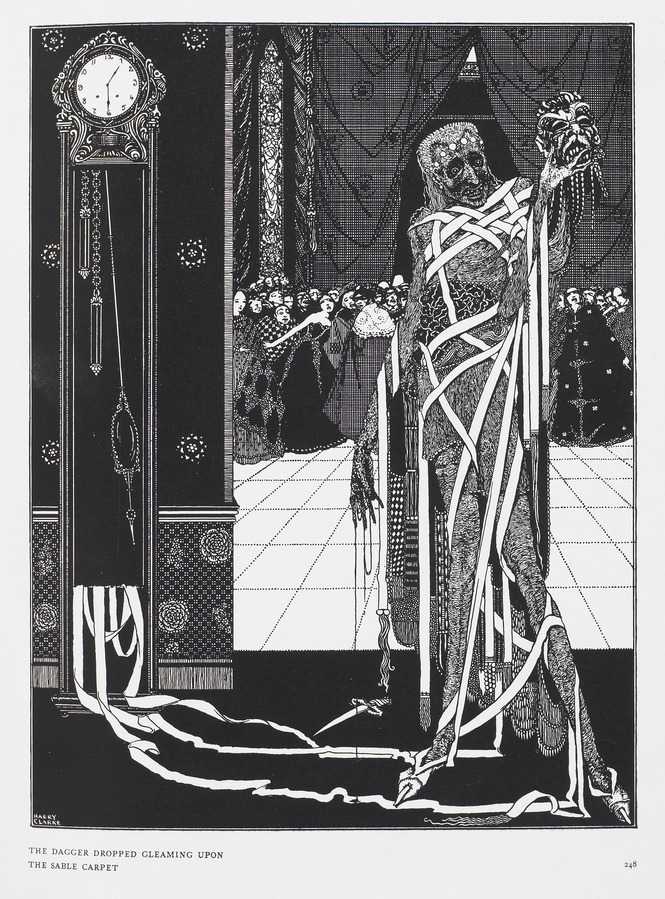 Notre Dame Cathedral had the best damn acoustics. And I suppose during the early periods of its construction it also sheltered little groups of humans clustering around fires, trying to stay warm with eachother’s company. The whole “social distancing” thing is the opposite of our instincts, which is to huddle in our family groups. I wish the politicians and doctors would say that: “look, it’s reasonable to hang out with your person or your special people, but only if you’re not sending an emissary out to deal with others and perhaps invite the Red Death to the party.”

The splendid 1933 Tudor Press edition of Poe’s Tales with illustrations by Harry Clarke is my favorite edition of Poe. At one point in time I had an ebay search set up and would snag every copy that came by for under $50. It’s very “giftable” and that’s how Caine got her copy. There’s a copy on ebay right now for $80 if you’re hankering. Oddly, Clarke does not appear to have done an illustration for The Masque of The Red Death in the 1933 edition – there’s a 1919 illustration by him of a scene from the story. It’s a short story, though the visuals in my imagination are wonderful.

I am including this because it’s the shizznit: 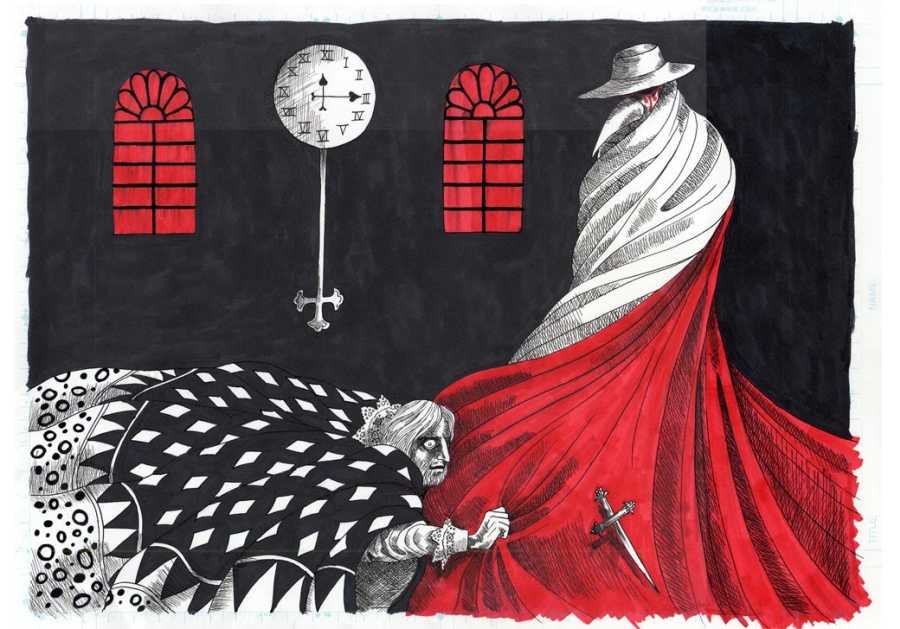 My dad did a book about day to day peasant life in the middle ages (more precisely, he was one of a group of researchers and authors) and one of the things he mentioned was entire towns returning to the forests after the plagues came through. He told me, “if you’re ever bashing about in the woods and come across the walls of houses, mark where you are and come back and tell me.” As you can imagine, that left an indelible impression on a 13-year-old. Nowadays I suppose spy satellites have made it easy to find all that stuff, and I still think he was mostly winding me up.