You may want to skip this one if you loathe American politics.

Here’s a prediction: the democratic party is going to tighten up their rules for nomination. It will be a failed effort, because – in order to serve their constituents (Well St big money and the establishment) they will have to make allowances for the occasional oligarch who wants to try to buy an office. Those allowances will also serve as avenues for the occasional populist riff-raff like Bernie, who comes along and hipchecks someone whose turn it is, and messes up the carefully prepared performance of “democracy.”

I find myself a Bernie supporter if only because he offers a chance of blowing up the other side of the 2 party system, the way Trump blew up the republicans into revealing their true nature. Not that it was carefully hidden, really, but Trump’s too stupid to hold a dog-whistle in his chubby, short, fingers – let alone understand how one is used effectively in politics. Now that Trump has taught the republicans that they can hate openly, and has started them on their “all or nothing” slide, the democrats are the remaining axis of the 2 party system that needs to be blown up.

It’s a disgusting travesty to see Americans taking Bloomberg seriously as a “democrat” candidate when he has been a republican his whole existence. I’m not going to dig through the finances but I believe he was donating to republican candidates up until Trump came along – i.e.: into the beginning of the 2016 election. In a small way, Bloomberg helped with that mess. In a normal world, that would be an offense rather than a campaign liability.

So it brings me back around to Bernie, who I don’t believe in very much, but at least he’s been fairly consistent for a long time. He’s not obviously some sort of stealth rules-lawyer who’ll do anything to get elected. One thing that’s surprising (maybe they’re sitting on it to play as a hole card once it’s thoroughly too late) is nobody has pointed out that Bloomberg has a history of buying elections. His 2002 win as New York’s mayor tracks fairly closely to where he is in 2020 – he’s a rich old oligarch who’s unhappy with the service in this restaurant, asks to see the manager, buys the restaurant, and starts firing people. Note that actually does make the restaurant a bit better for a while, and sometimes it even survives. But the motivation is a rich old coot getting grumpy and telling his golf buddies, “watch me clean this up.” The democratic field (and the media) should have been panning him as a “vanity candidate” except that then they’d have to pan everyone except for the sociopathic fringe of candidates who are so driven to rule that gaining power is their vital essence. For them, it’s personal – as you can tell by Hillary Clinton’s gracious decision to step out of politics after letting an election get stolen from her because she couldn’t be arsed to take the electorate seriously.

I suspect all of these clowns except Bernie; Warren might make a good president but she’s not in the race to make things better – she’s in it for personal power (or she’d have long ago started negotiating to be Bernie’s VP) And Mayor Pete’s entire career is a textbook arc of “go getter” and he seems to have done a good job of burying the bodies that arc always leaves. Both of them make the hairs on the back of my neck stand up, so it’s “Yay, Bernie!”

Bloomberg’s a republican manchurian candidate who is gaming the system because he can afford to reside anywhere (given enough time for his people to close on a new mansion for him) and he’s been seeding the American political system with money for about a decade. To be fair: all the oligarchs do that; he’s not as bad as the Koch brothers, or – he wasn’t – until he decided to try to buy an election. I can’t find it now but a few days ago I saw a pretty cool animated map of where Bloomberg’s donations had been going for the last decade, and they were substantial, adding up into the billions of dollars. Part of the problem Bloomberg presents for the establishment is similar to the one they faced with Trump: they’ve been coming to his parties for years, and now they can hardly assail him as a bad guy. They’ve been cashing Bloomberg’s checks and now when he asks the DNC to change the rules so he can jump into the campaign part-way into it, they know which side of their bread has butter on it.

Oh, here it is: [nyt] – the infographics are excellent. 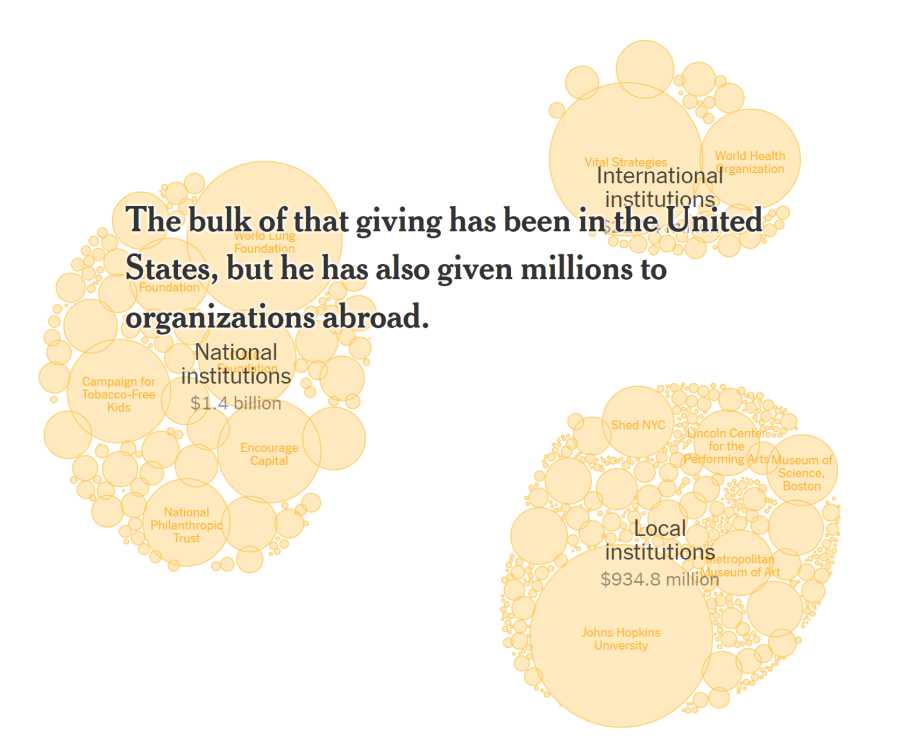 From a few hundred million dollars a year, he scales up to $1.2 billion in 2018. The NYT is typically mealy-mouthed establishment vehicle:

A former Republican who joined the Democratic Party in 2018, Mr. Bloomberg has long mingled support for progressive causes with more conservative positions on law enforcement, business regulation and school choice. He has often given voice to views that liberals find troubling: Over the past week, Mr. Bloomberg’s campaign was on the defensive over past recordings that showed him linking the financial crisis to the end of discriminatory “redlining” practices in mortgage lending, and defending physically aggressive policing tactics as a deterrent against crime.

He’s not a “former” republican. He’s a republican, who conveniently aligned with the democrats because they also have a weakness for money and he’s willing to exploit that.

We oughtn’t call his sort “philanthropists” we should call them “vanity donors.” The reason is simple: they are giving to the causes that they think are important, which means that they are exerting control over society with their money. For example, like his parvenu forbear Andrew Carnegie, he’s donating to philanthropic things like the Metropolitan Museum of Art and Johns Hopkins University – philanthropies that largely keep poor people out. Does anyone want to bet me that Bloomberg’s donations to “campaign for tobacco-free kids” wasn’t triggered by some kid with a cigarette dropping an ash on Bloomberg’s shoe? 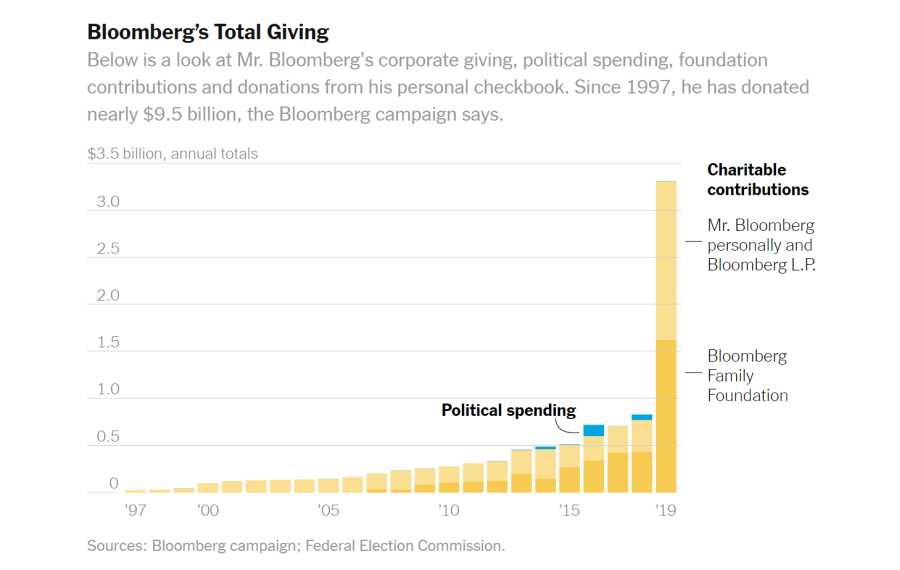 I don’t think it’s at all reasonable to divide giving into “political” and non-political – any time you give tens of millions of dollars to anything it has a political effect. Organizations that didn’t have the financial muscle to influence policy suddenly find themselves able to hire publicists and step out and make a difference. Sometimes that’s for the better, sometimes it’s not but in either case it’s pushing the will of the oligarch. That’s what we complain about the Koch brothers doing – I’m sure the NYT feels they have to handle Bloomberg with kid gloves because, well, oligarchs demand a certain amount of anilingus from media outlets that are situated under their thumb. 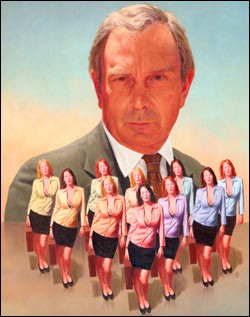 Here’s an article about Bloomberg from 2001, that was published in The Village Voice – it’s from an era before he had started handing out those great big checks. [villagevoice] Subsequent quotes are from it:

In a 1998, 272-page deposition never before made public, Michael Bloomberg said he would believe a rape charge only if it was supported by “an unimpeachable third-party” witness, and accused an ex-employee who said she’d been raped by a Bloomberg executive of “extortion.” Asked if he believed “false claims of rape are common,” the GOP mayoral contender and CEO of a vast financial-information empire replied: “I don’t have an opinion.”

Bloomberg’s comments are drawn from one of three sexual harassment lawsuits that have dogged him since 1996, all of which contended that “a hostile environment of persistent sexual harassment and the general degradation of women” existed at the 8000-employee company of the same name that Bloomberg founded and ran. In addition to his uninformed testimony about rape, Bloomberg also displayed a chilly indifference to sexual harassment laws and guidelines during the deposition. Bloomberg declined to discuss these issues with the Voice, though a company spokeswoman insisted it has “zero tolerance” for harassment or rape. While the rape case of sales representative Mary Ann Olszewski has been mentioned in occasional news accounts, it has not attracted as much attention as a companion case filed by Sekiko Garrison, another member of the predominantly female, and usually young, attractive, and short-skirted sales force.

The Garrison case focused on a claimed pattern of gender discrimination, with several women quoted in court documents as saying that they’d “lost lucrative portions of their sales territory, were denied business opportunities and received inferior bonuses” once they got married or had children. Garrison alleged that Bloomberg told her twice to “kill it” when she informed him she was pregnant, adding “Great! Number 16,” a reference to the number of women then on maternity leave.

I hate kids, but “kill it” is something I’d never advise a person who was with child.

I’m sure that was all from his republican days, last year. He’s a new guy now.

Drudge report allegedly is breaking the story that Hillary Clinton might run with Bloomberg as VP (thereby revealing herself as a stealth republican all along). I don’t think that either of them would be willing to share power that much, so I don’t give it credence. But it’s a scary possibility and it shows some of the other flaws in the 2 party system: you can do all this preparatory bullshit and then suddenly have a candidate do a gonzo flip on you once it’s too late and they have momentum. “I have decided to pick Bozo The Clown as my running mate!” what are you going to do about it now?

I wouldn’t mind Elizabeth Warren as president. But that’s because pretty much anyone with a metabolism, except Joe Biden or Michael Bloomberg would be better than Trump. I used to be pretty excited about her, to tell the truth; I felt she was more likely to accomplish anything than Bernie. But I don’t believe any of these people will accomplish anything – but getting Trump out of office is accomplishment enough these days.

I left a dangling thought: “afford to reside anywhere” – that’s a reference to the theory that Bloomberg might take up official residence in another state so he can offer Hillary Clinton the VP nod. I think it’s unlikely but the point is still interesting: a guy like Bloomberg can easily skirt rules that apply to other people. Note that that’s how Hillary Clinton became the senator from New York: she looked around for a state where there was a good chance that a democrat that was moderately popular could just walk in and get elected, then bought a house there and moved. Easy peasy when you have Clinton money. [NYT: is Hillary Clinton a “carpet bagger”] (A: Yes)