The liberalized world-view tries to understand and forgive the ordinary German for the holocaust. When I was a kid, we were taught that it was mostly Hitler’s fault, but that a smallish coterie surrounding him supported the effort.

That’s a nonsensical view, because the entire German economy and its institutions wrapped around and participated in the holocaust; the whole thing would not have worked, else. It may not be the case that the average German was OK with nazism and the holocaust, but the truth is that – whether they were OK with it or not – they did not intervene. Intervening would have required, perhaps, collapsing society from within, but that’s perhaps what it would have taken. Failure to intervene is not “necessary” for individual survival and well-being, it might be necessary to intervene in order to uphold one’s own beliefs. The alternative is to wake up one day and realize that we participated in, and aided, a disaster. 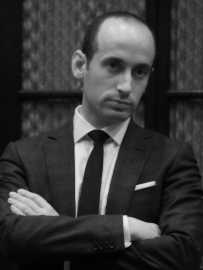 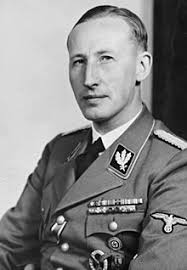 It seems abstract but it’s actually all around us right now. We just witnessed a case study in the whole process, surrounding the whistle-blower and impeachment proceedings. Step back and bit and watch: one person sort of came forward, and there was a brief firestorm of others rallying around – a brief rebellion of sorts. Now, the people involved in that are going to be punished. In order for that to happen, the justice department, senior agencies, CIA (probably) and the white house are going to have to work together to some degree. Their lack of coordination aside, this illustrates what I’m talking about: for it to work, everyone’s got to be in on it. That’s why we should reject Hitler-centric explanations of nazism. We need Austria/Germany-society-centric explanations and nobody’s looking for those because the conclusion of that search is something nobody is prepared to deal with. It’s similar to the pathetic soul-searching the US went through, trying to figure out who to point the finger of blame on for Trump. Was it the rednecks in “fly-over country?” Was it racists? Was it southern power politics? Was it a failure of the democrats? Was it systemic corruption in the electoral system? Yes. Yes, it was. It was all of them, working together.

The same reasoning explains why Trump’s impeachment failed. The democrats did not approach the event as though they were in a war for their lives. The justice department was already rigged. The senior agencies were already rigged. The white house met with senators and made whatever private promises were necessary; there was a whole series of meetings between Trump and various senators at Camp David, presumably while the price of his ‘exoneration’ was worked out. That was reported by the media, who also did not approach the event as though they are in a war for their lives. In part, that’s because Fox isn’t; they expect to be repaid for their service by becoming the official news channel of United States 2.0. – which they will, but I predict they will not like it. For what has happened to happen, it’s a big cooperative effort. It’s far more pervasive than people seem to want to recognize. For one thing, we have ICE basically doing whatever they want, so long as it’s reducing the size of the non-white population of certain states that might have “flipped” from the republican party. In the meantime, they can get their sadism on, but they know their real mission. For another thing, we have absolutely horrifying things like the Pennsylvania GOP telling the State Supreme Court that he’ll ignore its anti-gerrymandering orders. The GOP senators are refusing to turn over requested records, too – doing whatever they can to obfuscate and delay until the next election. Sound familiar? [think progress] The system is not broken it’s working as intended; it’s just gone off the rails because it’s been steered off the rails. This is the republicans making their big move – they are going to do whatever it takes to hold the white house and the senate and if they can do that, they’ll finish the rest of the job. 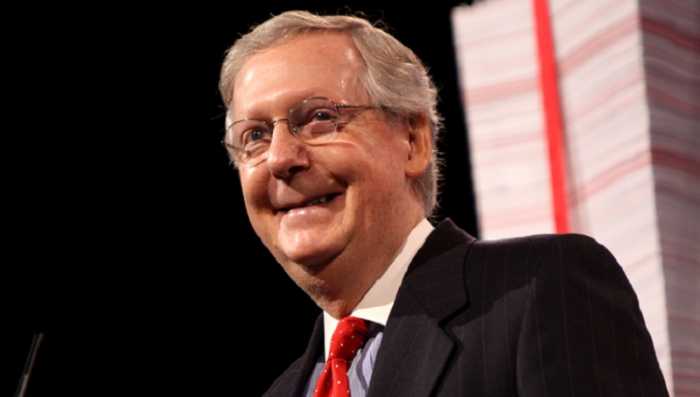 Last year I did a posting in which I pointed out that the republican party cannot just be beaten, it must be destroyed. Unfortunately, they’re way ahead of me; they figured that out years ago and re-arranged the system so that the checks and balances were removed and the new system’s components can work together and reinforce eachother. That does not require a precise, planned conspiracy with expert timing and kung fu fighting – it’s an emergent conspiracy that results from all the republicans recognizing an existential threat to their way of controlling the government, and they’re all responding each in their own way, across the board. When they get that done, they cooperate as necessary. If you want something to really scare you, look at the way Trump and McConnell have quietly packed the federal judiciary. We already know about the supreme court, but when Trump took office there were over 100 vacancies in the lower federal courts and courts of appeals – those vacancies were a result of the Obama administration eventually giving up when they realized that none of their candidates were going to be seated. This is exactly the same trick McConnell pulled to keep Obama from appointing a supreme court judge (giving Trump’s handlers that opportunity, instead) – except on a vast scale. The 100+ vacancies have now been filled with fascist republicans who will support the republican party’s agenda. We’ve already seen how Trump’s packing the appeals courts has protected him from having his taxes subpoena’d and it appears to be waylaying a fairly credible rape accusation against the man; that is going to get worse. [pbs] Those are lifetime appointments. The only way the democrats could possibly respond to this would be by expanding and re-packing the courts, or changing the appointment laws (which would result in the republicans fighting like the cornered rats they are) – I don’t think the democrats have the spirit for that kind of fight.

“They are the ones that judge all your disputes,” Trump said in a March 2018 speech. “They judge on what’s fair on the environment and what’s not fair.”

“I don’t know why Obama left that,” he added, referencing the vacancies. “It was like a big, beautiful present to all of us.”

It wasn’t a present; it was outright theft. That’s just Trump gloating like an asshole; he knows exactly what was going on.

As of May 16, 107 of President Trump’s nominees have been confirmed, including 40 appeals court nominees. In March, a federal appeals court flipped to a majority of Republican appointees for the first time under Trump.

They are mostly young, white and male. They will decide cases about elections, voting rights, immigration, the environment, labor, abortion, gun control and other issues that impact the lives of Americans. And long after Trump’s presidency is over, they will remain on the courts.

This is what I mean about how, when the nazis took over, they didn’t break things – they re-integrated them into a new control structure. They could not have accomplished the burst of economic and military activity that they did, if they had a dysfunctional, divided, political system. Sure, there were plenty of cogs in the vast machine that wished they could do something to stop it, but they were either unable to do anything, or scared to. Or both; usually both. That’s what we’re heading toward in the US, right now.

Look at the number of people who were involved in the impeachment fiasco who have been hounded out of the government: McKinley from state department, Yovanovich from state, god knows how many from FBI and justice, George Kent from state department probably has a target painted on his back and will least another few months at most, etc, etc. That’s how the third reich staffed itself up, too: people of good will were driven out, or scared into silence while the rest of the mechanism of power was re-structured to make their efforts moot.

I don’t think this was a conspiracy, but what happened was that the election-riggers and vote-suppressors realized that the headlights were on them and it was time to turn it up to 11. At about the same time, Mitch McConnell realized that his “Merrick Garland Trick” could also allow packing the appeals courts and judiciary and that’s why he was walking around with a big shit-eating grin for the last few years. Trump was like a crystal dropped in a super-saturated solution, like Hitler was, and around him congealed his Reynhard Heydrichs and Stephen Millers and faceless ICE administrators. It was an emergent conspiracy, triggered by the deer-in-the-headlights moment in which the republicans realized they’d either have to cheat harder, or play fair. That was a choice of no choice, because they don’t know how to play fair. 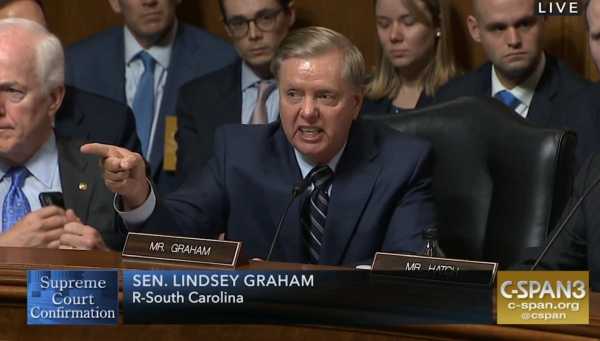 Just yesterday, I opined that what I see as the Rubicon for the US is when one political party uses the mechanism of power and the judiciary to outlaw the other. [stderr] Again, I was behind the leading edge of the slippery slope; it’s already passed me by: [slate]

My immediate reaction was the wrong one. I immediately thought “God damn that’s hypocritical! They can’t pretend to care about those very events that they refused to answer the house enquiry about.” Except the situation has moved past rational; hypocrisy doesn’t matter. If Graham has paused to reflect long enough to realize it’s hypocrisy, he doesn’t care – he just gargled in shit for Trump and hasn’t had time to wipe his lips, what’s another mouthful to Lindsey?

They are going to do this because they can.

[alternet] – psychologists on why we don’t stand up to oppressive regimes. Their answer is “cost/benefit analysis and our sense of what is appropriate” and I think that’s probably not too bad (though I am skeptical of the methodology by which one might support such a theory)

They argued that human behaviour is governed by two complementary, and very different, “logics”. According to the logic of consequence, we choose our actions like a good economist: weighing up the costs and benefits of the alternative options in the light of our personal objectives. This is basically how we get what we want.

But there is also a second logic, the logic of appropriateness. According to this, outcomes, good or bad, are often of secondary importance – we often choose what to do by asking “What is a person like me supposed to do in a situation like this”?

The idea is backed up by psychological research. Human social interactions depend on our tendency to conform to unwritten rules of appropriate behaviour. Most of us are truthful, polite, don’t cheat when playing board games and follow etiquette. We are happy to let judges or football referees enforce rules. A recent study showed we even conform to arbitrary norms.

I suppose it’s an answer of sorts to De Boétie’s question [mises] – oppressive regimes attack all the aspects of our cost/benefit analysis. Not only do they convince us that we will suffer if we resist, they convince us it won’t work, anyway. By pushing all the justifications away, they only have to deal with the few who are so unhooked that they really don’t care if they live or die, anymore.

An Archive Of Really Fascinating Stuff » « Sunday Sermon: There is No Line In The Sand