William Cohan at Vanity Fair has done a series of articles discussing what he believes is insider trading based on the Trump administration’s policies. [vf] It’s very interesting stuff; he does appear to have found some traces of major insider trading. And by “major” I mean that some of the trades have resulted in tens and hundreds of millions of dollars in profit on single trades. Suspiciously, the traders appear to be fond of certain securities, which is also a typical sign of a single criminal – the modus operandi is very clear. So, hours before General Solemani is assassinated, someone buys a bunch of futures options on oil and defense companies.

It is pretty simple. The people whose business is to trade these E-mini’s – these future contracts that are tied to the S&P 500 stock index – do this professionally. They have been doing this for 10, 20, 30 and in some instances 40 years. They see these anomalies in the trading. Trading has a certain pattern and a certain rhythm. It’s akin to the news business where if you’re a journalist on a beat and you’ve been working it long enough, you know when there is something anomalous. Well if you’re a trader who’s trading E-mini’s and that’s what you do all day and you see something anomalous and then you can trace it back to news events, well then you can’t help but wonder what’s going on and why people are making what appears to be hundreds of millions of dollars.

You make $170 million in a day, then you’re not going to wait around and see if that’s going to be $200 million in two days. You’re going to take your money and go.

How that works: you’re pretty sure that defense companies’s stock is going to jump up bigly tomorrow because a war is starting, so you buy a huge number of stock options on Northrup Grumman at today’s price, saying that you are ready to sell them at where you think the stock will be tomorrow. When it jumps up, you make a few dollars/share and you never had to actually do anything more than an online trade. It’s easy money if you know which way the stock is going to go and – let’s pretend it’s a stock that normally doesn’t move very much, unless a war starts – it’s kind of a give-away if I seem to think that Northrup Grumman will go up $2/share tomorrow, and it goes up $3. If I’m willing to gamble everything I’ve got, I can buy a huge number of options – more than I could actually pay for if I had to buy the shares – so I can make gigantic profits or experience horrendous losses; but not if I am pretty confident in the direction the market will go.

The article appears to surmise that people in the Trump administration are doing things specifically to move the market in directions that are favorable to their friends who have investments. I doubt that’s necessary; it’s more likely an emergent conspiracy in which one of Trump’s golf-playing idiot buddies has a friend who is a stock trader, and they mentioned that something was going to happen that was going to move oil futures or F-35 sales. That’s illegal, of course, and in a reasonably functional regulatory environment they sometimes would catch one of those guys, the FBI would perp-walk them, and everyone would stop cheating so hard for a couple months.

What I suspect has changed is the regulatory environment. Trump’s got Steve Mnuchin in charge at Treasury, and Mnuchin’s got no idea how any of this works, and does not care. He’s not got a degree in economics, either; he has a Ba in something or other, probably “applied scamology.” But Trump’s golf buddies are secure in their situation enough that they don’t feel they will get caught or suffer any consequences – they’d call the Don, who’d call Steve, who’d call some underling, and the investigation would evaporate. That’s all the extent of involvement necessary and, as we can tell from Lev Parnas’ tapes, Trump surrounds himself with corrupt figures like Paul Manafort and others we haven’t discovered, yet. They are all in there enriching themselves as fast as they can before the party ends. If there’s any cautionary notes coming from the old line republican senators, it’s “you guys are being too obviously greedy!” If they’ve dailed back on the number of people enforcing the law, then a criminal can be fairly confident that they won’t get caught and, if they do, there will be a Wall St friendly attorney general looking for an opportunity to collect a few more souls in return for looking the other way. 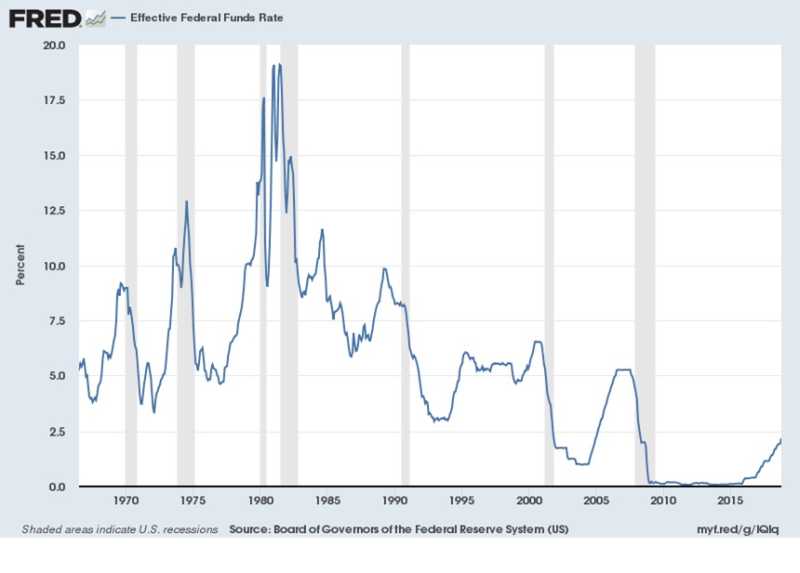 Trump has notably railed about the Federal Reserve’s monetary policies. He doesn’t understand a fucking thing about the stock market, but his minions do – what they understand is that if interest rates are held down and the money supply goes up, the stock market will go up for a while before it eventually comes crashing back down. Throughout the Trump administration, the stock market has been manipulated by Trump putting his guy in at Treasury and telling him to keep “juicing the market” – keep a monetary policy that creates a stock bubble. It’s easy to borrow money and use it to play the market. What happens if there’s a hiccup and it comes due? We saw that in 2008, except the Obama administration did not go after the money people who caused the problem, because they realized that the government’s lawyers were going to lose over and over if they tried to go after Wall St moguls worth hundreds of millions of dollars, who can remote-control an army of lawyers from their hotel room in Biarritz. where the FBI can’t get them. What happened to guys like Manafort is that they were egregious, tacky, and foolishly greedy. Mitt Romney doesn’t wear a $50,000 snakeskin jacket because he thinks he’s smooth and wants to act like old money.

Economists who track this stuff, and who have actually studied economics, have pointed out ad nauseam that this situation is not sustainable. [bs]

When the next recession hits, reducing the the policy interest rate by the traditional 4-5 percentage points will be impossible. The same issue applies to major central banks all around the world: the European Central Bank, Bank of England, Bank of Japan, and so on.

So the Federal Reserve and other central banks are likely to turn to the same set of policy tools they used in the previous recession: specifically, to the “quantitative easing” tool in which a central bank expands the money supply by direct purchases of financial assets. For the Federal Reserve, this has meant purchases of US Treasury securities and some mortgage-backed financial securities.

Trump’s declasse white mobster government is not as smooth as the Clintons and Bushes were, at separating the people from their wealth. What I think is happening is that the republican senate has concluded that it’s time to grab that cash with both hands and make a stash, then be prepared to swim off to someplace else when the water starts coming in over the scuppers.

What’s absolutely whack about this situation is that a little bit of insider trading: $170 million here or $300 million there – that’s nothing. May as well ignore it. All Trump has to do is keep interest rates low (predict they will do some qualitative easing right around time for the election, so the market starts to scream upward) and wealth will take care of the rest. Like with successive republican administrations, they’ll prime the economy to collapse so that if a democrat takes over they can blame them for the implosion. That’s what’s waiting for Bernie and they will blame it all on socialism.

Money, get away
Get a good job with good pay and you’re okay
Money, it’s a gas
Grab that cash with both hands and make a stash
New car, caviar, four star daydream
Think I’ll buy me a football team
Money, get back
I’m all right Jack keep your hands off of my stack
Money, it’s a hit
Don’t give me that do goody good bullshit
I’m in the high-fidelity first class traveling set
And I think I need a Lear jet

In the last 10 minutes of trading at the Chicago Mercantile Exchange on Friday, September 13, someone got very lucky. That’s when he or she, or a group of people, sold short 120,000 “S&P e-minis” – electronically traded futures contracts linked to the Standard & Poor’s 500 stock index – when the index was trading around 3010. The time was 3:50 p.m. in New York; it was nearing midnight in Tehran. A few hours later, drones attacked a large swath of Saudi Arabia’s oil infrastructure, choking off production in the country and sending oil prices soaring. By the time the CME next opened, for pretrading on Sunday night, the S&P index had fallen 30 points, giving that very fortunate trader, or traders, a quick $180 million profit.

Memo to Mitt: old money acts like the royals. Don’t do that.