In Tim Weiner’s Legacy of Ashes [wc] he writes at one point that what the US needed was an intelligence agency, but what it got was a “Department of Dirty Tricks.” 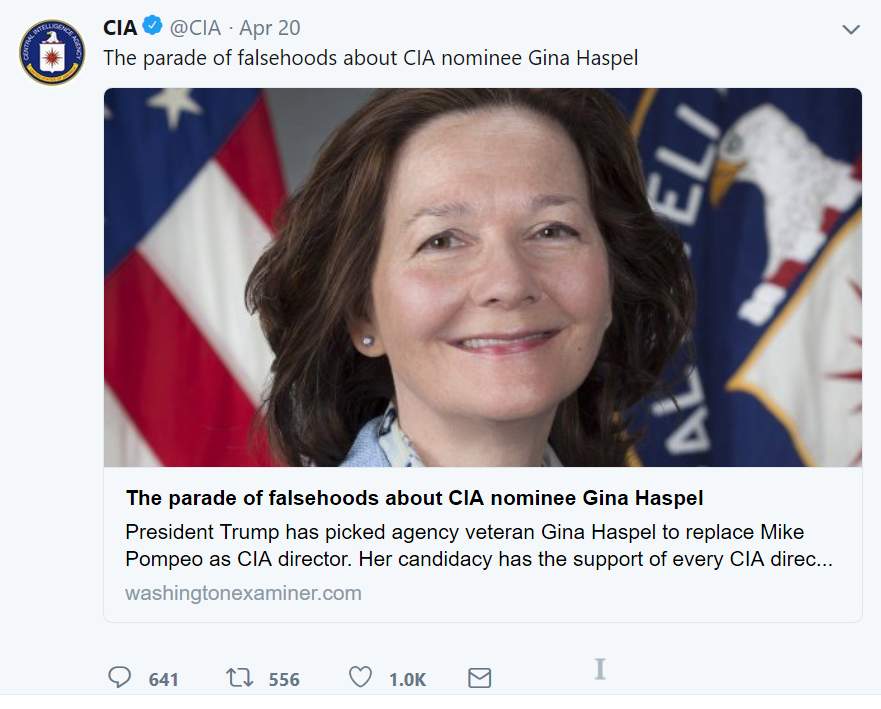 The CIA has dabbled in intelligence, but it seems to mostly specialize in dirty tricks and skullduggery. One of the popular accusations levied against the agency is that they managed to miss the impending collapse of the Soviet Union. That’s hardly the worst mistake the CIA has made, unfortunately, there was also that embarrassing “missile gap” thing, and the “Iraqi WMD” thing. CIA and FBI have been in a low-level state of warfare since the beginning and some historians believe that war has done a great deal to affect the upper levels of government; think about it this way – Watergate was the FBI blowing a CIA undercover operation to get rid of a president that was too close to the CIA, and who had not sufficiently supported the FBI by helping bury that heap of awkwardness called COINTELPRO.

The CIA’s “specialty” has been attempting “regime change” in many places and many ways; their record has been spotty. My belief is that a lot of their “regime change” actions have been classified to cover incompetence and crimes against humanity. If you’re unconvinced, go read about the Phoenix Program. [wik] The CIA can’t seem to let go of its desire to take people someplace private and break their bodies and minds. One other thing it’s pretty good at: cleaning up the evidence of its own crimes. In a notable incident, the CIA broke into computers it had provided congressional investigators who were investigating – The CIA. [nyt]

The inspector general’s account of how the C.I.A. secretly monitored a congressional committee charged with supervising its activities touched off angry criticism from members of the Senate and amounted to vindication for Senator Dianne Feinstein of California, the committee’s Democratic chairwoman, who excoriated the C.I.A. in March when the agency’s monitoring of committee investigators became public.

In a normal world, the CIA would have suffered serious repercussions for interfering with an investigation, but it appears that congress backed off when it realized that the CIA has a history of being extremely dangerous. Seriously, I’d much rather investigate the mafia than the CIA; you can negotiate with the mafia, maybe.

If we’re pretending that there’s a justice system in the US, that means we’re also pretending there is process and evidence is properly collected and presented, etc. Like with the congressional investigation, that would mean that the CIA (and the FBI) are not interfering by shoveling sand in the gears of justice. The government’s department of dirty tricks ought to keep its hands out of investigations, right?

Now, it appears that the CIA has been interfering in the case against Julian Assange. As you can imagine, that’s going to give Assange’s lawyers a lot to work with; it may lose the government its case. Not that the government cares a whole lot, anyway – their plan is to keep Assange locked up in trials for the rest of his life; and they’ll probably do whatever they can to shorten that life by making him as miserable as possible in the process. But it certainly ruins the appearance that the government was trying to create: [the hill]

The Spanish newspaper El Pais broke the story that UC Global invaded Assange’s privacy at the Ecuadorian embassy and shared its surveillance with the CIA. It demonstrated step-by-step, document-by-document, UC Global’s actions and its contacts with the CIA. UC Global reportedly installed cameras throughout Assange’s space in the embassy – including his bathroom – and captured Assange’s every word and apparently livestreamed it, giving the CIA a free TV show of Assange’s daily life.

The behavior of UC Global and the CIA seems indistinguishable from the government’s behavior in the Ellsberg case, which a federal judge found to have “offended a sense of justice” and “incurably infected the prosecution” of the case. Accordingly, he concluded that the only remedy to ensure due process and the fair administration of justice was to dismiss Ellsberg’s case “with prejudice,” meaning that Ellsberg could not be retried.

Can anything be more offensive to a “sense of justice” than an unlimited surveillance, particularly of lawyer-client conversations, livestreamed to the opposing party in a criminal case? The alleged streaming unmasked the strategy of Assange’s lawyers, giving the government an advantage that is impossible to remove. Short of dismissing Assange’s indictment with prejudice, the government will always have an advantage that can never be matched by the defense.

The issue is not Assange’s privacy so much as that he was (arguably) a suspect in a criminal matter, but was placed under warrantless surveillance that completely violated his legal rights. Any evidence that the government might have regarding anything Assange did during that time is tainted. In other words, the CIA’s incompetence may have cost the government an important case.

One of my favorite jokes (it’s all in the timing):
Q: How do you know the CIA didn’t kill Kennedy?
A: He’s fucking dead, isn’t he?

And if you still believe that story that Assange’s accuser was not influenced by the CIA, I have 10 kilos of laotian heroin from the 60s that I’ll sell you for only $20.

I do not think Assange is an important case. In fact, if you recall, he helped Trump get elected – the only reason he’s sitting in prison having his rights violated is because he dared challenge the authority of the state.

This ought to be a massive scandal that ought to end with Gina Haspel resigning and “accepting full responsibility.” But under the Trump administration, it’s lost in the cloud of scandals and it will be forgotten soon. Like Assange, who is – for all intents and purposes – in an oubliette.

UC is a contracting company. I.e.: spies for hire. The CIA apparently thought that they’d get some plausible deniability by not sending their own people in to do the job. More likely, CIA hasn’t got anyone competent enough to plant a camera properly anymore.