We should be very, very careful about believing anything we are told regarding aircraft being shot down, and where they are shot down.

When the US aegis missile boat Vincennes shot down a civilian Iran Air flight, in Iranian air space, while it was in Iranian territorial waters, the first story we heard from the US government was a bunch of lies. The aegis boat, with the most expensive electronics complement in the world, mistook a commercial jet that was climbing on a course out of a major airport for an F-14 that was diving to attack. Yeah, right. The US also conjured up some absurd scenario that the Vincennes had reason to be concerned about Iranian F-14s because some of them might have been converted to drop old-school “hard bombs” – which would be absurd and suicidal, except that the US decided that the Vincennes’ commander had acted reasonably and it was the planeload of Iranian civilians’ fault they wound up dead. The fact that the Vincennes was in Iranian waters was also the Iranians’ fault because Iranian patrol boats had sailed out into international waters and the Vincennes said it was fired upon (an absurd and suicidal thing for the Iranian patrol boats to have done) and so it chased them when they fled. In other words, the Vincennes was in the middle of committing two acts of war when it committed another one that was also a crime against humanity. Well, you know how sneaky those Iranians are, they forced a dramatically superior ship to make a horrible mistake, which took a whole lot of whitewash to cover over. [wik]

The commander of the Vincennes was awarded a medal for courage, because, I don’t know why. Perhaps it was for not shitting his pants at the prospect of being attacked by a sole F-14 on an apparent suicide run. It just sucks when the first reaction out of the US is to take a deep breath and begin to lie its ass off. I’m not going to run through the Gulf of Tonkin incident, which bore a remarkable similarity to the Vincennes’ claimed patrol boat attack, or Korean Airlines 007, in which the Soviets claimed that a civilian jetliner looked like a spy-plane and its pilots could not tell the difference on visual approach (spy planes don’t wear Korean Airlines colors and logos!) – the lies started around the same time the bodies were hitting the water. The US was lying, too, trying to hide the fact that it had been sending spyplanes right along Soviet airspace

I hope the Russians/Ukrainians don’t troll the world back hard about the shoot-down of MH17. They’ll give the missile crew a medal of courage and everyone will be cleared of wrongdoing.

The drone? The drone is irrelevant. It’s just money; the US lost an expensive shiny thing. There are deeper implications in the shoot-down that I will get to, but other than some dick-waving drone pilot’s commander, nobody should have their career broken on the rack. 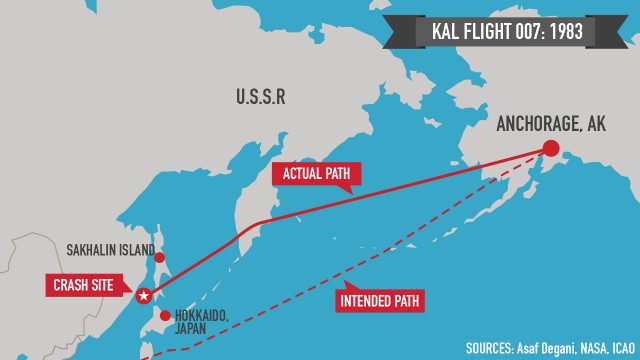 .. kinda was off course

This is the problem: people keep saying “all this dick-waving is going to get people killed” because a) killing people in this manner is a crime against humanity/war crime and b) stupid government asswipes have a track record of killing people in this manner and then lying about it. It means that people – the non-government, non-lying sort – can’t tell their governments “hang on, don’t do that, that’s why we have this whole idea of declaring a state of war, yadda-yadda. Back a few centuries ago, there might have been a declaration of war, which would have served to notify the civilians in the area to get the hell out. These incidents are cases in point for why governments are not supposed to do this kind of thing. It drives me absolutely livid when I see the US media talking about “increased tensions with Iran will maybe lead to a war” when, at the same time, they report that the US Navy has sent more dipshits loaded with weapons to sail around really really close to Iranian territorial waters because gosh, darn, those Iranians are sure as hell threatening Newport News and New York City. What? They’re not? Then maybe the Iranians aren’t ratcheting up the aggression. In fact, I’d be willing to buy that the Iranians were ratcheting up aggression if they started flying drone missions around US bases in Qatar. Not that that would be the US’ diplomatic problem, it’d be the Qatarese. The US gets to complain about Iranian aggression when the Iranians start sailing Arleigh Burke-class aegis missile boats around San Diego. Of course that’s an absurd scenario – if the Iranians had any of those, they’d keep them near their territorial waters to discourage American naval aggression. The whole scenario is ridiculous: that force that you don’t have, which can’t really threaten us, is so scary we are going to claim you are being aggressive because we imagine how aggressive you’d be if you came to attack us and we had to sink you all. Like that nonexistent F-14 that wasn’t carrying hard bombs, that made the commander of the Vincennes shit his pants so hard he killed 200+ people and got a medal for courage. You know what Putin would have given him? It comes in one size: 9mm.

Next up, some shitbird from Washington is going to try to claim that Iran is an “existential threat” or something like that. An “existential threat” means they could destroy us. And by “us” they probably mean Israel, except Iran isn’t stupid and suicidal enough to try that, either. Remember, Iran has not started a war since back in the Ottoman days, and the US has done nothing but start wars since World War II ended. It’d be as if an over-armed white supremacist drove a tank through the wall of your house and then shot you when you complained, because you “scared him” the way you jumped up from your breakfast table, which did have a butter-knife on it. Iran has a military, of course, but it’s not configured for force-projection, i.e.: it’s defensive.

Trump tried to grab the laurels of a peace-maker for calling back the US outbound air-strikes that were going to be an act of war in retaliation for the Iranians destroying America’s expensive toy. I wonder why? Here’s my prediction: the Iranians said “it was in our air space!” and the US said “no, it was not!” – that was the US pentagon’s knee-jerk instinct to lie. My bet is that Trump asked Bolton and Pompeo “was it really in international air space?” and they said, “uh, well, that’s what we’re telling everyone.” I bet that the war pigs in the administration were trying to manipulate the president into starting a war, and they knew perfectly well that it was a Gulf of Tonkin scenario: once they got the shooting started it would escalate from there under its own logic. But Trump’s lizard brain is nothing if not suspicious, he ought to be feeling pretty paranoid right about now, since everyone (including me!) wants to see him thrown under a bus. 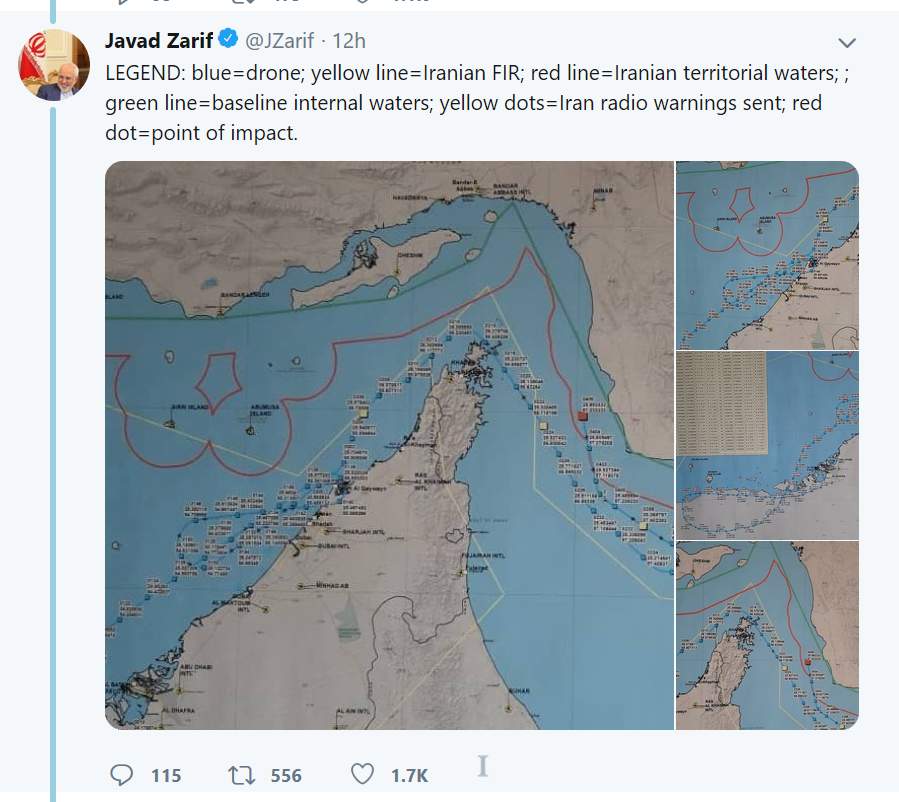 Now, if Zarif is telling the truth, it looks like someone was tracking the US drone for quite a while, and has pretty darned accurate positional information. Zarif is the foreign minister of Iran, so we should assume he may also be a lying politician. But it poses an interesting problem for the US because now they have to explain why that chart is wrong. It is wrong, isn’t it? I can imagine Trump asking Bolton and Pompeo, “is this accurate?” and them saying, “well, a bit.” Trump may have called back the bombers because he realized that he was looking at the underside of a bus.

Of course, there’s the other question, which is that the US was prepared to start an act of war over a drone that may have actually already been committing an act of war. Gosh, I wonder if that drone pilot is going to get a medal for courage, too?

What scares me about all of this is that it sounds like the US military machine is completely off the hook, and probably queued up the air strikes without even bothering to tell Trump. Then, when the whole thing went down, they yelled “WOO HOO!” and puffed their chests out and told Fox News that someone was gonna get their ass kicked. It sounds like Trump may have been the grown-up in the room. And that scares me a lot. If we see shake-up in the national security council, we’ll know I’m right, and that Zarif was right, too: the drone was shot down while it was in Iranian air space where it had no business being; it was planning an attack.

I have to hand it to Zarif, whose trolling skills dwarf Putin and Macron’s: 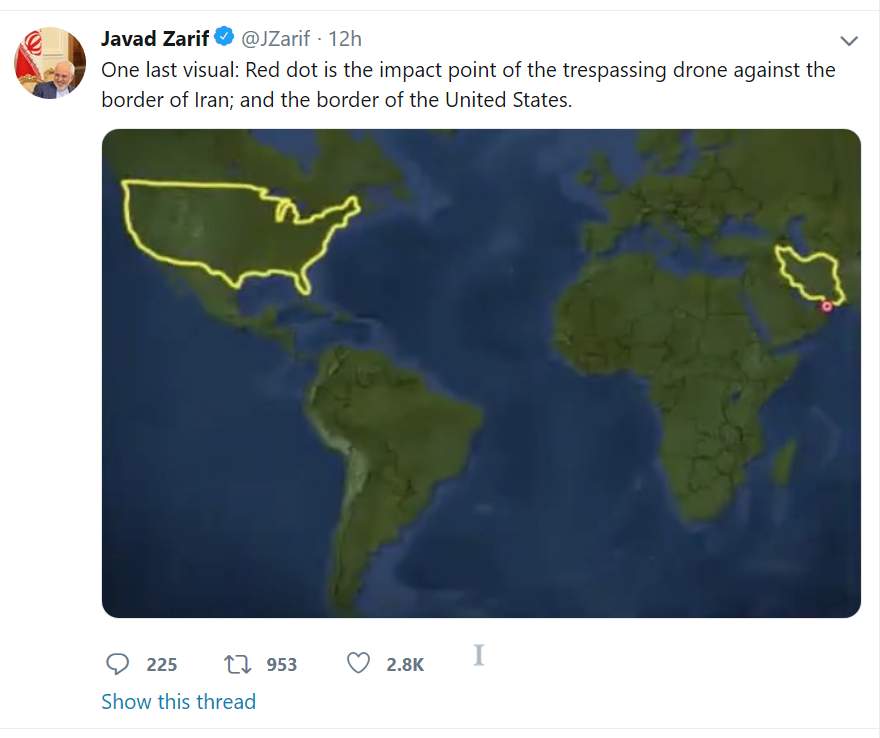 I am happy that the international community’s response to this non-incident has been skepticism. “Well, where was the drone?” same as when Obama started talking about “red lines” and whatnot. The rest of the world has long ago caught on that the US’ foreign policy is irresponsible and dishonest. Now, if only the American people would catch on to a little bit of that. Sadly, both political parties that control the US are dishonest and irresponsible. Does anyone here doubt that John Kerry, Madeleine Allbright, or Hillary Clinton would have handled this situation peacefully?

But, wait: there are two possible scenarios.

If interpretation #2 is correct then that means the Iranians are being pretty moderate; they could have said, “Sorry about your drone; we thought it was a B-2” (sound of the entire DoD collectively sucking in its breath) – but it’s still really bad that the Iranians a) tracked a stealth drone, b) knew it was a drone c) shot it down.

Some of this stuff is stupid and obvious: we should assume that the Iranians have ground ‘resources’ watching for what appear to be outbound strikes. I am genuinely afraid that the US is so foolhardy and arrogant that they would be so disrespectful of a slightly lower-tech foe that is willing to defend itself. You know where I’d position a couple guys with cell phones (or internet messaging)? Al Dhafra air base in UAE. Because that’s where the F-35s are. [air force times] The B-1s are at Al Udeid in Qatar. A wire-guided anti-tank missile would make a mess of very expensive wreckage. The Vietcong used mortars for that sort of thing – all they had to do was get within a couple miles and they could have several rounds in the air before the first one hit. 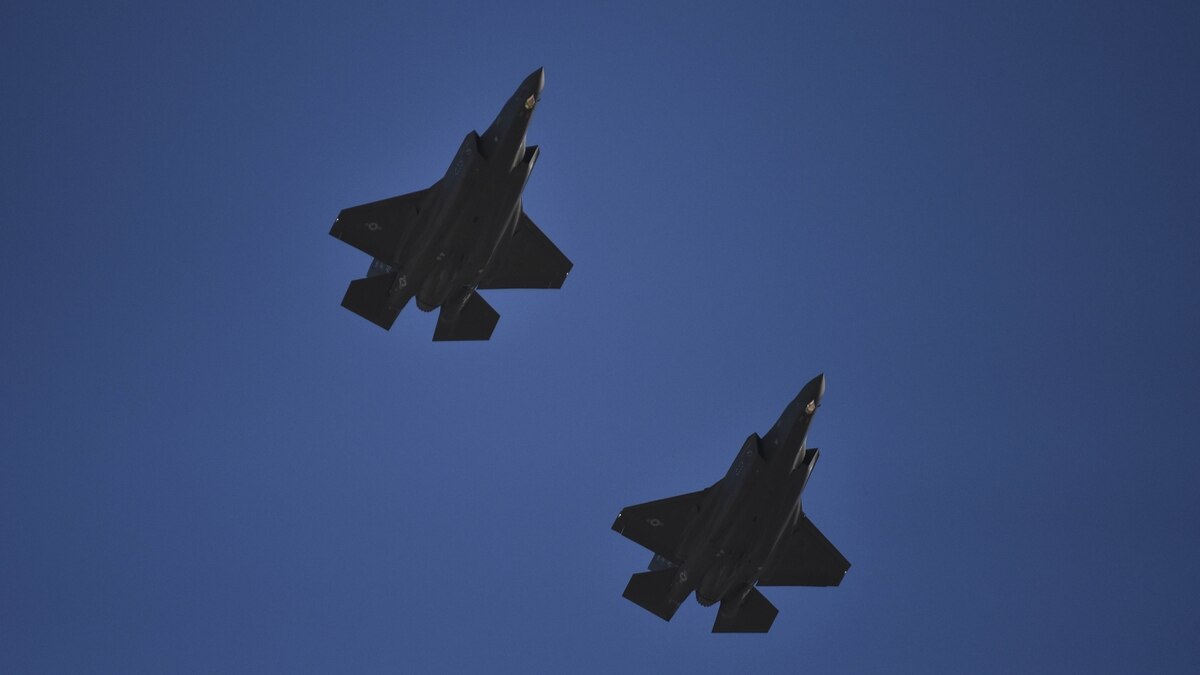 When Trump, et al, talk about how there’s going to be hell to pay if Iran or any of its regional allies do anything, they’re basically replaying the events of Millenium Challenge 2000 – [stderr] – they’re going “holy shit we have a lot of assets exposed here! What if we were dealing with someone who was not helpless and foolish?” I actually believe that’s what’s going on: the US Navy drone that was shot down was sent in lieu of a ship – a ship which could be overwhelmed and sent to the bottom with a couple of spreads of ballistic and cruise missiles. Iran obviously does not want a war. But they’ve only got one strategy if the US attacks, and that’s to do something shocking and damaging.

Most commercial aircraft are steering very clear of US forces in the area.

Unrelated: I saw a rather amusing point regarding the photo of alleged Iranians allegedly putting a mine on an alleged oil tanker. “When removing a mine, you all tend to stand in a cluster around it, like the guys on this ship do.”