I’ve been doing some web design, and it really sucks with a gouty foot. You’ve got to picture me hopping around cursing without pausing for air. It’s finally receding a bit, which means it’s merely miserable.

Once I unloaded the posts and rebar and arc welder, chop saw, mask, gloves, wire, yadda yadda, it rained. I salvaged the electrical equipment (and did not play with the arc welder near water) and yesterday it dried enough that I could assemble the reinforcement for the hammer pad. My welding still sucks but I got a lot better at smoothly moving the point back and forth and building up material where I needed it. 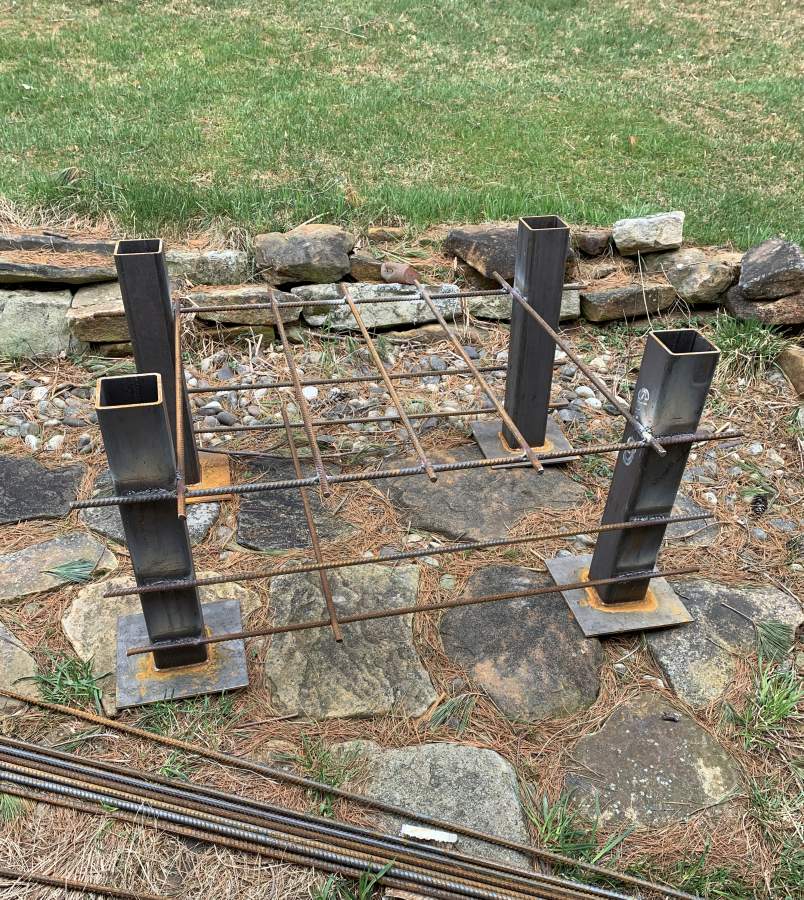 When I am working on things, I get curious and often send myself text messages about things that I need to research in the future. Where does rebar come from? Well, it’s mild steel and it’s mostly formed out of chopped up recycled stuff: cars, guns, other rebar, ships. There is footage on youtube of a rebar making plant (in China, naturally!) and it’s a pretty amazing process. There are many things that you could get snagged with or caught up in, all of them hot and heavy; it’s a world of “nope.” Interesting, though, the Chinese rebar plants are heavily automated; unlike US steel plants before their unfortunate death. The US refused to invest in refreshing its industrial capacity and manufacturers coasted on pricing and driving down the cost of labor. So, this rebar probably came from China, to help make my little part of America greater than it’s ever been before.

The ends of rebar, once cut with a chop-saw, take a pretty impressive edge. They’re a bit below razor sharp and they’re sterilized by the red heat as the chop-saw works on them. I did not enjoy working with the stuff, and I took the time to chamfer all the ends with an angle grinder – an unnecessary and annoying bit of detail-work for something I intend to literally bury in concrete. Walking past the assemblage, I stumbled and brushed against the end of one of the rebar and it cleanly sliced through my jeans and made a very fine little 4″ scratch on the back of my leg. Roll saving throw! I had managed to hit one of the ones I had not chamfered, yet, but only lightly.

I did the latticework mostly horizontally with a few risers near the middle, and the whole thing came out weighing about 175lb. It was a lot easier to move than a body, though, since I deliberately made the bars at the corners a bit longer so I could “walk” the thing by planting it on the corner post. Or, I could have, if the ground wasn’t soft and muddy and the post didn’t just drill right into the ground. So, like with a body, it was a matter of sucking up the energy and dragging it, then flopping it into the back of my car – which it fit perfectly thanks to an ancient technology known as “measuring.” I have only recently gotten into “measuring” and it turns out to be a very effective industrial tool. 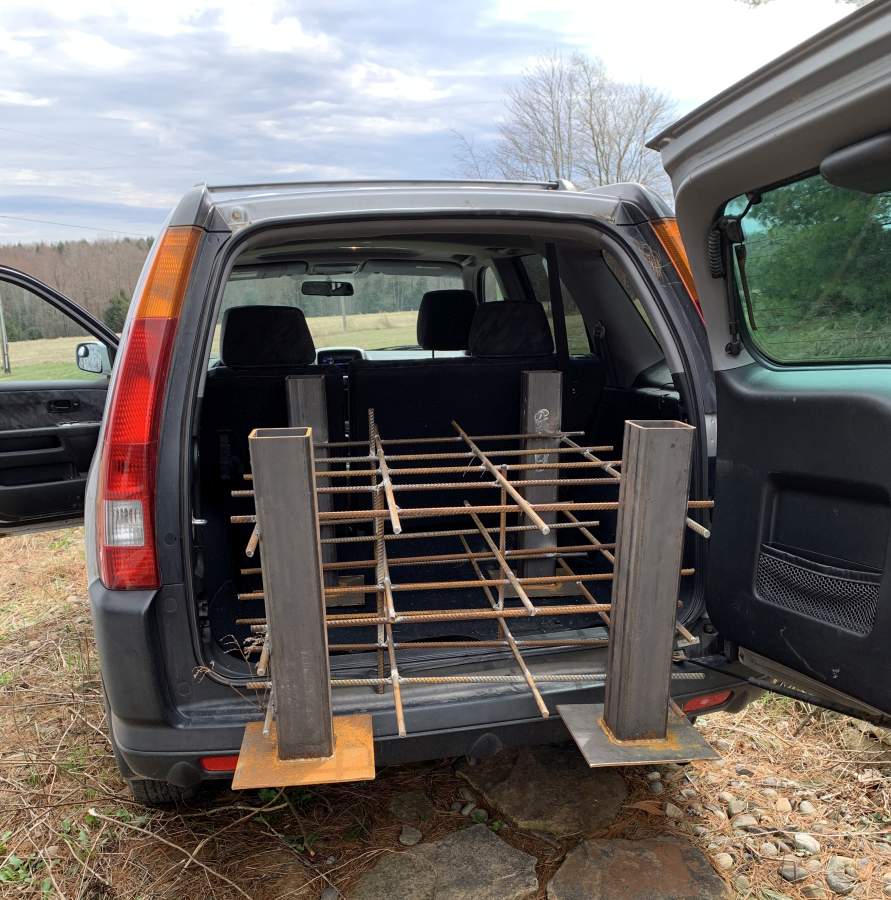 get in the back, jack

My attention was utterly consumed by not dropping that thing on my gouty toe.

Eventually everything was where it’s supposed to be. I have to visualize where the forge table, anvil, press, etc, will all fit. Since some of this stuff is going to be sunk in concrete, I will not have any opportunity to move it over a bit here or there. Everything needs to be close enough to be convenient, so I am not running around waving glowing hot metal, and far enough that I am not stumbling into things. 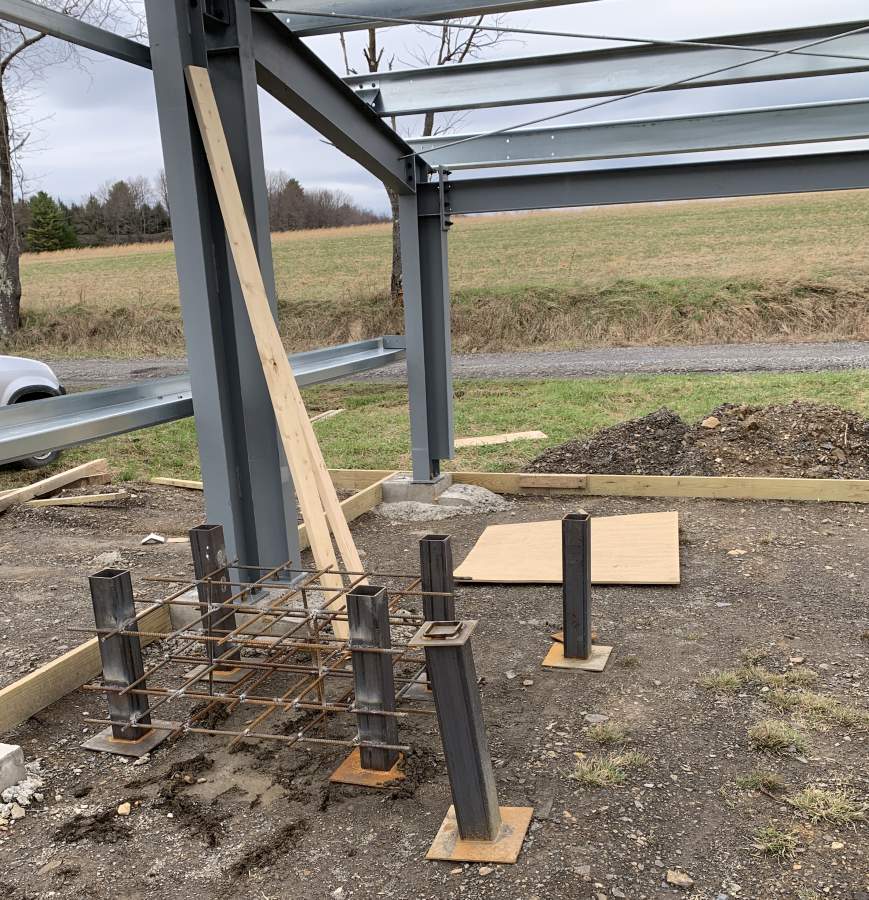 You may have noticed there are extra posty-thingies! There are actually four, but the other two are out of frame. While I was looking at the floor plan and trying to visualize where everything would go, I thought “post vise” and then maybe thought I could sink the post into the concrete! But I didn’t know for sure where I want it. And then it dawned on me that square steel 4″ x 1/4″ would hold a square steel 3″ tube and I could have a re-positionable accessory post system sunk into the concrete. If I want a mini anvil, or a post vise or something I have not thought of, yet, I can construct it right onto a post and I can move it or rotate it or whatever, and it will not flex in the slightest. I hope this turns out to be a smart idea.

The cap-thing on top of the post is supposed to be a plug for the floor hole, but the welds are on the outside so the plug doesn’t fit. It’s going to take some angle grinder time to fix that. Grr.

Lately it has been raining constantly, as is normal for this time of year. Ken’s going to get the concrete in whenever there’s a good break in the weather, but I told him not to rush and he’s not.

If you’re interested in materials, here’s a fun thing to look up: sodium silicate. AKA, “water glass” – it’s something I am capable of home-brewing (scarily, I have all the necessary ingredients in my closet of chemical hell) but it’s cheap enough that I bought a few gallons on ebay. Water glass is just what it sounds like: a liquid that solidifies to glass. I’m going to mop a couple of coats of water glass onto the concrete once it’s done; that will make it resistant to absorbing oils and fluxes and whatnot. I’m not worried about it being slippery because everything will have a layer of gritty scale on it pretty quickly.

The wooden rail is the form for the concrete pad, which we’re going to leave in place and use as a mounting for the siding at the bottom. Before the concrete goes in I’m going to paint the inner side with creosote and the outer side with gray water/bug/fungus blocking porch stain. Have you ever noticed how much pressure crouching and bending put on your toes? It’s surprising.

So, concrete, then roof and sides, then electric and it’s done and I can start finishing the interior.

I have other plans for the water glass. For one thing, I am looking forward to seeing what it does if poured into one of my silicone soap molds, such as (perhaps) the 9mm mold. If that works, I can see all kinds of other fun possibilities and the stuff is not very expensive (although I may brew my own if it comes to it – I have some large silicone life-cast molds that would look amazing cast with glass). Naturally, I will report on these things if and when they happen.

Speaking of bodies, if any of you have one you need to get rid of, there is a narrow window of opportunity here…

Tuck, My Fruck is Stuck » « Meanwhile, Everywhere Else in the World